Your Weight Will Fluctuate, And That’s Just Life 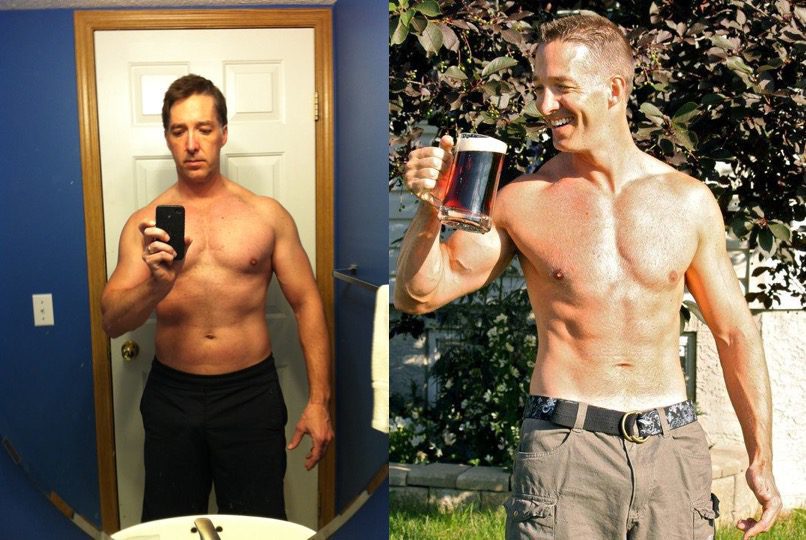 In about another month I should be able to fit into my favorite pants again. Well, they “fit” now, but they’re not as comfortable as I’d like.

One more month, barring life getting in the way, as it so often does.

I’m almost 50, and there is always an excuse. Sometimes it’s injury. Other times, stress. Followed by stress eating and stress drinking. Sometimes, I have a book deadline and can barely take a moment to exercise, let alone plan proper meals.

It all serves to make the flat belly less flat, more round. Some fitness folks call it “bulking,” that period of time when you significantly increase caloric intake in order to pack on muscle before the “cut.” I call it going off the rails.

I am a public figure in fitness who, at present, doesn’t quite look like the shirtless guy on the right in that feature photo. But I’m not as heavy as the photo on the left either. The right is from 2010, the left is from two years ago, when injuries and alcohol put my weight at the highest it had been in over a decade.

I often feel pressure to have that modest amount of abdominal definition all the time. I even feel a bit of guilt, despite all the extenuating life circumstances—advancing age included—that make such sustained leanness an exceptional challenge. I mean, if you saw my parents, you’d understand I’m not genetically programmed to have that low of body fat.

And now I’m out of the will.

I get disgusted with how the media expects celebrities to always look “perfect.” I remember a while back how they lambasted Vin Diesel for his belly. Whether he’s pitch-black space pirating, furiously drag racing or triple x pacifying, Diesel always looks buff and ripped. Except for a couple of years back when he was accused of having a “dad bod.” He responded by saying, “Body shaming is always wrong,” but at the same time, it seems he felt the public pressure and leaned up quickly, showing off his usual movie star physique in a “fuck you guys” kind of way.

This happens not just to Vin, but any celebrity. Especially women. Paparazzi relish in snapping that photo of some type of physical flaw to sell for cash. Cellulite exposure always generates a paycheck. A slight bulge of the butt or belly is gossip mag money in the bank.

I still remember the “scandal” over seeing Princess Diana’s cellulite.

Celebrities have trainers and chefs and are immensely motivated by being in skin tight clothing (or even no clothing) on the big screen, and they don’t look like that all the time. And the instant they gain a few pounds, photos are taken. Despite this intense pressure, they are still subject to being, you know, human. The horror!

Vin professed loving to eat, and that’s another thing I can identify with. But people who love to exercise a lot can often get away with a moderate amount of extra food inhalation without worrying too much about their weight because they’re just going to burn it off / turn it into muscle.

Except when you approach the half-century mark it gets harder.

Anyone who has spent a lifetime in the gym, such as Vin and I have, has accumulated injuries. Bodies don’t repair as fast as they used to. We can’t go quite as hard or bounce out of bed the next morning pain free and raring to go. You can fight a valiant delaying action against age, but age always wins in the end.

And so, if exercise is part of your weight maintenance strategy, any time you’re off your physical game, yet maintain the usual eating habits, the body puts on flab in a heartbeat.

The younger folks who live to exercise can afford less care and attention to their diets. We older ones, with each passing year, must become more aware and even restrictive in order to maintain our physiques. When we don’t, very quickly our pants feel tighter.

But it’s not always age that’s the issue.

In some cases of Hollywood physiques, the actor was asked to transform their body in an unsustainable way, like in the case of Gerard Butler in 300. These were not actors known for their fitness, and the months of intense training to get them camera ready felt like torture for many. It’s well known that Gerard has had his weight fluctuations, being accused of going from “Spartan to softie.”

And it was no different for the sequel. I interviewed the stars for 300: Rise of an Empire, and Callan Mulvey told me, “Everyone went straight to fat camp when we stopped filming.”

Wentworth Miller, star of Prison Break, was shamed for his weight gain after his lean and fully “tattooed” physique on the show became heavier. Miller used the shaming he faced as an opportunity to explain the hidden struggle of depression and how he’d been suicidal and sought comfort in food.

And in the case of Hugh Jackman, he told me his physique is ever-changing depending on the role. Sometimes he’s Wolverine, and other times he’s dancing in a Broadway show eight hours a day and melting off muscle.

Weight fluctuations, especially ones that involve gaining fat around the midsection, can be a pain for no other reason that your wardrobe suddenly becomes limited. I must say I’m looking forward to doubling the number of pants I can comfortably fit into once this belly is back where I want it: vaporized into the air via daily runs and lifting sessions.

The most important thing you can do to avoid weight fluctuation is learning how to control your caloric intake, especially in times of reduced activity. If you create a habit of eating whatever you want because you train so hard, then if you’re injured or sick it can be challenging to suddenly have to switch into a restricted eating mode to prevent fat from piling on.

You may be young and feel invincible now, but with each passing year your ability to sustain a punishing “eat whatever the hell you want” exercise regimen decreases, and if you don’t in turn adapt your diet, you’ll find it more difficult to keep those pounds off.

There are a lot of retired dancers who suddenly put on a lot of weight, because they stopped training for several hours each day, but didn’t change their eating habits.

And it’s not just physiology slowing you down, but life. Career and kids can often make exercise take a back seat. Other times, you just psychologically need a break. After years of being a fitness demon, you might just get burned out and need a few months off.

So, while you may be Captain Hardcore now, it’s good to be mindful of the future and what can happen if you think you’ll always be able to belly up to the bar and buffet with no consequences.

Your weight will fluctuate. That’s life. Don’t let it get you down, and don’t let it make you feel like a failure or that you must maintain a certain measurement or body weight.

You can always buy more pants.