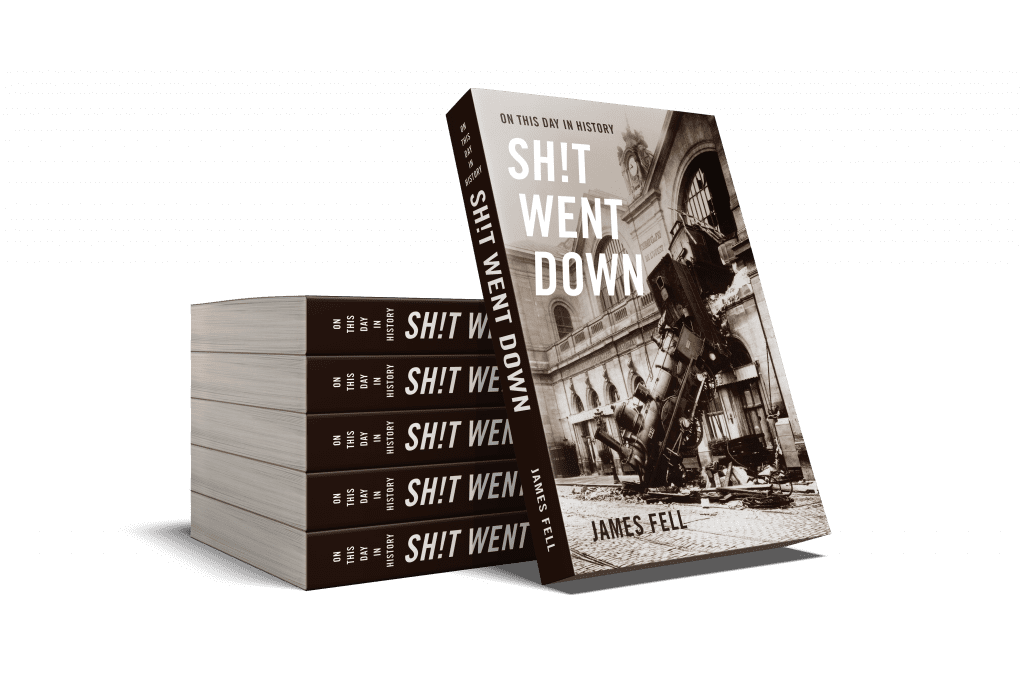 Scroll down for links to buy

I can’t believe I have to say this, but Nazis are bad.

There are no “very fine people” among them.

If you disagree, you won’t like my books. Also, fuck you.

Still here? Cool. Thus far I have published one sweary fucking history book, with the second coming later in 2022.

Mae West was sent to jail for “corrupting the morals of youth” with her first Broadway play. When participation in the Hitler Youth became mandatory in Germany, groups of teen “pirates” rebelled. Muhammad Ali refused to “drop bombs and bullets on brown people” in Vietnam. A dog sled relay carried life-saving medicine 674 miles through –50 temperatures to rescue children dying from diphtheria. The Dionne Quintuplets were stolen by the Canadian government and displayed like zoo animals for profit. Indian princess Noor Inayat Khan was one of the most successful spies against the Nazis in World War II. A children’s television show called Caillou tortured parents for more than a decade . . .

Sh!t goes down every single day of the year, year after year. Sometimes it’s a battle that changes the course of history, other times it’s a life-saving medical advancement. Bravery is counter-balanced with cowardice. There is slavery and there is self-sacrifice. History is replete with deeds both noble and despicable. Some were motivated by greed, others generosity. Many dedicated themselves to the art of killing, while others focused their efforts on curing. There have been grave mistakes and moments of greatness. Confrontation and cooperation.

Early in the twentieth century Spanish philosopher George Santayana wrote, “Those who cannot remember the past are condemned to repeat it.” But history serves not just as a warning; it also offers encouragement. Humanity is not endless suck. There is inspiration to be found amidst the atrocities.

On This Day in History Sh!t Went Down will significantly expand your knowledge of world history in the most hilarious and profane way possible. 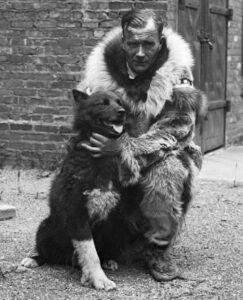 See this fuzzy boy? He was a good boy. A boy who risked his life to save many others in what became known as the 1925 Serum Run. His name was Balto and he was a Siberian Husky who led a team of sled dogs through horrific winter conditions into the remote town of Nome, Alaska carrying life-saving medicine to halt a diphtheria outbreak.

I’m Canadian and have done 10 kilometer (6.2 miles) runs in –30 Celsius (–22 Fahrenheit). It’s cold as fuck and frosts up the eyelashes so you can’t see for shit, and people call me crazy and they’re probably right about that. Anyway, for this tale it was –46C (–50F), because it was way the hell north at the edge of the Arctic Circle and the temperatures were at a 20-year low. Add in brutal winds, deep snow, and non-existent visibility and you really just want to stay home and drink whiskey.

But children were dying; the disease spreading.

The outbreak began in January, and the small town’s sole doctor sent a desperate telegram calling for aid. The nearest place that had serum that could halt the outbreak was located in Anchorage, but the engine on the only airplane that could fly it to Nome was frozen solid. Officials brainstormed and decided to send the serum north to the city of Nenana via train, where relays of mushers driving sled dog teams would take it 674 frozen-as-fuck miles west to Nome.

One-hundred-fifty dogs participated in the relay. Some of them died so children could live. Of more than 20 mushers, most of them Native Alaskans, several suffered frostbite. The trip was made in a record-breaking five-and-a-half days.

Norwegian musher Gunnar Kaasen and his Balto-led team made the final leg of the perilous journey. He was supposed to be the penultimate musher, but when he arrived at Point Safety at 2:00 a.m. he discovered his replacement was asleep, so he pressed on an additional 25 miles to Nome, arriving at 5:30 in the morning on February 2, 1925.

The serum was thawed and administered, and there were no further deaths. Kaasen and Balto became heroes. There is even a statue of Balto, who lived to be 14, in New York’s Central Park. Balto was indeed a good boy, but his public status was achieved via being the one to lead the final leg. The best boy on the perilous journey was Togo. Balto traveled 55 miles, but Togo, also a Siberian Husky, led a team for almost five times that distance. He ran a whopping 260 miles, almost 40% of the entire relay. And he was 12 years old!

Togo lived to be 16 and sired many puppies. One of his direct descendants, Diesel, starred as his multiple-great grandfather in a 2019 film titled Togo alongside bipedal actor Willem Dafoe. It’s an excellent movie. Have tissues ready. 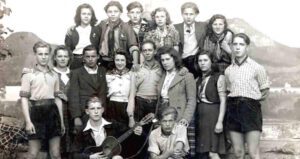 Imagine this. It’s 1936 and you’re a teenager in Hitler’s Germany. Membership in the Hitler Youth has just become mandatory, but you say no fucking way because fuck that Nazi bullshit. What do you do? Answer: you become a pirate.

At the time, you were allowed to leave school at age 14, but if you were 17 you were going to get conscripted. If you stayed in school, you’d be forced into the Hitler Youth in order to be indoctrinated into Nazism and work to convert others into the murderous cult. Many young people quit school and formed their own resistance group called the Edelweiss Pirates, and they loved to punch Nazis.

Besides the whole allegiance to Hitler stuff, being in the Hitler Youth sucked. It was highly regimented fascist paramilitary bullshit and totally the death of fun. Hitler Youth was boys only; girls were made to be part of the League of German Girls. Edelweiss Pirates were all about freedom of expression and growing long hair and mixing genders and fucking up those Nazi punks.

They numbered in the thousands, and in addition to just enjoying being teens and playing that “degenerate” jazz and blues music and exploring their sexuality, they’d hunt down Hitler Youth patrols and beat the shit out of them on a regular basis. The pirate slogan was “Eternal War on the Hitler Youth.”

Before the war the pirates were seen as little more than an irritation, but during the war they did things such as gather up Allied propaganda dropped by airplanes and push it through people’s mailboxes to spread the word that Hitler was bad. They also helped German Army deserters disappear. They added sugar to the gas tanks of Nazi vehicles, pulled down Nazi flags, and even derailed munitions trains. On October 25, 1944, the Nazis finally took them seriously and Heinrich Himmler, Hitler’s right-hand man, ordered a crackdown. The following month, 13 people, many of them Edelweiss Pirates, were publicly hanged in Cologne.

The Nazi regime kept up the pressure on the Edelweiss Pirates, imprisoning many and even sending some to concentration camps, but their spirits would not be broken. History was unkind to the pirates, viewing them as criminals rather than a true resistance group. But efforts have been made to rehabilitate their image and view them as an important part of resistance to fascist authority during World War II.