Which is Worse: Paleo or Palin? 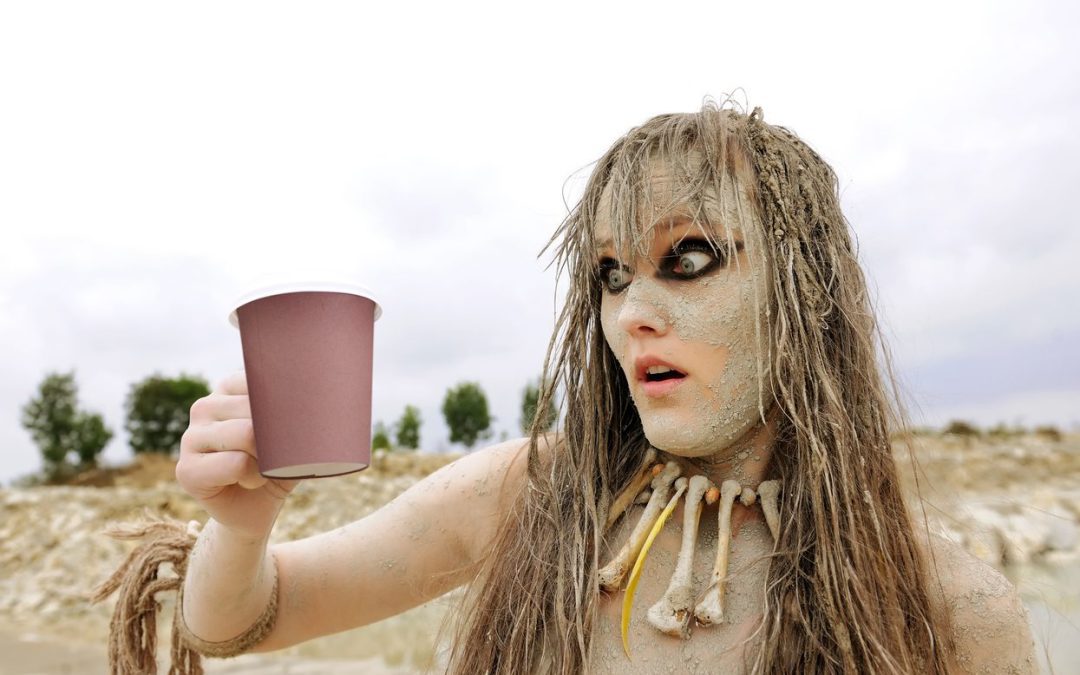 Paleo jumped the shark late in 2013 with the marketing of “paleo water,” and last January Sarah Palin got too crazy even for the most ardent of FOX News watchers with her speech at the Iowa Freedom Summit. After watching parts of it I thought some thrombolytic therapy was in order; the woman looked like she was having a stroke.

Fad diets come and go, as do evolutionarily challenged politicians, but which has more negative impact on society during their tenure in the spotlight? Which is worse: Paleo or Palin?

I have a question about The Holy Grail. It’s that scene with Michael Palin, during the tale of Sir Galahad, where lonely, beautiful women in Castle Anthrax surround him and they are all hungry for his attention. This is the part I wonder about:

DINGO: Yes, yes, you must give us all a good spanking!

DINGO: And after the spanking, the oral sex.

My question is: who is going to perform oral sex on whom? You might think a castle full of only women might be tired of that.

Anyway … Michael isn’t the Palin we’re talking about here. That dude is awesome. It’s Sarah getting put under the microscope.

Okay, there is all the stuff about her being keynote at the first Tea Party convention, where she called the movement “the future of politics in America.” She also opposed healthcare reform and used the term “death panels,” opposes a woman’s right to choose to end a pregnancy including in cases of rape and incest, supports discussing creationism alongside evolution in public schools, opposes same-sex marriage …

I wanted to put that stuff on the record, and you can judge for yourself, but where I want to focus is her position regarding the environment.

She has a “drill here, drill now” attitude about oil, even in the wake of the Gulf oil disaster, and is cool with drilling in the Arctic National Wildlife Refuge. More important is that Palin considers environmental protection laws to be a burden on the economy and said that the studies supporting human contribution to global climate change are “snake oil science.” This is despite the fact that 97% of climate scientists agree that global warming trends over the past 100 years are “very likely due to human activities.”

Conversely, in the recent State of the Union speech President Obama said, “No challenge  poses a greater threat to future generations than climate change.”

Ah, the paleo diet, where any brainless fuckpuddle with a blog can reinvent history and wax poetic about a 35-year life expectancy.

One negative aspect of the paleo diet is that it is just damn annoying. It’s become an old joke now: “How do you know if someone is on the paleo diet? Don’t worry, they’ll tell you.” But despite its diehard adherents, the diet kind of sucks.

Recently, U.S. News and World Report asked a panel of 22 nutrition and health experts to analyze 35 popular diets. Paleo tied for last place with the Dukan Diet overall, and came in dead last as a weight loss diet.

One panelist reported, “My main concern with Paleo is that it emphasizes this all-or-nothing mentality that is hard to sustain,” and another said, “Any diet that limits an entire food group is a huge red flag.”

Still, probably better than what your typical American eats, right? Well, not if it leads you towards developing an eating disorder. Last fall I spoke with a couple of eating disorder doctors (for this NPR article) who both explained that eating disorders have seen a shocking increase in recent decades due to a rise in obesity rates coupled with an explosion of fad diets.

Here are some sobering statistics:

Besides just sucking, the all-or-nothing mentality and the restriction of entire food groups with a focus on eating the “right” foods and staying away from the “wrong” ones puts paleo in the path-to-eating-disorder camp that eating disorder physicians caution against.

Obesity is a major problem that is killing a lot of people right now. The food and technological environments that encourage overeating and discourage movement are primary contributors to this. But corruption in the weight loss industry and continual pushing of gimmicky, fad diets are things that help keep people fat. As shown above, their blind restriction mentality can also lead to eating disorders, which are a growing problem in society.

The high popularity of the paleo diet means that it unquestionably has lead to the development of eating disorders, not to mention that it has been chosen over more rational approaches to eating that more likely would have lead to sustainable weight loss. But how do such negative aspects rank against Sarah Palin?

Palin’s influence is on the wane, and paleo will go the way of the blood type diet before long. (Anyone remember that one? The book sold 7 million copies.) For purposes of this analysis, Paleo and Palin are both analogues. Paleo represents a corrupt diet industry, and Palin represents a “profits before planet” political mentality.

And it’s pretty clear which is worse.

Palin “wins” as worse because of the massive jeopardy such thinking places us all in. Here are some depressing links for your perusal:

My kids are teenagers. I’d like to have grandchildren one day. I fear for the planet they shall inherit.

Previously in this series – Which is Worse: Food Babe or Food Poisoning?

Up Next Time in this Series – Which is Worse: Anti-Vaxx or Antimatter?