What is the Secret to Happiness? 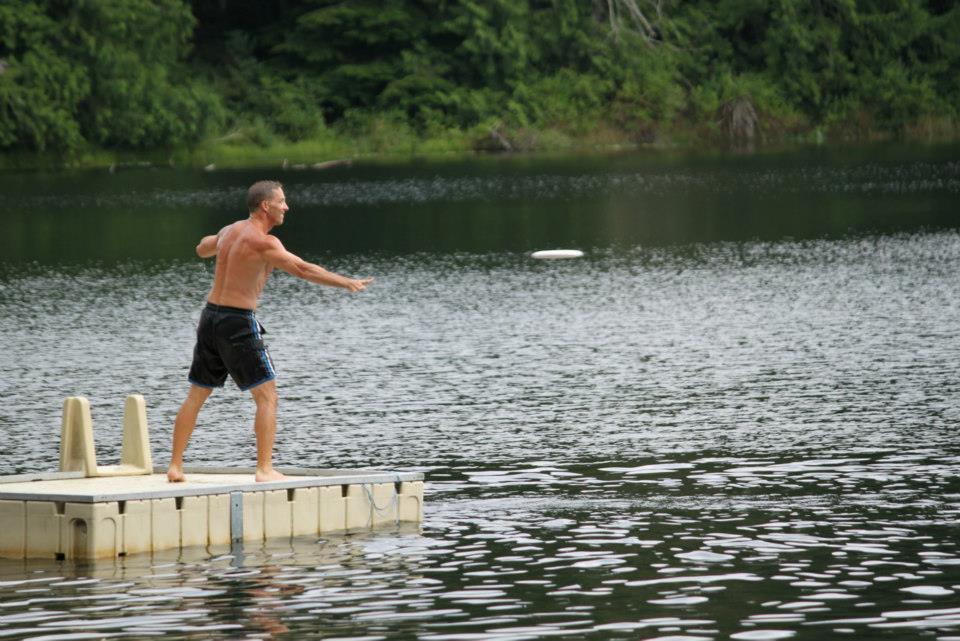 My thirteenth year of life was pretty horrible. I was one of the least popular kids in my school. Friends were few. I was a lousy student, unathletic, and weird. Still, one of my fondest memories comes from that time.

My parents were divorced and a portion of each summer was spent with my father in northern British Columbia. The summer before eighth grade my father and I pulled several rainbow trout out of Takysie Lake, and as we were putting the canoe back on top of his old Ford truck – a four-speed transmission and the first vehicle I’d ever been behind the wheel of – the rain started to pour.

The skies opened up in an instant, and I could tell we were in for a good soaking. My dad said, “No sense in both of us getting wet. You get in the truck and I’ll tie her up.”

I watched him as he ran around the truck tying the big red Coleman into place, and at one point he stopped, looked up at me, and gave me a goofy smile as the rain soaked through his now-departed hair and drenched his shirt.

There it was: A perfect moment. I savored it, because it meant I had a cool dad who loved me.

I used to think happiness came through accomplishment. But lately I’ve realized that accomplishment is only a platform that allows me not to stress too much. To quote my dad, “I sleep warm, dry, and with a full belly every night.” Many don’t, which lends perspective on what you really need out of life as a foundation for happiness.

On this list of the happiest countries, the United States didn’t make the top 10. I believe some Americans pay too much attention to future achievement and acquisition – questing for the American dream – and so today suffers for it. I’m not down on ambition. I encourage it. But don’t let it rule you. Don’t sacrifice what’s happening right now, in front of you.

A 2010 study of 282 people published in Personality and Individual Differences looked at wellbeing via the use of savoring strategies. It boils down to focusing your attention on positive events at the time that they take place. Ruminating about it in a positive light afterwards is good too, and so is telling others about it. (Thanks for reading my fishing story.)

The same study found that being distracted (stop checking your phone every two minutes) and having negative ruminations about past experiences created lower life satisfaction. So, pay attention to the good stuff that is happening right now, and when bad things happen, do your best to let go of it.

And while being poor black-hole-gravitational-field sucks, another 2010 study published in Psychological Science found: “money impairs people’s ability to savor everyday positive emotions and experiences.” A 2015 report of three studies published in Personal & Social Psychology Bulletin sheds some light by finding that a wealth of personal experiences diminishes everyday savoring ability. In this example, when you use wealth to travel the world, the everyday can become mundane.

I have ambition, there are many things left on my life’s to do list, but I’ve since come to realize that such accomplishments aren’t the emotional and psychological victories I imagined they would be. They are just another achievement among a list of achievements. I qualified for and ran the Boston Marathon. It was cool and fun and gave me good writing material, but I think I’d be just as happy had I never done it. I’ve interviewed plenty of Olympic champions along with movie, TV and rock stars – even getting to sit down for a one-on-one with a musician I practically idolize – and while it’s cool and good for my profile, it’s still part of the job.

Last night I was backstage before the Def Leppard concert. I got to watch the sound check, meet the lead singer, interview guitarist Phil Collen and meet his lovely wife Helen while we sat inside a posh tour bus. Then Phil gave me a kickboxing demonstration and I got free tickets to the show. It was good fun and an interesting experience, but it was topped by the fact that when I got home, reeking of beer, my wife still wanted to cuddle.

When I think back of all the great moments in my life, they’re rarely tied to some big accomplishment. I’m reminded of that song “Victory Day” by Tom Cochrane and Red Rider, which proclaims:

She says life isn’t big, no, it’s kind of small
Made of small moments, they’re all strung together
If you don’t look out, you might miss them all
Then it’s just passed you on by like the river

I remember the first time I kissed my wife over 25 years ago. I remember the look on her face two weeks later when I asked her to be my girlfriend, and the catch in her voice when she said, “Yes.” Those were small moments impossible to miss; and meant to be savored.

Last fall I was at the Sarah McLachlan concert with my daughter (another person I’ve interviewed, but whatever), and at one point Sarah was at her grand piano, her voice clear and pure. The lighting effect made her appear an angel. Her voice sure sounded like one. At that moment I thought I might weep, then my daughter leaned her head on my shoulder and said, “I love you, Daddy.” I did not believe my heart could soar higher, but it found a way.

That was a perfect moment.

A couple of summers back my son and I were playing Frisbee on a lake, he on one dock, me on another. I flubbed a throw and my son ran across his dock, dove through the air and made an amazing catch right before hitting the water. He broke the surface with the Frisbee still in hand and yelled, “Did you see that?”

I had seen it, and savored it.

Several years ago I was skiing through deep powder with my best friend, Craig, nary a cloud in the sky. We came to a stop at the top of a ridge with an amazing view and I said, “It doesn’t get much better than this.” He reached into his backpack, grabbed a Big Rock Traditional and tossed it to me, saying, “Yes, it does.”

Three days ago I was riding my bike with a view of the Rocky Mountains. My iPod selected “The Spirit of Radio.” My legs felt strong and the path was smooth new pavement with just enough twisting to make it fun. I stopped thinking about writing for a couple of minutes and reveled in the exertion.

Happiness can be found in the small moments that happen each day. A kid that enthusiastically greets you when you get home from work, good cuddles, great sex, good conversation after sex, holding hands, making your child laugh, petting a dog, that feeling when you finish an amazing book … I don’t know where I was when I read the last page in the final book of David Eddings’ Belgariad, but I remember what it felt like.

What is the secret to happiness? There is no definitive answer, but I think life seems more valuable when you decide to savor those small and precious moments on a daily basis rather than always concerning yourself about that next big victory day. These moments all string together and become your unique life. Decide not to miss them, and perhaps happiness will follow.

Dear Reader: Consider taking a few minutes to reminisce about a positive moment in your life that you savored. Feel free to share it on Facebook here.