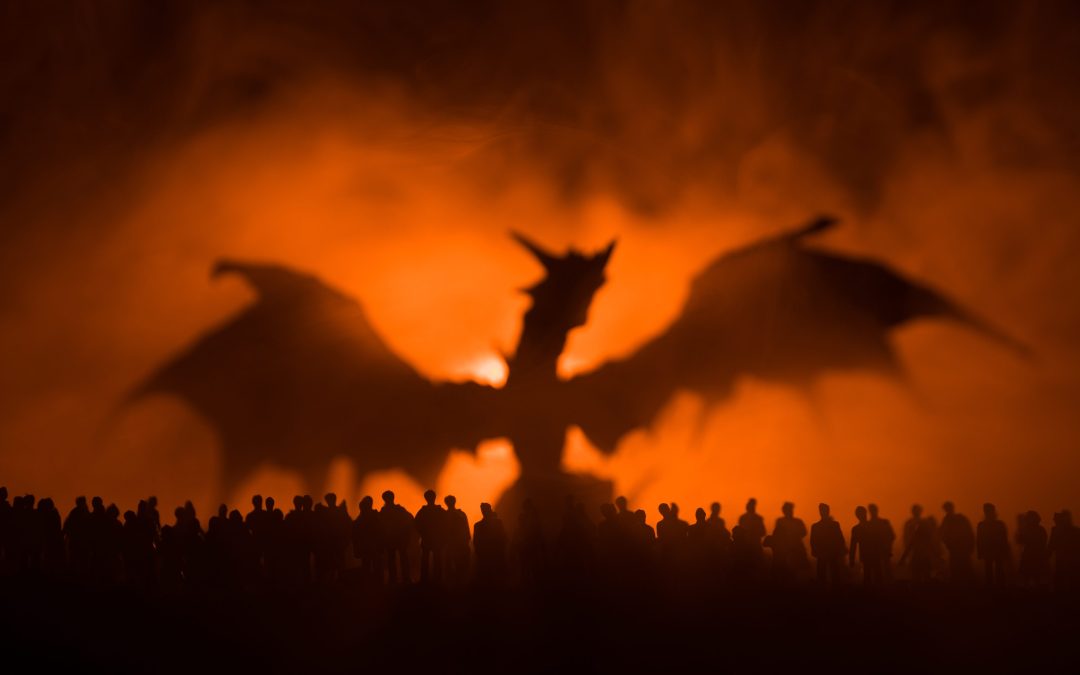 If you haven’t seen it yet, don’t read this. I’m just going to keep typing some stuff for a bit in case you got here by accident because I don’t want to ruin season 8, episode 5 for you. So, let’s talk about dogs for a minute. Aren’t dogs awesome? GoT definitely needed more dogs. Dogs dogs dogs. I wrote a piece recently for the Chicago Tribune about how dogs saved some people’s lives. Check it out, and get the tissues ready.

Okay. Down to business.

Life usually doesn’t have a Hollywood ending, and military history is not rife with people hugging it out to resolve their differences.

Just FYI, I have a master’s degree in military history.

And the comparison to real military history is what I’m going to focus on. Not the sloppy execution of this season. Not the crammed writing (we could have used ten episodes, easily). Not that bullshit about how Sansa actually seemed happy about all the horrors she experienced because it somehow made her stronger (previous episode). Not the sexist bullshit tropes about how the male leaders are the ones more or less keeping their heads and the women are just ever so fragile and snapping because it’s war. And not the stuff about how zombies are supposed to fucking die when you stab them in the brain. (But if you want to gripe about all that shit in the comments, go big. Chances are, I agree with you.)

What happened in that episode last night was predictable to anyone who has studied military history.

I stopped thinking we were going to get a happy Hollywood ending from the moment Ned Stark died. Martin based a lot of GoT on The War of the Roses, and there are plenty of examples of how he didn’t fall into the typical fantasy trap of pure good vs. horrible evil. People are complex. We hated Jaime. Then we hated him a bit less. Then we grew to like him. Then, well, fuck. I guess he never really changed that much anyway.

I took a shit-ton of military history courses covering the rise and fall of empires from across the ages, but my specific thesis was about the civil war in Guatemala and how the U.S.—the supposed “good guys”—helped install and prop up genocidal dictators for decades because communism made them poop their pants.

And when I write “genocidal,” I mean motherfucking genocidal. Guatemala is 41% Amerindian and 41% Mestizo(mixed race between Amerindian and European). A small portion of the 18% who are of European descent control the vast majority of the wealth. More than half the population lives below the poverty line. There were decades of various reigns of terror because of the simple reality that there are people who crave power and will do anything to attain and retain it. And murdering the shit out of anyone who opposes you is a proven method of getting what you want. History is full of strong-arm military dictators living long and lavish lives because they destroyed all opposition and ruled through fear.

Anyone remember what Stalin did when there was opposition to his rule after he took charge? Anyone? Bueller? He ruled one of the largest nations on earth for over 30 years and died of natural causes because he secured his rule via a purge that makes those Purge movies look like kindergarten. Looking back through history—especially in pre-industrial times when people fought with swords and shields (but no dragons, alas)—this type of thing wasn’t at all uncommon.

A military advantage is a military advantage and people will use it if it serves their purposes. Look at Genghis Khan. He had a highly disciplined army that was used to living in the saddle and were such accomplished horsemen they could ride and accurately shoot arrows at the same time. They were the fast and furious high mobility fighters of the day, and their enemies were often swarmed and rapidly destroyed via their ability to execute complex battle tactics by working as a cohesive military unit. And since Daenerys used the “nuclear option” with her dragon, if you want to read my piece about why the U.S. nuked Japan, here it is. TL;DR: it had less to do with “saving American lives” via continued conventional war with Japan and was more about the strategic value of scaring the shit out of Russia with a mushroom-clouded display of “Look what we built, ya commie fucks.”

Anyway, I’m getting away from the point. And that point is that everyone who named their kid Daenerys is pretty damn pissed off right now. But she did nothing that the majority of rulers of her “time” would not also have done.

Plenty of self-styled “freedom fighters” throughout history have begun from a place of good intentions, only to become worse than those they replace. It happened All. The. Time. 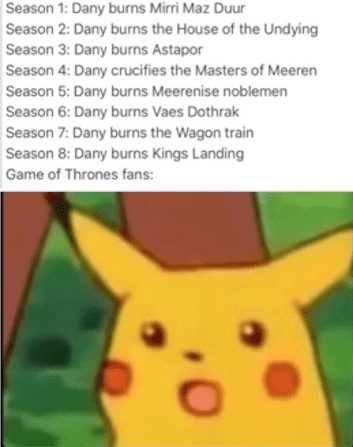 And despite the fact that they crammed way too much stuff into too little time this season, and that the character arcs are kinda fucked and the sexist tropes are rampant, she did what history would dictate made perfect sense.

Because her options were go nuclear, or die.

And it’s all Jon’s fucking fault.

But George didn’t want to write the Belgariad. Jon rejected her and she was left with one option.

Jon had a better claim to the throne. The secret was out. She would never be safe.

The population of Westeros was now her enemy.

I repeat: THE POPULATION OF WESTEROS WAS NOW HER ENEMY.

If she wanted to rule—if she wanted to live—she had to do what she did and rule by terror because she no longer had a legitimate claim to the throne. She had to make opposition to her seem so unthinkable that no one would ever challenge her.

She didn’t snap. This was a rationally murderous decision that just about any military leader who wants to achieve and keep power would use. She fucking telegraphed it after Jon rejected her by saying she’d have to rule by fear. She knew it was her only option. If anything, that moment when she “snapped” was her girding herself to do the horrible thing she knew she had to.

If you don’t want to read my prediction for the final episode—what I think should happen if we’re using human history as a guide—then stop reading now and go to the page to buy my fucking book instead.

Next, Dany should purge any leader who could possibly threaten her. Jon needs to die first. Tyrion? Dead. Sansa? Fucking dead. Burn all of Winterfell and Bran and the whole bit. They don’t need to fear the White Walkers any longer. Install puppet leaders in various kingdoms. Rule via terror.

And if she does that, she will likely rule long and die in her bed an old woman.

Except for one thing. There is no killing Arya.

My prediction for the final episode is that Daenerys will do all what I just wrote to secure her spot on the throne, and we will be left with a final scene of Arya sharpening her weaponry, a murderous gleam in her eyes.

Arya didn’t get to kill Cersei. But the show will provide another queen for her to kill.

Okay now you can go buy my book.