This One Word Defines How Men’s Rights Activists See Women 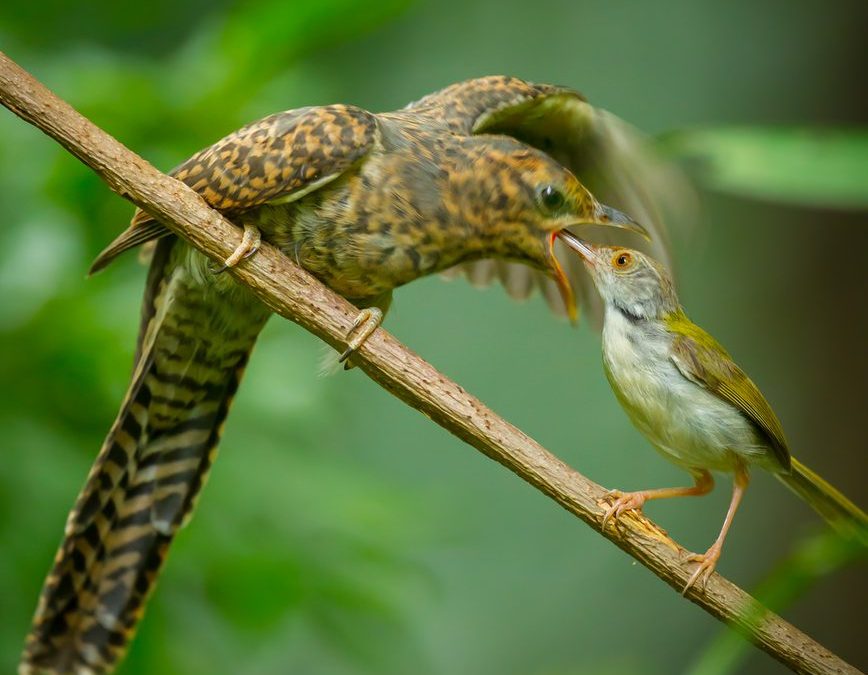 It’s not a new word. In fact, it’s been around for some time in reference to a specific type of brood parasitism.

Brood parasitism is when one animal dupes another animal into raising their offspring for them. For example, there are “monogamous” bird species where the female will copulate with males who are not her regular mate, and that mate ends up helping to raise those young even though they are not genetically his.

No word on whether the duped male bird knows of his partner’s infidelities and rages on Internet message boards about it.

There is another form of this called interspecific brood parasitism where one female bird will lay her eggs in the nest of another female in order to have that female raise her offspring for her. It’s quite common in ducks, and can even cross species lines.

For example, some cuckoo birds are interspecific brood parasites. The image at the top of this article shows a reed warbler raising a cuckoo.

In the case of the cuckoo, considering that we’re talking about laying eggs in another’s nest, and not actual ornithological infidelities, the choice of this species to describe the human phenomenon of “cuckoldry” isn’t that accurate.

But then again, men’s rights activists are seldom concerned with accuracy.

I’m not one for trigger warnings, but shit is about to get gross, because we’re talking about MRAs here. If you’re new to my writings on this subject, here is a primer I wrote for TIME Magazine, and here is a more descriptive follow-up.

They often shorten the word to “cuck,” and a guy who shows respect for the rights of women is often insulted as being one. Sometimes they’ll add in “beta,” because a man whose woman is messing around on him is obviously not alpha.

I’ve been called a “beta cuck” by MRAs a number of times.

I should mention that cuckoldry is a fetish for some consenting adults. People are allowed to do that.

Recently, my friend who runs the popular Facebook page The Skeptical Beard, posted a photo of himself wearing a T-Shirt in support of basic human decency that said “Cleavage Is Not Consent;” an argument against those who would say that a woman’s choice of attire can imply that she is “asking for it.”

And he got called a beta cuck on his page for wearing it, plus other terrible things. The comments were filled with misogynistic shitheads.

It is worth noting that MRAs also seem to be fascinated with the race of the man a woman cuckolds her husband with. Apparently it’s even more offensive to the cuckolded if the man she cheats with is black. Reference to size of genitalia is often included in such insults.

And this fascination with cuckoldry says a lot of the so-called men’s rights movement. They’re constantly warning about how women are enslaving men and using them and their hard-earned money to raise children that are genetically the offspring of some other man.

They see women as wholly untrustworthy; they also see men who do trust women as fools.

Who wants to bet that some MRA is going to quote me out of context like this: “my children aren’t my biological offspring. I’m a beta cuck.” – James Fell

Let’s look at the interest in the word “cuck” over the past several years, via Google Trends.

This rising fascination with cuckoldry shows that MRAs see women as property that can’t be trusted. Not only that, but the worst thing you can do to a man is have sex with his wife, because you’ve defiled that property. Bonus points if you impregnate her and dupe this cuck into raising your offspring.

I’m not saying it doesn’t actually happen. Yes, there are women who cheat and there are men who end up raising children they believe to be biologically theirs but are not. Men cheat too, just FYI.

Some MRA once created a meme quoting me, alleging that I am actually an MRA, because I wrote somewhere that a man shouldn’t be forced to pay to raise a child that isn’t his, but these words were taken way out of context.

The example I used referred to a married man who suspected his pregnant wife of cheating. I said he had the right to a DNA test shortly after the birth of the child, and that if the DNA test showed he was not the father he would be allowed to refuse to have his name on the birth certificate, and that he should be able to divorce his wife, not interact with the child, and not be on the hook for any child support.

But this changes when a man assumes the role of a father, regardless of DNA. I was clear about this in my post, but the MRA conveniently left that part out.

In short, when you assume the role of Dad, you are one. Being a dad comes with great benefits, and also responsibilities. If you later find out the child is not made from your genetic material, too bad. It shows that, if strict monogamy is of value to you, you chose poorly in your partner. The child is blameless, and if you’ve been raising and loving the child for years, then what kind of man would then be willing to walk away from that kid regardless of biology?

MRAs see cuckoldry everywhere because they see women as nothing more than manipulative harpies who wield their vaginas like weaponry for their own advancement. For the MRA, they view marriage as perilous because there are supposedly many women who are looking for some “beta” male to take advantage of. She’ll only occasionally and begrudgingly sleep with him, sponge off his income, sleep with other men and get her husband to pay for the raising of offspring that are not genetically his.

They talk about this stuff ALL THE TIME! Coincidentally, the most popular leader in MRA, Paul Elam, accused his wife of lying about being raped (this at a time when DNA tests did not exist) so he could get out of paying child support.

It’s a seriously warped view of women and humanity. It doesn’t seem to occur to these guys that most women love their husbands, and want to give birth to their husband’s children and raise them together as a family. It also dismisses the reality that many people raise and love children they know are not their biological offspring. My stepfather loves me despite not being his biological child, and I’m pretty sure there are lots of adoptive parents who love their children.

Also not considered in this context are people having the right to open relationships. It’s not cheating if everyone is willing and playing fairly by the rules they’ve designed themselves.

But with MRAs it’s always some kind of worst-case scenario and vaginas as property and I’ll be damned if I’ll be on the hook for some other man’s sperm. Because thinking otherwise would require them to view women as actual human beings.

And that’s something they just don’t seem capable of.