﻿The Peril of Being an Opinionated Woman on the Internet 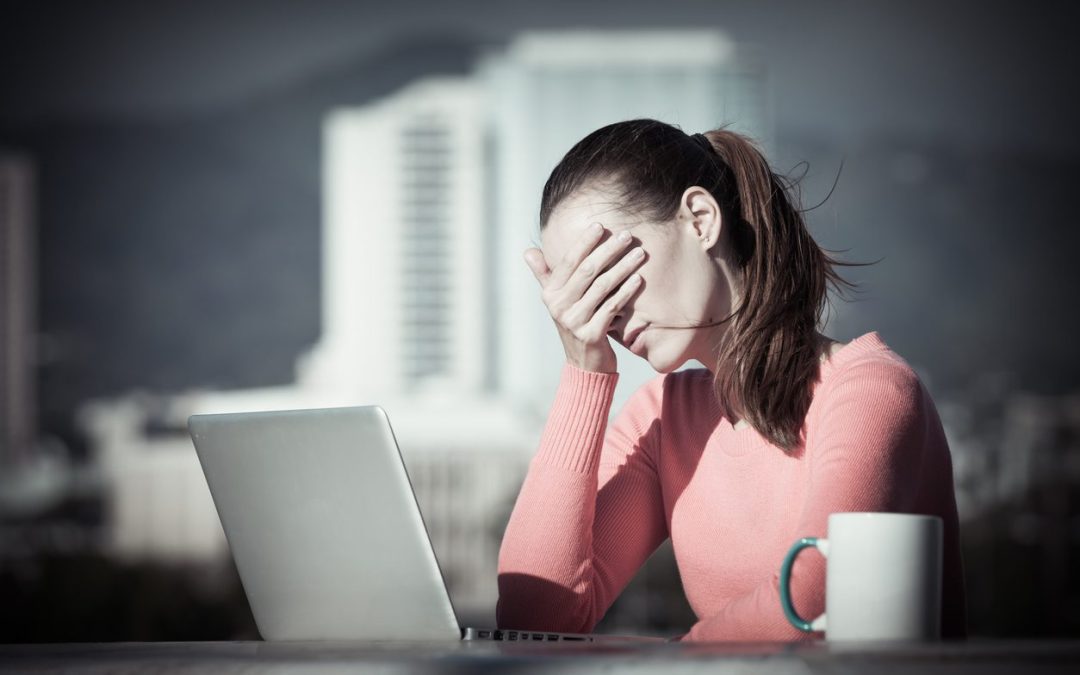 I know opinions. I have the best opinions.

Being opinionated is not a bad thing. Even women should have opinions. Otherwise, life becomes a scene from Coming to America. Remember the meeting with Imani, the woman Eddie Murphy’s character Prince Akeem was supposed to marry?

Prince Akeem: What kind of music do you like?

For some men, they’d see Imani as the perfect woman. They think women should keep their opinions to themselves. On the internet this is especially so because of how the anonymous nature of the medium permits those who shout women down to be extra vile in their misogynistic attacks.

Egregious behavior against outspoken feminists are commonplace, such as in the cases of Lindy West and Anita Sarkeesian. There was also the backlash that we’ve come to expect over the rebooting of Ghostbusters with an all-woman cast. Couple in racism with the misogyny and it got star Leslie Jones to quit Twitter.

But it’s not just feminist writing or rebooting beloved franchises that draws such ire. Any opining a woman does is open to sexist criticism in a way men don’t experience.

I am a dick with a dick. I piss off everyone. I go after men’s rights activists, CrossFit, paleo, low carb, The Biggest Loser, people who engage in body-shaming, multi-level marketers of weight loss shakes and body wraps, Nickelback … and many people read it.

I get a bit of hate for it, but not much, and it’s mostly tame. Why do I get off easy? Because white and penis. I guess the “and” part is superfluous, as it stands to reason that any white penis would almost certainly be attached to an equally Caucasian frame.

Anyway … I interviewed five knowledgeable, professional women who revealed to me the vile, violent and gender-based onslaught they’ve had to endure simply for speaking up online while female.

KATHLEEN SMITH – POLITICAL / SOCIAL COMMENTATOR
“I’ve had rape threats against me and my daughter.”

Kathleen came under fire from oilfield workers in Alberta because, while being on their side, she had the audacity to question the methods used to promote the province’s oil patch.

There is a man who goes by the moniker “Bernard the Roughneck” who went to Canada’s parliament hill to address government policy about Canada’s oil industry dressed like he just stepped off an oil rig. 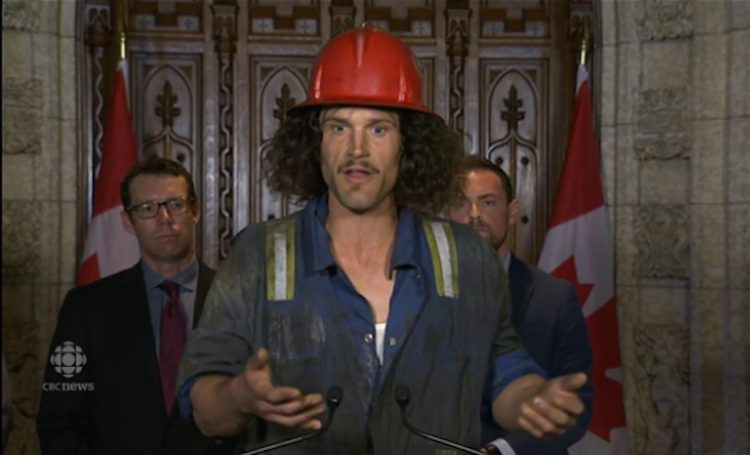 He said, “I’m not a guy from Calgary in a suit. I’m not a guy who’s knowledgeable about public policy or the processes that go on in buildings like this. I’m a roughneck.” The media ate it up.

But Kathleen raised concerns on her Facebook page. She saw his performance as clownish and not conducive to winning converts in government. Smith also noticed “Bernard’s” story contained several holes; she asked questions about where he was really from, his financial situation, how long he actually worked in the oil patch, and who was funding his travels to Ottawa.

Because it turns out, said roughneck’s full name is Neal Bernard Hancock, who is “a graduate of Quebec’s English-language Bishop’s University, from which he has a degree in media and communications.” Smith was one of the first to start questioning the various contradictions in Hancock’s narrative as well as his approach to lobbying, and her comments resulted in a vomiting of electronic bile.

On the advice of counsel, Kathleen has not published the screen caps of the threats she’s received, with one exception, which she refers to as “one of the least vile.” 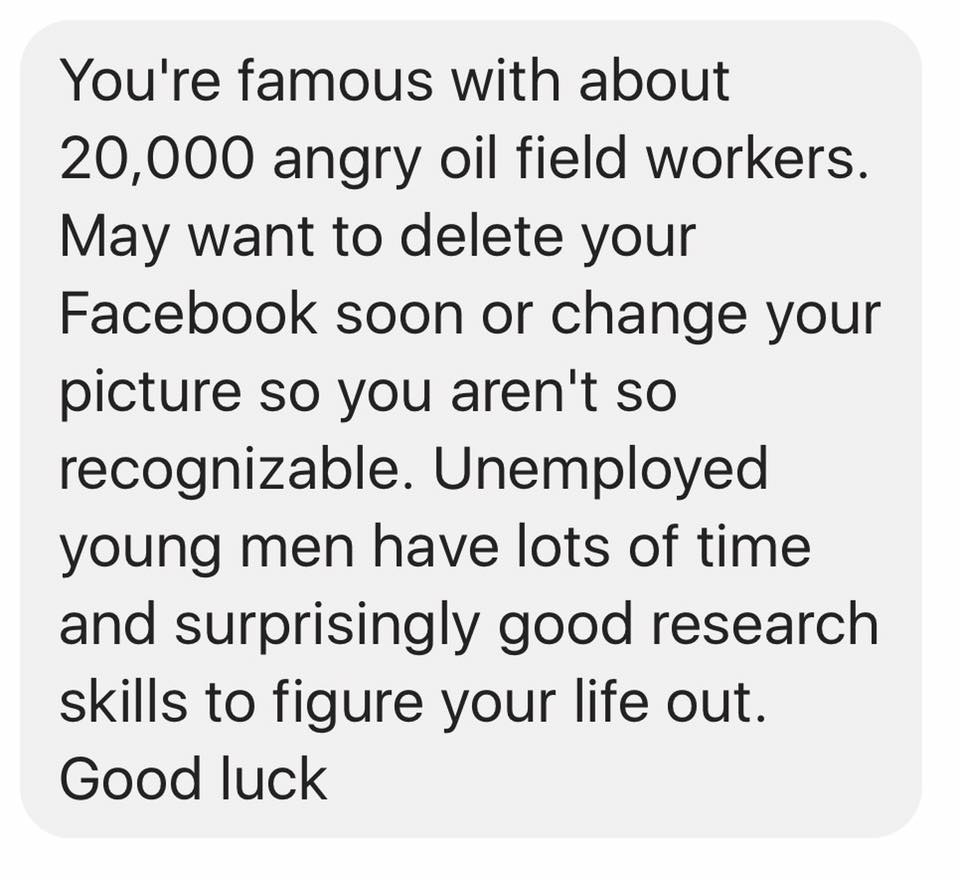 Such attacks are nothing new for Smith. An early adopter, she’s been online almost two decades and says, “It’s far worse now. In the beginning there was still some sense of decency. But over the last two decades everything has become so polarized; the attacks are meant to destroy and terrorize.”

Any time she posts something that gets reach the attacks invariably happen. “There will be a fake account made that is insulting,” she said. Her Twitter is @KikkiPlanet and she told me about one fake account made called @KikkiCunt that tweeted an endless stream of porn. “There will be death threats and rape threats against me and my daughter. There are constantly attacks on me as a mother. I’ve had people say ‘Maybe if you got your bitch ass offline your kid wouldn’t have killed himself.’” This in reference to Smith using social media to confront her heartbreak over her son’s suicide, which received national media attention. If you are a mother, they will attack where it hurts most. This kind of thing doesn’t happen to fathers.

When she raises these issues of gender-based attacks she is told, “Stop hiding behind your vagina.”

This is in reference to a Facebook post Molly Galbraith made on January 1 of this year. It wasn’t so much the photo, but what she had to say about that photo that prompted so much sexist ire. 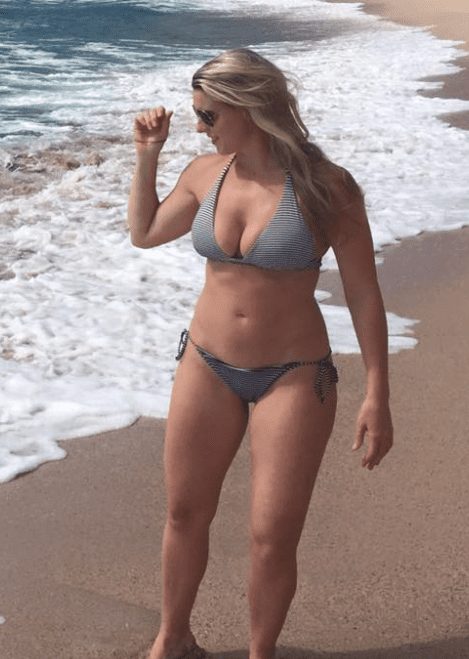 The caption Molly wrote to accompany the photo began with: “This is my body. This not a before picture. This is not an after picture … it’s a LIFE picture.” Galbraith explained to me, “The caption talked about my relationship with my body over the last 12 years. I discussed my experiences with figure competitions, powerlifting, my Hashimoto’s and PCOS diagnoses, the subsequent weight fluctuations I experienced. I also talked about how my body has been ‘publicly evaluated, judged, and criticized, and those judgments have been used to determine my level of skill as a coach and a trainer, and my worth as a person.’” The photo went viral and then, Molly describes, it became “INTERNATIONAL NEWS THAT A WOMAN LIKES HER BODY.”

The initial response was positive, but as exposure to the post grew, in came the negative comments, such as the ones about being “fat, ugly, disgusting …” At the other end, there were people who said, “I couldn’t possibly have experienced body image issues and so I was disingenuous, greedy, and an attention whore. Because you know, the world likes to police how women feel about themselves. And of course, I received all of the nasty, crude comments from men about what they’d like to do to me; judgment regarding how ‘fuckable’ I am.”

YVETTE D’ENTREMONT – THE SCIBABE
“There is latent misogyny from women almost as much as men,” Yvette told me. “As much as we say we support each other we’re almost as likely to attack other women for our looks and how we present ourselves. There is a lot of tone trolling.”

Yvette first exploded onto the science communicator scene in the spring of 2015 with an internationally viral post for Gawker entitled “The Food Babe Blogger is Full of Shit.” Possessing a master’s degree in chemistry, since then Yvette has grown a massive reach through social media. But she’s also faced ample criticism.

“I was told I couldn’t be a real scientist because I swear and I wear a mini skirt,” d’Entremont said. “They don’t troll guys for what they wear. A man can wear whatever he wants when he does science.” She also explained that it’s more other women who complain about her persona, which is counter-intuitive. “We’ve been told we’re supposed to look and act a certain way for so long that when someone breaks the mold it throws women for a loop,” which she says is anti-feminist. “Part of feminism is saying I can woman the way I want to woman.”

d’Entremont told me she’s hesitant to even mention feminism on social media because of the misguided backlash the word often generates.

She’s been insulted for her looks and told not to sell science using “salaciousness.” Someone also threatened to cut off her head and throw it in the ocean. “These aren’t things men ever have to worry about,” she said. “If I were a man doing this I wouldn’t have to think about it.”

LEIGH PEELE – FAT LOSS EXPERT
“Internalized misogyny is a living, breathing thing,” Leigh Peele says of how women often treat other women. “I wrote a piece once about the scientific facts (or lack thereof) behind the Paleolithic diet. During this time, I was a very lone voice in a crowd that was all on board the Paleo train.” The article was a hit, then the attacks began. One woman wrote: “I’m waiting until one of the men in the field cover this. Sorry, but men relate more to primal diets and can better understand research.”

Peele also says that, “The majority of my ‘Oh, here let me explain that to you’ comments are from men,” because they can’t accept that she’s a respected expert in her field and knows what she’s talking about.

There was also an incident years ago when Leigh wrote a scathing review of Jillian Michaels’s Master Your Metabolism book for its lack of scientific rigor. And while Peele made her argument against Michaels science-based, in turn she was attacked for her looks. “They wanted to see what my abs looked like,” she said. “They didn’t care or address at all the science claims I made … they wanted to show I wasn’t in shape.”

JENNIFER CAMPBELL – MAMA LION STRONG
“He messaged me and told me he was going to ruin my life.”

What prompted such rage? A Facebook post about the impact of sexualized advertising on children. Specifically, it was about a plethora of huge Victoria’s Secret posters in a public mall. Campbell called out impossible beauty standards and the effect on young minds who could not help but see these posters. The commentary went viral and garnered mass media attention. Then, outrage. 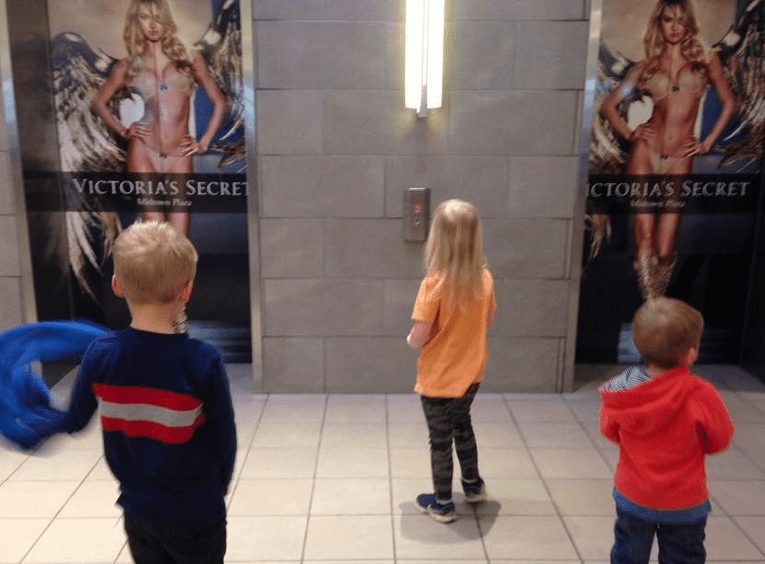 The man with the desire to ruin Campbell’s life stalked her online searching for any photo where Jennifer showed skin so he could proclaim her a hypocrite. “He took screenshots of any photo he could find of me in a bikini and started posting them in the comments of my body image-related Facebook posts.” The man also told her that he had contacted local media to see if he could get them to write an exposé of Campbell.

The real fear began for Campbell when she began to do some investigating of her own and discovered the man lived in a nearby city. It got to the point where she became fearful when out walking alone.

It wasn’t just that one man, but the media spin on her story was often negative: how dare she call out sexualization of women’s bodies? “I was on a conservative radio talk show about this and people called in and said awful things,” she said. “Any time the media ran a story on it they ran it in a way to stir controversy.”

Her Facebook page became inundated with hate, and Campbell’s sister had to temporarily take over the page, deleting and blocking those who only came to heap anti-woman scorn upon Jennifer.

The attacks took a toll. “I was totally depressed, deflated, paranoid, self-conscious.” Then something changed. “One thing that helped me get over what happened was seeing Hillary Clinton speak in Saskatoon shortly after. I thought, That’s where I’m going to get the strength to keep on going. I have just experienced 0.000001% of what she has in her lifetime for being a woman. If she can keep standing, so can I.