The Buttered Coffee Guy Has Gone Off the Fucking Deep End 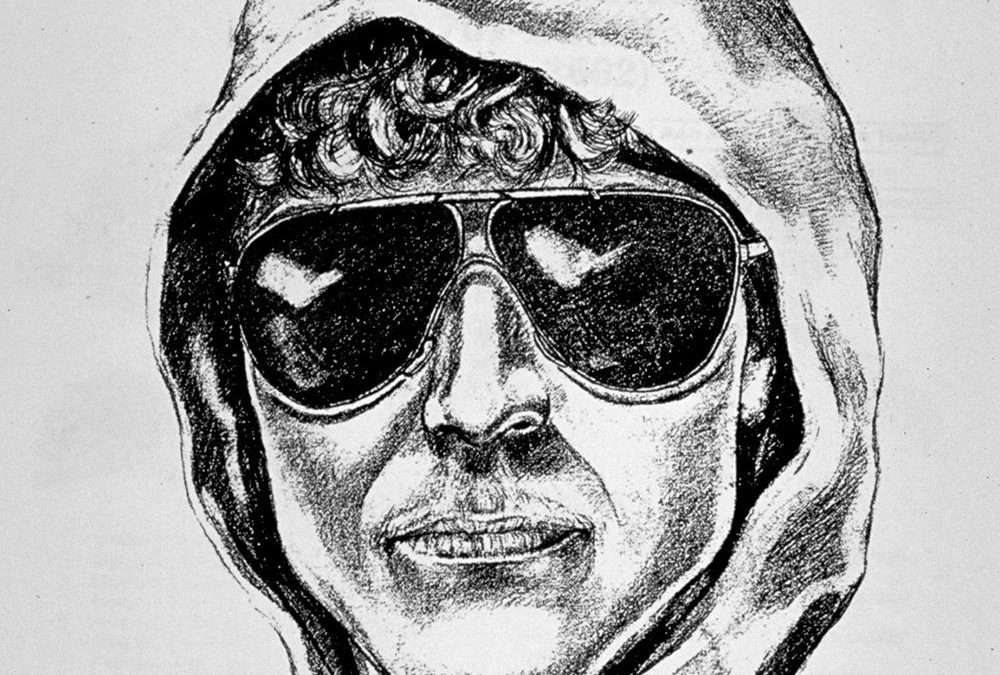 Looking pretty suspicious on the flight to San Jose…but I’m blocking junk light so I have more energy when I land.

Noise cancelling headphones so my brain doesn’t waste energy filtering out airplane noise, TrueDark Daywalker glasses to cut the LED lighting that harms mitochondria, and the hoodie to block the glare from an open window on my left.

Your brain gets tired when one eye gets very bright light from your peripheral vision and dim light from the other eye.

I took an Unfair Advantage ampule and 3 Ketoprime supplements before takeoff to keep my mitochondria at full power in the low oxygen high EMF environment of the plane.

And of course Bulletproof Coffee with Brain Octane for ketones, which also help.

Try these tricks…flying sucks a lot less when you block the stuff that makes you weak and do what it takes to stay at full power.

Most of this stuff is in Head Strong – worth your time to read!

“Pretty suspicious?” You look like the goddamn Unabomber. Good thing you’re a pasty white guy, or the Department of 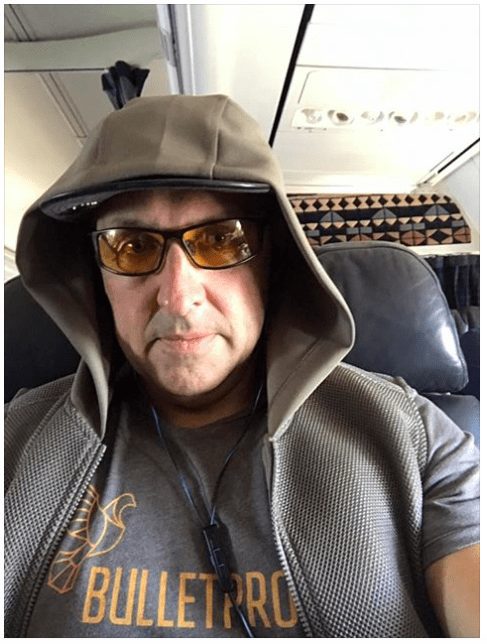 Homeland Acts of Patriotism would have rubber-gloved every orifice on your bullet-ridden corpse for having dared walk into an airport in that getup.

Oh, the irony of so many holes being punched through your “bulletproof” T-shirt.

As for the commentary included with the photo … sweet chocolate Christ on rubber crutches … what in the fucking fuck? It’s just derp upon derp upon derp. O’er the land, this post generates all the can’t for all the evens.

At first, I didn’t even understand what you wrote, so I added “bruh” every third word, and “dude” every fifth word; then it makes perfect sense. It’s midichlorians, right? You’re talking about that stuff from The Phantom Menace that’s give the Jedi their power, yes? The storyline we now pretend never happened?

Surely you didn’t just learn some science words then randomly throw them together.

I mean, sure, noise cancelling headphones can be useful on a plane. Sleep masks can be good too. But “junk light”? Dafuq is that? Is it in the same realm as junk science? 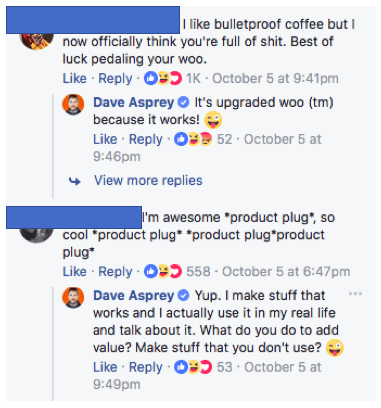 Man, it’s gotta sting having a comment from a fan of your overpriced, bullshit coffee publicly dis you on your own page and get a thousand likes for it. Seems as though this customer of yours believes you’ve strapped a couple of hydrodynamic boards to your feet and launched yourself overtop a carnivorous fish.

Was it the TrueDark™ Daywalker grandma glasses where he thought you went too far? They’re available on “biohacked.com.” I looked at the About page, and that sure looks like you at the top of the page, wearing some kind of maxipad on your forehead. (Does the maxipad also prevent harm to mitochondria?)

Yes, there is research showing excessive blue light can damage mitochondria, and blue light blocking sunglasses may help prevent that. But Harvard Medical School only suggests blue light blocking glasses for people who work night shifts or using electronic screens a lot at night. Even then, they wrote “consider wearing.” They’re not all that apocalyptic over the health risks for diurnal folks. How much of a snowflake are you that you need these “Daywalker” grandma glasses?

And the thing about the hoodie because having one eye in brightness and the other eye not makes your brain tired … how tired was your brain when you thought that one up? What happens when you, I don’t know, walk outside heading west or east, and the sun is in the south? Do you turn around and walk backwards for half of it to even things out?

Adding to the pseudoscience diarrhea is promotion of Ketoprime supplements (now on sale on your site for only $53.96 a bottle!) because apparently you can’t handle an airplane that’s pressurized the oxygen level at an equivalent of 6,000 feet elevation. You must scarf those things like Skittles when visiting Colorado.

And your EMF comment? Is it the higher rate of skin cancer among flight crews that has your knickers in a twist? First off, the rate is only doubled for people who fly for a living. What’s more, they can’t say for certain if it’s the flying doing it, or possibly something else. And just how much time do you spend flying anyway? Even if it’s a lot, where’s the evidence that “Ketoprime” is going to do the square root of fuck all to help? When it comes to cancer, ketogenic diets aren’t shown to do much of anything, despite all the hype, so I am most skeptical as to whether some overpriced supplement does anything either.

Oh, and you had to get in the plug for slurping the butter coffee. Hey, remember that time you did that video of you eating a stick of butter, saying it was like eating a Snicker’s bar? Remember that awesome expression on your face? Whatever happened to that video?

And just in the last week on your Facebook page you have:

And that’s just in the last week. There was also that time you recommended people inject urine into their bodies in order to treat allergies. Yes. Urine. Injected. Fucking hell.

Don’t even get me started on how poop-filled the entire concept of “biohacking” is in the first place. Want to live well, healthy and long? The formula is pretty simple: Start with good genetics, practice good sleep hygiene (no fancy glasses required), avoid too much sun exposure, don’t smoke, keep alcohol intake light, eat a healthy, calorie-controlled diet (which does NOT include copious amounts of butter), and exercise regularly (a combination of aerobic and resistance training is best).

There. I just biohacked all that hypochondria. You’re welcome.

Author’s Note: I had creative help in writing this piece. In my Facebook sharing of Dave’s Unabomber photo the followers of my page unleashed much hilarity in the comment field. Some of those comments have been integrated into this piece.