The Body for Wife Story 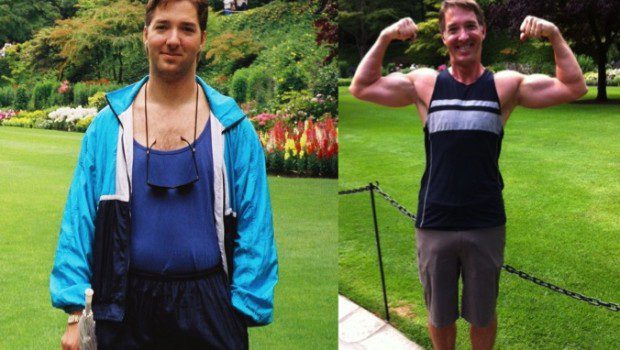 “Body for Life” by Bill Phillips is one of the bestselling weight loss / get in shape books of all time, and it still runs an annual 12-week transformation challenge on their website, bodyforlife.com. The book really popularized the amazing before and after photo phenomenon, which I’ve replicated with the feature photo above. Body for Life sold millions of copies and further boosted EAS as a supplements juggernaut. (The book recommended a high intake of EAS supplements at a cost of around $300-$500 per month – people have referred to the book as a glorified brochure for EAS).

Anyway, this is the story of how I chose Body for Wife as my website URL.

From 2001-2004 I was working out with a group of three guys from work at lunch each day. They were doing the Body for Life program, plus taking all the supplements, and I was just doing my own thing and taking zero supplements. I sometimes made fun of how obsessive they were about sticking to the parameters of the program and the supplement regimen.

One day in the locker room, my chest all pumped from bench press, one of the guys mentioned, “Jesus, James. You don’t take any supplements or anything. What’s your secret?” My reply came to me: “I’m on the body for wife program.”

“Ha!” Stephan said. “You should write that book. I would buy that book.”

And a light went off.

I bought the URL that day and parked it, thinking one day I would write that book. There was truth in the name, as I had gotten in shape back in 1993, after seeing a photo from our summer vacation (the one on the left). I wanted to propose to the love of my life and figured getting in shape first might be a good idea. To this day, I still get some of my motivation from that desire to be pleasing to her eyes. The majority of my drive is because I actually learned to like exercise though. I don’t advocate wanting to look good for someone else as a primary motivator for fitness.

So Body for Wife started as a play on words of Body for Life, and early on in my writing career I wrote a number of articles debunking the myths regarding metabolism that were perpetuated by the latter, like this one for the LA Times about muscle mass being an awesome fat burner, and this one about high intensity interval training being the holy grail of fat loss.

It’s worth noting that I never thought Bill was a bad guy. He got a lot of the metabolism details wrong, and he pushed his supplement brand (he sold the company a while later), but he sought to inspire people to get fit and extolled the virtues of both weightlifting and aerobic training. I always figured we had a lot more in common than not.

I actually started writing that book my friend suggested, calling it Body for Wife: The Family Guy’s Guide to Getting in Shape, but after a few agents told me that most middle-aged men don’t give a shit about getting in shape I changed tack. Instead I started writing from a more gender-neutral perspective, and the whole “body for wife” thing just became a personal brand, because some people thought it was funny. I’m just that guy who writes words and likes it when his wife gropes his biceps.

On the book front, it all changed when Margaret Leitch sent me some fan mail. She has a PhD in the psychology of eating behavior, and after some back and forth emails we decided to write a book together, which I think is probably the best popular source of information on appetite control you can find. I say that because we didn’t approach it with the goal of writing the second-best book on the subject.

Anyway, that’s where it came from. Although my writing has evolved beyond health and fitness, I keep the URL because it’s still part of who I am, and it shows up well on search engines.