That Time an Inspirational Quote Actually Changed My Life 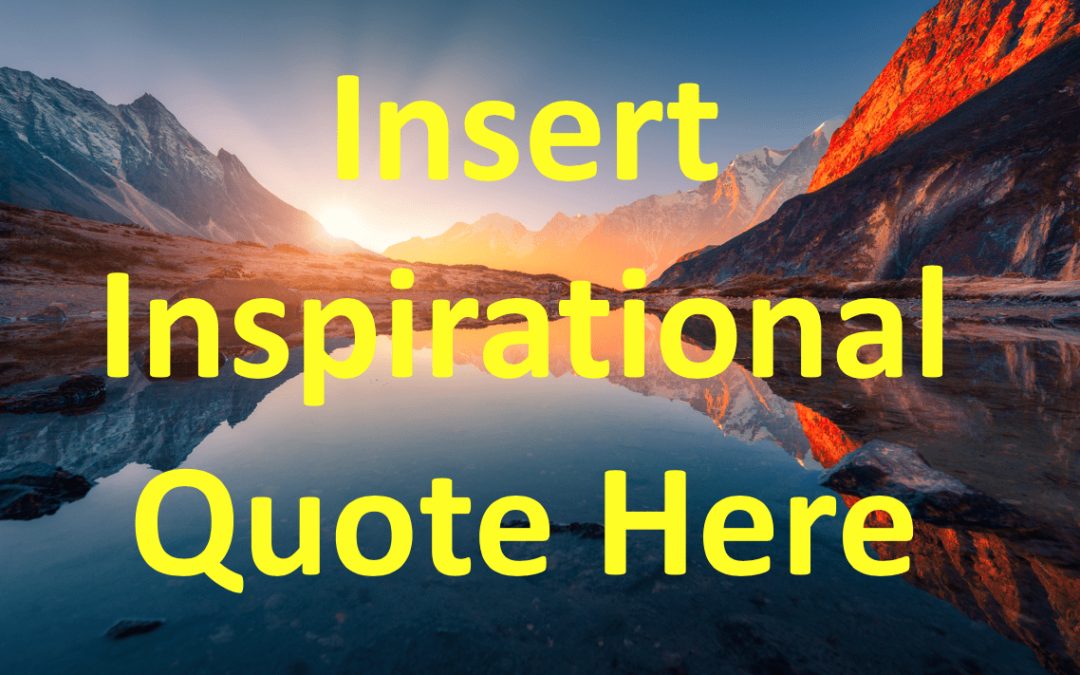 Whoever said “Nothing tastes as good as skinny feels” obviously never had crème brûlée.

I wrote a piece a while back titled “Stupid Fitness Sayings that Need to Die”. The aforementioned is one such saying we’d be better off without.

I worked in an office environment in a time of the motivational poster and was delightfully amused when a creative company started selling demotivational posters mocking the former. Many find the parodies more amusing than they see the originals as inspiring.

That quote—the original by Shedd—opens the third chapter of my new book The Holy Sh!t Moment: How Lasting Change Can Happen in an Instant.

There are many such inspirational quotes peppered throughout my book. Side note: Do you know how hard it is to find sayings from people who aren’t white guys in a book of quotations? It’s not that others never had anything meaningful to say, but because it was the white dudes who most often had their words committed to the historical record. I’ve heard tell that when you see a quote by “Anonymous,” it’s likely it was said by someone not a white male. Rather than give due credit, they were made invisible.

Nevertheless, I endeavored to include diversity in the quotes I chose. Chapter 1 opens with “There are opportunities even in the most difficult moments.” That’s by Nobel Peace Prize winner Wangari Maathai.

I know it’s fun to deride the motivational poster. If inspirational sayings were all it took to give people a motivational boost, we’d all be super fit, successful, driven, wonderful people.

But sometimes, the quotes do work. I say this, because a motivational quote changed my life.

I first wrote about the experience a few years ago for this Chicago Tribune article. I elaborated in chapter 1 of the new book:

I wasn’t just a bad athlete growing up, but a bad student. I was smart but lazy. I squeaked my way into an easy postsecondary program with half a percentage point to spare, then promptly began failing. I went to the campus pub instead of class. The credit-card companies were calling. Things were bad and looking worse; I was about to be kicked out of school because of my poor grades.

I was in a hole of my own digging; Joan Baez pulled me out.

The folk singer’s words appeared in the school newspaper, and my life changed in a moment.

“Action is the antidote to despair,” the quote read.

I’m glad the word “despair” was used and not “depression.” When someone is in a state of depression, they may feel both psychologically and physically incapable of taking any action. But as I wrote, this was a hole of my digging; it was despair over my self-created situation. Action was the key to overcoming it. In a moment, I realized that I’d been chronically lazy to the point of putting effort into indolence. With a sudden flash of understanding, I saw that all my problems were solvable via doing some actual work. Suddenly, there was light at the end of the tunnel.

In a flash, I felt so much better. In psychological terminology, what I experienced is called “dramatic relief.” The problems are still there, still weighty. But when the firm commitment is made to overcome those problems via concerted effort, they no longer feel so burdensome. Like I wrote: light at the end of the tunnel. After a period of darkness, when you can suddenly see it, you become driven to race toward it.

My book is about the science of the life-changing epiphany, because that’s what happened to me. In a moment, my life switched tracks. The Joan Baez quote was the trigger. And while what she said was profound and important, it’s not going to work for everyone.

There was a good chance it might not have worked for me, had the timing been different.

I spoke with Kennon Sheldon, a professor of psychology at the University of Missouri and an expert in the behavior change model called Self-Determination Theory. He explained to me that, when it comes to having something like a motivational quote change your life, it’s about it hitting you at the right time.

“Most people reading that Joan Baez quote wouldn’t have gotten as much out of it as you did,” he said. A week earlier or a week later it might not have had any effect on me either, he added. “You were at a moment that was just right.”

Sarah was at the right moment.

I write about her in chapter 9. In January 2017 I wrote a piece about how a bit of advice I gave my doctor (how is that for backward?) had a profound effect on him and changed his life. Sarah read that piece, and later reached out to tell me of how it prompted her get off the couch and begin training for her first 5K run. Ten months later, she was training for her first half marathon. I believe she’s gone on to do a full marathon now.

I’ve lost count of how many people have messaged me to tell me that a single article of mine changed their life. But I can’t take that much credit. My words just happened to be in front of them when the time was right. They were ready to be nudged over the precipice of massive realization that awakens their spirit in a moment.

(I believe I’ve received most “This article changed my life!” messages for this piece. It opens in a new window if you’d like to save for later.)

How does one create such a moment? Well, I wrote an entire book about it. But I’ll endeavor to give you an executive summary. A good place to start is by changing your understanding of what drives us. As I wrote in this piece, it’s not about a continual exertion of willpower or having “grit,” but rather how our identity and values create passionate adherence to a certain path because we want to follow it.

Here is a collection of stories I put together from people who have experienced such a life-changing moment, if that provides any additional insight. I also have two guest posts from people who were beta readers of the first draft of The Holy Sh!t Moment who said reading the book triggered a life-changing epiphany. Here is Carrie’s story, and here is Martha’s story.

The thing is, we never really know what it is that’s going to wake us up, help us find our True North, set us on a new and better path in an instant. It requires some preparation, some searching, and openness to new experience. You need to engage in self-reflection, analyzing who you are, where you’ve been, and where you think you could be going. You need to begin asking the questions: What could I do with the rest of my life if motivation was no longer a scarce resource? If I was suddenly inspired to strive, what could I realistically accomplish?

I want to close with an important message about what happens after the holy-sh!t moment, because this has come up in a number of interviews I’ve done for the book.

Interviewers have said, “Well I had this epiphany and then nothing happened after. It felt like this sudden awakening, but then I just went back to the same old.”

It would be both easy and glib to say, “Well then it wasn’t a true epiphany.” But that’s a dismissal lacking in thoughtfulness and respect for what someone experienced. There is some truth to it in that, the research shows, the “true” epiphany is overwhelming in its power to motivate people. It would be painful to not follow this new calling, because you come to feel as though you must. But just like there need be nudging on the front end to make it happen, steps need to quickly be taken afterward to “set the hook,” so to speak.

A book I drew on heavily in my research is Thinking, Fast and Slow by Nobel prize winner Daniel Kahneman. In it, he examines “System 1” as the fast, unconscious way of thinking, explaining that this is where sudden flashes of insights—epiphanies—come from. They are deeply emotional and powerful; they have the ability to leave a lasting impression on us. But once insight arrives, the brain suddenly switches track to the slower, methodical, rational System 2.

This is about enacting the vision that you suddenly received. It is about leaping into the planning process to make it happen.

That’s what I did, and why the Joan Baez quote had the power to change my life. I didn’t just go, “Oh, cool. Now I’m different. Go me.” I took immediate action. How? Well, in my state of despair I had planned to once again go to the campus pub and add more debt to my credit card with a few barley-based beverages. But after my sudden realization I knew I had to do something else. Awash in happy hormones, I went straight to the Registrar’s Office and booked an appeal to beg my way out of my failing report card. Having done that, I began to plan how to convince them to let me stay on as a student.

They went for it, and after that I was most studious, eventually attaining two master’s degrees.

It has to do with dopamine. As I explained in this piece, dopamine is critical to goal attainment because it recognizes progress. Every little step you take toward fulfilling this new mission is neurochemically rewarding. It will keep you on the path through toil and adversity for months and years because it’s letting you know you’re getting closer to your objective. That booking of an appeal was a little hit of dopamine for me. Planning what I’d say to the committee was more dopamine. Attending the appeal: dopamine hit (while also being scary as hell). Getting the good news I could stay on as a student: bigger hit of dopamine. And so on.

Where does the inspirational quote fit in? It can possibly be a small part of the puzzle. Or it can be something else. The whole concept of having a sudden realization awaken you is far from simple. Sometimes it strikes out of nowhere, completely unbidden. But there was a lot happening behind the scenes leading up to it, as well as following it, that leads to a lasting transformation.

What I’m saying is, it’s okay to poke fun at these things, because I love a good laugh, and those demotivational posters are a hoot. At the same time, it’s okay to use the quotes that are intended to inspire as a trigger to set you on a new path.

If you want to learn more about how it all works, be sure to get that new book of mine.