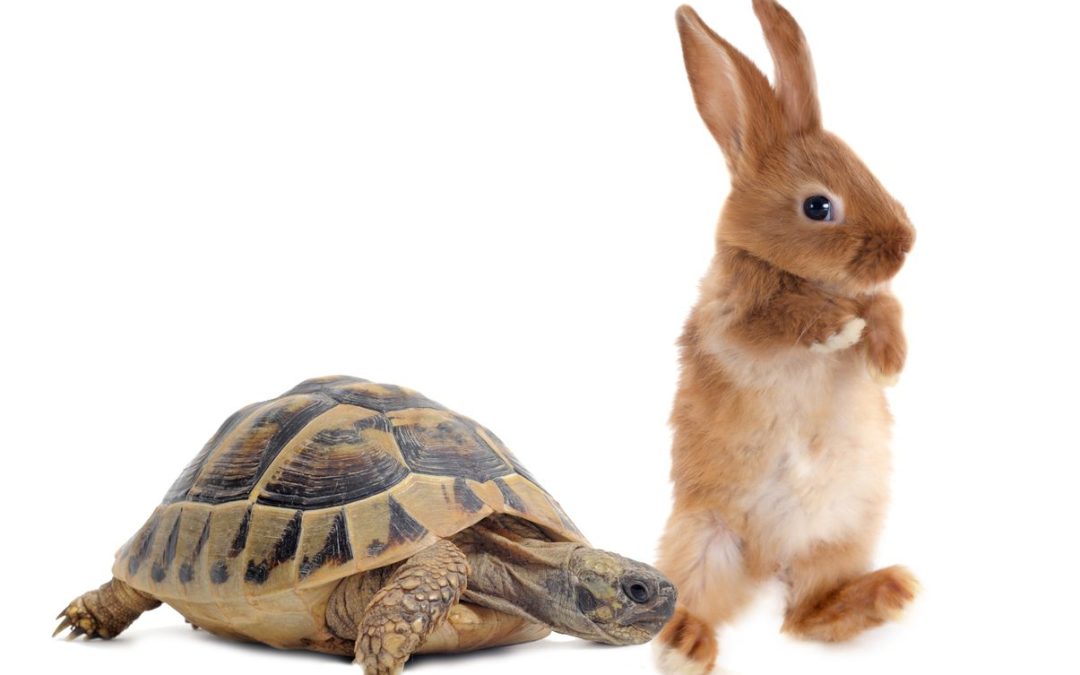 Baby steps will get you there, unless you’re frustrated with the slow pace of change and give up, in which case, screw baby steps, because strong and steady can win the race.

Regarding weight loss, I used to always preach the tortoise over the hare approach, saying that the hare sprints fast out of the gate, gets 50 yards and says, “Fuck it. Too hard. I quit.” Instead, I would say, be a tortoise. Go slow, because slow progress is still progress.

Alas, life is not always so black and white where fast weight loss = bad, and slow weight loss = good. Sometimes, there is a reason to go fast.

We have to of course place some limits on what is “fast,” as you don’t want to end up like one of those Biggest Loser basket cases. There is fast, and then there is the epically stupid approach to weight loss; “TV show weight loss” almost always qualifies as the latter.

The drawback is that results are slow. Sometimes, they’re so slow you can’t see that any changes are happening. Sure, you can focus on the fact that you now exercise one hour per week whereas before you were exercising zero hours. Or you can gain comfort in knowing you’re averaging three servings of fruits and vegetables a day whereas before you were lucky if you ate one. You may have cut your booze intake by 20% or started preparing one more dinner each week instead of eating out. These are all meaningful, but sometimes you want more than that. Sometimes, you want that belly to be smaller and those pants to be looser and those muscles to be bigger and stronger and you want to go further and faster. And you’re tired of waiting.

Sometimes, you’re in the mindset to push it. And there is scientific support for such an approach.

First off, let’s look at some data from the National Weight Control Registry (NWCR), which is research study that includes thousands of people who have lost at least 30 lbs and kept it off for a year or more. A 2014 study of the NWCR data published in the American Journal of Preventative Medicine found that larger initial weight losses were associated with better long-term outcomes. The people that lost a good amount of weight on the front end were more successful long term.

When looking at dieting alone, a 2014 study published in the British Medical Journal looked at weight loss maintenance in 204 adults with obesity, comparing long-term success of gradual weight loss vs. a very low calorie (crash) diet approach and found that maintenance vs. regain numbers were about the same, regardless of rapidity of loss. This is in line with a 2016 study of 57 participants published in Obesity that found fast weight loss had about the same regain / maintenance rate as the more tortoise-like method.

It’s important to note that the weight loss in these two studies was achieved only via dietary restriction. There are no mentions of exercise interventions. And that’s an important distinction because the NWCR found that 94% of successful weight losers increased physical activity to do so, and there are myriad weight loss benefits to exercise that go beyond calorie burning. Add to this a 2004 3-year cohort study published in Nature of 1,247 people looking to develop “lean habits” that determined that people who were more successful changed more than one thing. In other words, when you engage in more of a lifestyle overhaul that goes beyond just diet, you’re more likely to stick with it long term.

There is also the fact that starvation sucks.

Those very low calorie diets in the above-mentioned studies were at caloric deprivation levels that would have me ready to dropkick a kitten into a wood chipper. But because I like to exercise, I can still create big caloric deficits while taking in a not starvation level of food.

And that’s where I get into the stuff about how strong and steady can win this race.

Because sometimes, you’re in the zone, and holding back would be a mistake. We’re still nowhere near epically stupid Biggest Loser style weight loss, but there can be periods in your weight loss journey when you’re focused and intent, and you want to exercise more. You want to go faster and further and more frequently and for longer periods of time. Add to this that you want to be more careful with your calories and make that fat fly off. You feel capable and determined and it is not suffering, but rather the hard work is actually enjoyable.

It’s important to keep yourself mentally and physically in check. Don’t push your exercise to injury levels, and realize that if you over exhaust yourself you may become too tired to make wise food choices. You also don’t want to start ignoring loved ones or your social life, and be wary of getting on a path that can lead to developing disordered eating behaviors. Obsessing over eating only “clean” foods is not a path to long-term success.

Being in the zone isn’t about punishment or deprivation, but about feeling energized from pushing it. Add to this the fact that dramatic results can be attained relatively quickly, and it helps keep you going because you’re in a positive feedback loop of knowing that what you’re doing is working well. So you want to keep working at it.

You can’t be in that zone all the time, because life gets in the way, and you may backslide a pound or two here and there, so don’t fret over this, but expect that there is an ebb and flow. As long as you don’t go totally off the rails it’s okay to listen to what body, heart and mind are telling you and, when they are all telling you “enough of this tortoise bullshit,” you can transform into a powerful hare that can stay strong and fast for a long race.