Penis Size is a Weak Insult 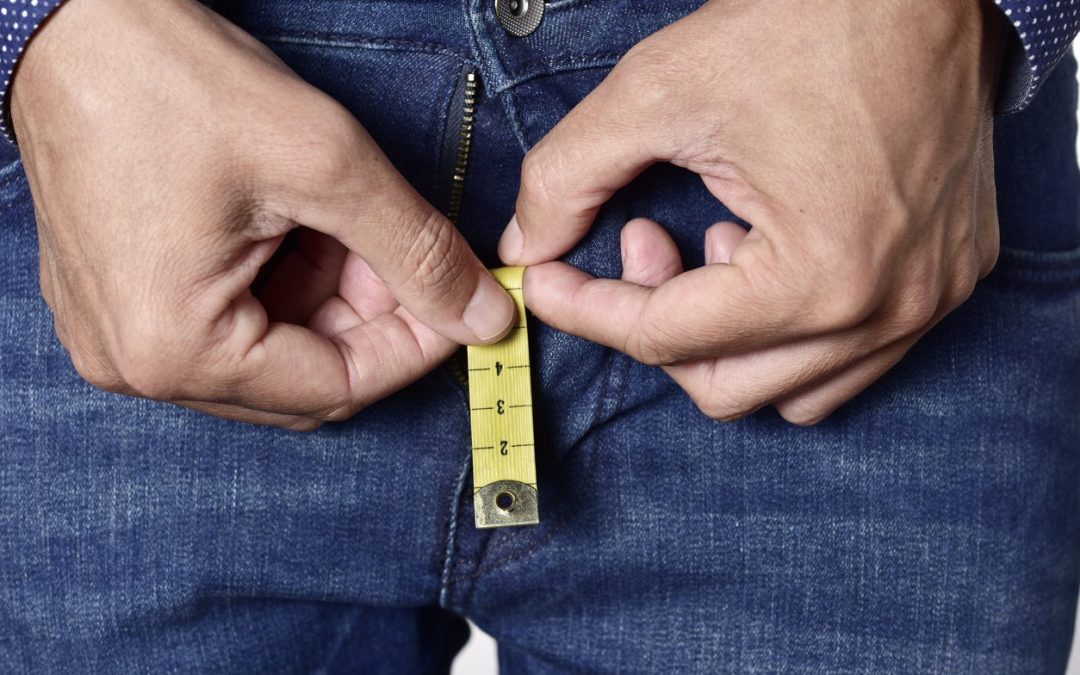 A guy in a jacked-up truck with tires the size of Trump’s ego, powered by a planet-killing engine blasting black smoke, tears through your neighborhood. The engine roars like the world is coming to an end and makes the windows on your house rattle. He’s doing double the speed limit and children flee for their lives in terror.

Def compensating for something.

But what? What is it that he’s compensating for? Poor education? Not enough hugs from dad? Having the personality of a wank sock? Penis size?

I submit to you the possibility that such a douche bucket might have larger than average penis. In fact, I struggle to make the connection that the size of his phallus would have anything to do with being a menace on wheels. I doubt it has much to do with being a misogynist or an internet troll either.

I have made the penis size insult. I have referred to people as needle-dick bug fuckers. A couple of years back I shared an article on my Facebook page that referenced penis size. I cannot quite recall what the premise was. I believe it had something to do with how to be good in bed when you have a small penis.

Anyway, I wrote a comment on the sharing that said something to the effect of, “Next time you encounter a men’s rights activist, feel free to share this article with them.”

And it’s wrong to do so. I was wrong, and so I ended up deleting that post. It’s just another form of body shaming, which I don’t support. Men have no more control over the size of their junk than they do eye color or height or race. Further, I cannot fathom a scientific method of equating penis size to behavior. I’m sure there are plenty of men with giant dicks who are giant dicks, and vice versa.

About MRAs, there are plenty of behaviors they engage in that are worthy of scorn without having to bring penises into it. Any vitriol hurled at them should be directed at how they act, not what we imagine they’re packing in their underpants. It’s just not relevant, and they have no control over it. Their actions, however, are something that can be controlled.

It’s also worth examining the research on penis size to determine just how close most men are in terms of “small” vs. “big” so we can see just how meaningless size comparisons are.

A comprehensive 2015 study published in the British Journal of Urology International analyzed the results of 17 studies involving 15,521 subjects. There were some strict criteria utilized to ensure they got accurate measurements. For example, excluded from the study were men with “congenital or acquired penile abnormality, previous surgery, complaint of small penis size or erectile dysfunction.” The age ranges were 17-50, and there were specific measurement criteria. For example, no measuring length from the underside, because then guys would take the tape measure and start somewhere on the other side of their asshole. Length was measure from the top, pushing in the fatty tissue to touch the pubic bone. Circumference was measured either at base or midpoint. No cheating by measuring the swelled head.

What were the results? Here are the screen caps, but read below to get the imperial conversion. The average penis length is not 13 inches long. 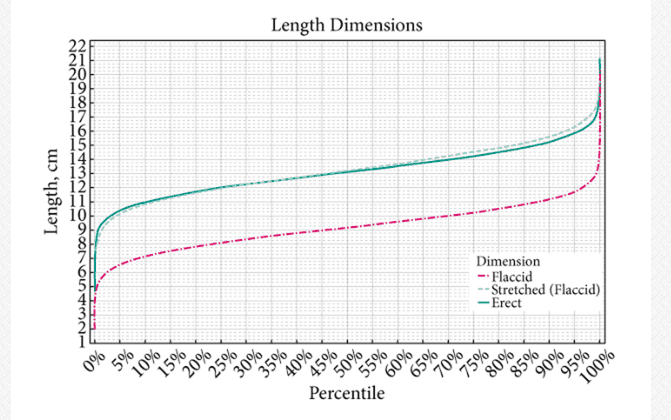 When measured from the top, pushing into the fatty tissue to touch the pubic bone, and measuring all the way to the tip, the average erect penis length is 5.1 inches. But what does it take to be in the 95th percentile for erect length? Only another 1.2 inches. Yes, a man with a 6.3-inch long erect penis is in the top 5%.

What’s more, if he’s an inch shorter than average it puts him in the bottom 5%; a 4.1-inch erect penis is in the 5th percentile.

Looking at girth, which is what I have anecdotally heard is what women care about most, the differences between “big” and “small” are even closer. 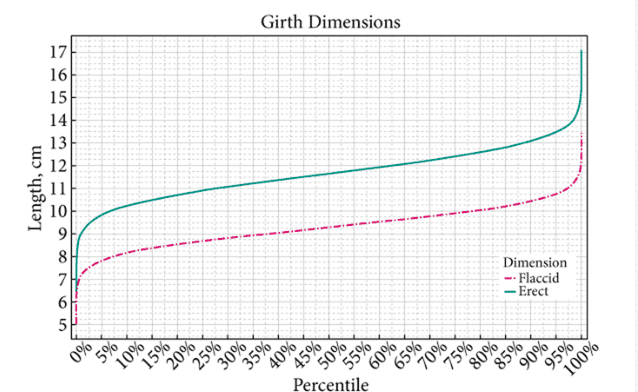 The circumference of the average erect penis, measured at the base or mid-shaft, is 4.6 inches. To hit the 95th percentile for girth a man need only be 0.7 inches larger around (5.3 inches). And to be in the bottom 5% he need be only 0.7 inches smaller in girth (3.9 inches). That’s only 1.4 inches of girth separating bottom 5% from top 5%.

But don’t listen to me. For the heterosexual man, listen to those whose opinions matter. A study published in Psychology of Men & Masculinity surveyed 26,437 women about penis size and determined that 85% were happy with their partner’s size. The study also surveyed 25,594 men and found 45% of them wished they were larger. Obviously, penis size is a much bigger deal to the owner than the recipient.

A lot of this has to do with that toxic masculinity stuff I’ve written about. A guy who doesn’t have a big penis is somehow less of a man.

But that’s a bullshit attitude. Speaking about the ability to find a heterosexual partner, there are a lot of things most women rank much higher than penis size. Things like personality, kindness, having a sense of humor, compatibility, and how he treats and values her. Yes, women often care about looks and physique as well, just the way many men care about such things when looking for a woman. They can care about income too. Or how “masculine” a guy is (in a non-toxic way).

It’s not anything I’ve studied, but I’m willing to bet that none of those internet ads for getting a bigger penis work. And surgery? Most men would cringe at the idea of a scalpel going anywhere near their genitalia. To quote from a WebMD article, it’s not worth it either: “The American Urologic Association states that these procedures have not been shown to be safe or effective for increasing the thickness or length of the penis in an adult.”

I suppose it is possible that some men who fret over the size of their penis will lash out at women, buy ridiculous vehicles, or otherwise behave in ways that make some people think “He’s compensating for something. He must have a small penis.” It’s possible, but I don’t consider it likely. Again, it’s a weak insult because you have no way of knowing, a man has no control over his size, and as the research shows, the differences in size aren’t that significant. Also, most women don’t care that much.

There are a lot of things a man can do in terms of self-improvement to be considered more datable and better in bed that have nothing to do with penis size. And I’ve written about what some of those things are. In the meantime, do your best to keep the jokes and insults about penis size to a minimum. Call people out on their behaviors when appropriate, and come up with some more creative insults for doing so.

Speaking of lacking creativity in their insults, cue the MRA invasion to allege my writing of this article must mean I’m a micro-phallus who is compensating for something.