Muscles and Misogyny: Sexism in the Fitness Industry 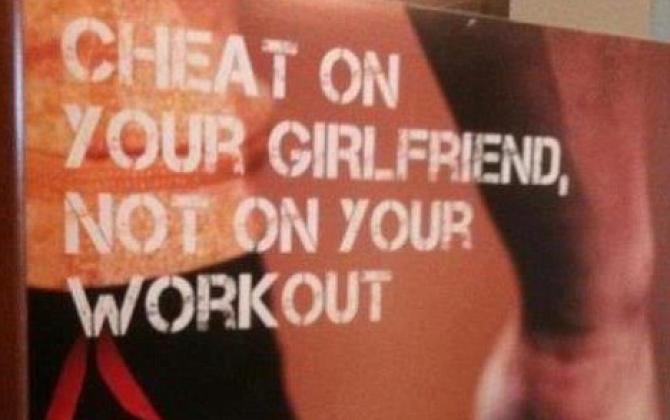 When you have a mom like mine, it’s difficult to grow up to be a sexist piece of shit.

Please note that for the remainder of this article, the word “sexist” will always be followed by the words “piece of shit.” Because accurate. It’s 2017, for fuck’s sake. Grow a brain.

Mom earned the corner office in a male-dominated industry via tenacity, intelligence, creativity, and personality. Growing up, I spent a lot of time hanging around her office doing grunt work, and I witnessed the shit she faced down. Notice that I didn’t say “put up with.”

My older sister didn’t tolerate sexism either. Neither does my wife. I just grew up knowing women are equal. But I never thought too much about sexism until two things happened.

It was almost exactly three years ago. Something was starting to bother me in overhearing my wife’s conference calls. She’s a leader in the medical community and often chaired meetings over the phone. What I noticed is how much harder she had to work to convince some colleagues of a given course. She had to be so well prepared and convincing and relentless to get others onside.

I have an MBA and worked in the business world for years. I’m also white and have a penis. When I was in meetings and wanted to get my way, it was usually easy. “Oh, he’s an MBA grad with a white penis! Better do as he says.” Not those exact words, but the spirit is there. White male privilege is real. (Although if you read the comments on that article, it totally isn’t.)

I noticed the discrepancy for the sexism it is.

The other thing was the Elliot Rodger massacre. There was much talk of his desire to be perceived as an “alpha male” in his pre-attack video. The term, which permeates the fitness industry, always bothered me. And so, fearful of what I might unleash, I wrote a piece titled “The Myth of the Alpha Male.” It was first published on an old domain I no longer am associated with, and it blew up big. The Good Men Project republished it and that led to a gig writing for TIME Magazine about issues of toxic masculinity.

Some people think I write in favor of feminism for clicks, or because most of my readers (70%) are female and I’m just appealing to them. But I also do a lot of writing for a site with the word “men” in the title. I write about this subject because I feel it is right to use my voice this way, and because inequality bothers me, and because the fitness industry is sexist (piece of shit) as fuck.

As I saw with my mom, who was a stockbroker, fitness is certainly not the only industry that is rampant with sexism. But I cannot help but witness the fitness-specific sexism day after day on my Facebook feed. Sexism can even be part of a personal trainer’s brand. They advertise it, more or less, and young men eat it up. I wanted to be a voice to counter that.

Why is this industry so sexist? I have only guesses and personal anecdotes, but I’ll try to relay the issues based on years of careful observation, as well as the continual backlash and being called a “White Knight” I face for writing about it.

Part of the problem with the fitness industry being full of sexist pieces of shit, I believe, are the low barriers to entry. You can be a high school drop out with zero certifications and all you must do to become a personal trainer is say, “I’m a personal trainer.” Works better if you do some juice and lift a bunch of heavy stuff. Maybe use an online macro counter too. It helps to sell training if you have pecs, biceps and abs.

And the internet removes even more barriers. You can be an online “coach” having never stepped foot in a gym. Just steal some photos and pretend to be buff.

Because of these low barriers to entry, and the fact that gym bros exist who have limited career options due to their low intelligence and lack of education, many are drawn to personal training. And there is a correlation between being a dumbfuck and being prejudiced. It’s not just that you’re a sexist piece of shit; if you’re a bigot, you’re more likely to also be a stupid piece of shit.

In 2012, a large-scale study of 15,874 people was published in Psychological Science that asserted “cognitive abilities play a critical, albeit underappreciated, role in prejudice.” Racism, sexism, homophobia … if you got it, you just might be a dumbass.

And as I pointed out, there are a lot of stupid personal trainers out there. What I want to focus on is the sexism aspect. And the reason why is that there seems to be a pretty receptive audience for it.

Permit me a thought experiment.

There are a lot of guys, especially young fellas, looking to get laid. Nothing wrong with that. Even at the age of 48 my brain is at least partially thinking about sex most of the day. Because sex is awesome. But I postulate that the guy who thinks The Answer to being successful with women is all about getting buff is going to have more sexist attitudes than the guy who puts more focus on improving his personality, education, social skills, and achievement. The dude who thinks pecs and abs are what women care most about may be that way because he has a hard time viewing women as little more than tits and ass.

Plenty of young dudes, wanting to get laid, but not getting laid, and therefore lashing out at women. These macho “alpha” trainers speak to them in their language: I can teach you to be a real man. Also, women are stupid and to be objectified and used. No fatties.

Might explain why so many women complain of guys treating the gym like a nightclub on ladies’ night.

Robert Heinlein wrote: “You can sway a thousand men by appealing to their prejudices quicker than you can convince one man by logic.” As a personal trainer, you can be a sexist piece of shit, and some people will follow you. That’s why I think I’m seeing so much of it. Because sexism sells in this industry.

And we let it happen.

I want to cite a specific recent example that also exposes a problem, but I won’t reveal any names because I prefer not to punch down, and this sexist piece of shit is residing at the bottom.

Let’s call this guy Don, because why not?

Don is a sexist piece of shit. He showed up in my feed a couple of years ago because we have more than 400 mutual Facebook friends. I don’t intend to criticize any of the people who are connected to this guy on Facebook. I have the max 5,000 allotment and don’t see a tenth of what any of those people post. Perhaps they haven’t seen how egregious his posts can be. My first impression of him was that he was douchey, and so I avoided, and then I kept seeing again and again just how horribly sexist he is, reaffirming my decision not to connect.

And yet, only a small group of others seemed to care. Even when he partnered with one of the biggest alt-Reich, racist, sexist, rape apologizing, shitbag trolls around today to be the fitness writer for his site, a lot of people ignored it.

But then he plagiarized someone important. That’s what it finally took for large numbers of people to start calling him out. Not the sexism. Not the racism. The plagiarism.

Again, not intending to cast shade on people who are on his friend list. I expect a lot didn’t know, or just haven’t become as attuned to spotting this shit as I have, because I have cast myself into this pit of misogyny. I blame no one for wishing to sidestep it and mind their own business. It’s not pleasant.

I wish to note the fitness industry has some of the finest people you will ever meet. I have met so many awesome trainers because of my job, and I don’t wish to cast a shadow over the industry as a whole, but shed light on the cockroaches in the hope they’ll scurry for cover. This business is full of people who are educated, intelligent, dedicated and decent. If you’re looking for a trainer, and you’re discerning, you can find a great one. You can find one who will change your life for the better.

Back to Don. He plagiarized, got called out, left Facebook for a bit, and came back with a seemingly sincere apology. Some said he was only sorry for being caught (likely), whereas many others promptly forgave.

Because he was caught and called out so vociferously, I expect he’ll not plagiarize again. But he almost certainly will continue with the misogyny, because that’s who he is, and there is no barrier to it. Rather, if you’re targeting a certain group of people, being a sexist piece of shit can be beneficial to one’s brand.

Other than continuing to shed light, I don’t know what else to do to minimize this bullshit.

And for any of you brainless fuckweasels who don’t believe sexism still exists, read this.