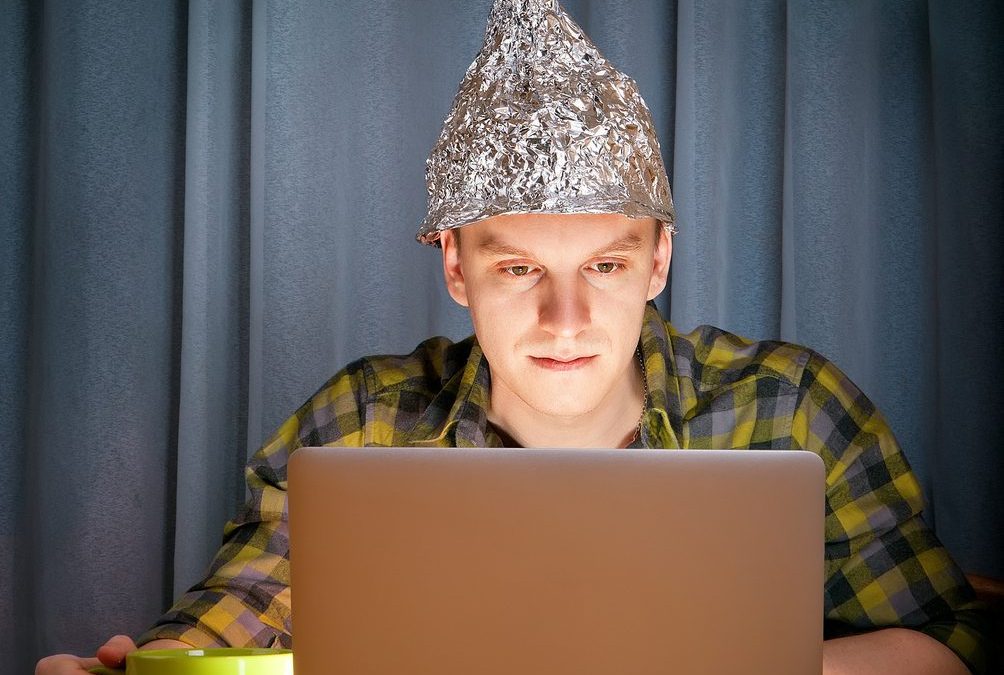 Those damn lizard overlords. Is there no level to which they won’t lower themselves?

And what are they putting in their tinfoil now that the takeover is complete? Chemicals!

“It’s the ultimate in nefarious behavior,” the study proclaimed. “They know tinfoil is the only reliably protective substance to prevent airborne neurotoxins and mind controlling radio waves from entering the synapses of the truly woke.” Big Tinfoil has taken over manufacturing of 99% of the supply, inserting chemicals into the product that both negate its mind-protective properties and cause serious health complications, including seizures, aneurysms, and loss of bowel control.

I sat down with Dave Assspray in his mom’s basement to learn more.

“Look at this place!” he said. “It’s a total disaster. There is shit everywhere!” It was literal excrement to which Dave was referring, as his pants were overflowing with the noxious substance as he launched into another tirade on the internet about the evils of carbohydrates.

“How is it that this new tin foil causes loss of bowel control?” I asked him.

“It interferes with the uptake of brain octane oil,” he told me, “available on my site for only $23.50.” Assspray explained that not only does the oil “amplify energy and mental performance,” but it’s a critical for controlling the parts of the autonomic nervous system relegated to sphincter control.

We had to interrupt our interview as Dave blasted out another stream of projectile posterior filth while berating his mother for only putting three tablespoons of butter in his coffee. When I asked if his butter intake might have something to do with his bowel consistency he accused me of being in the pocket of Big Heart Disease.

Next on my interview list was Peat Moss Evans, who said one of the biggest concerns is that the new tinfoil makes it impossible for people to taste fluoride in their water. “I am just so angry over this,” his said, frothing at the mouth, twitching uncontrollably and flailing his arms. “Do they not understand how toxic fluoride is?”

I asked him how, with this valuable weapon now being tainted, people could avoid fluoride. “Do your research,” he said. “I was visiting a town recently that Mercola.com said had a fluoridated water supply, and I refused to drink any. After a few days I died of dehydration, but it was worth it.” I gave him a skeptical look and he clarified: “I got better.”

Next up was Vain Hair. She was wearing chemical-free organic fair trade leggings and so I asked her about the recent controversy regarding wearing leggings on an airplane. “Who cares about leggings on airplanes?” she said, clutching the sides of her head in obvious agony at all the conspiracies inside battling for control. “The real issue on airplanes is that the air that is pumped in isn’t pure oxygen. It’s mixed with nitrogen, sometimes almost at 50%.” Not to mention the fact that airline food is 100% GMOs and that if you fly too far you’ll go right off the edge of the earth.

Finally, I spoke with Gary Tubesteak about how this travesty affects our ability to tell good calories from bad calories.

“Calories are a myth,” he said. “It’s all about the insulin.”

“But,” I replied, “Doesn’t the first law of thermodyna—“

“Thermodynamics is a myth,” he interrupted.

“Don’t you have a degree in applied physics from Harvard?” I asked.

“Harvard is a myth.”

“So, calories don’t matter to weight loss?” I asked.

How can you stay protected now that the modern tinfoil supply has become corrupted? Fortunately, you can now purchase organic, chemical-free tinfoil for making protective hats. It’s made in a paleo-approved facility where all staff members subsist on a strict diet of free-range, grass-fed unicorns.