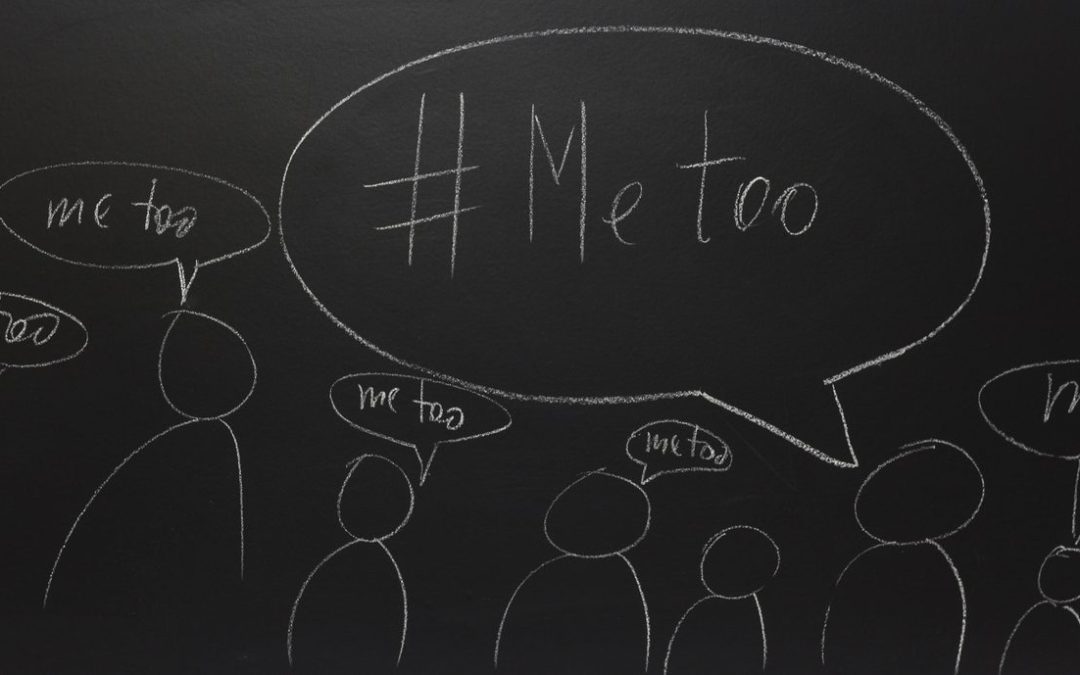 I’m going to try real hard to not fuck this up. Plenty of hurt feelings out there, I don’t wish to add to it.

It began* with a tweet by actor Alyssa Milano: 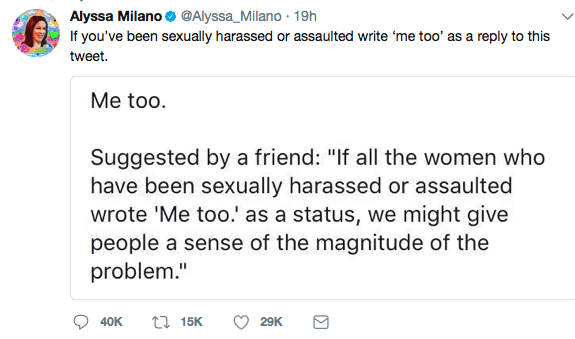 Interestingly, although not at all relevant, I had my interview with her Who’s the Boss? co-star Judith Light published in the Los Angeles Times two days ago. Judith says get your flu shot. Listen to Judith.

Anyway, I saw it show up on Facebook, because I’m far too long-winded for Twitter and barely use it, and it was instantly followed by my feed being filled with many women I know, admire, and cherish posting “Me too” as a status update.

Without any knowledge the internet movement was already going off the rails, I post this to my Facebook page: 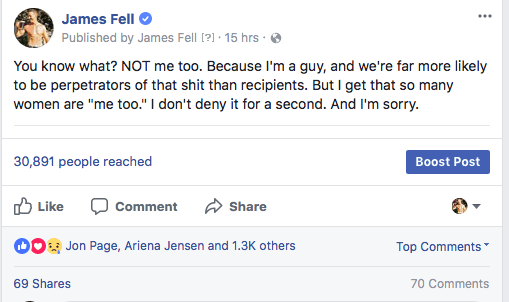 I wasn’t trying to deride male survivors of sexual abuse or sexual harassment. I was giving an honest assessment of my life: I’ve never had to deal with this shit, and a big part of the reason why is I’m male; it’s far less likely to happen to me because of my gender.

That doesn’t mean men are immune. This is where it gets tricky, and feelings get hurt.

First off, it appears someone modified Alyssa’s tweet by adding this bolded segment:

“If all the women, men, non-binary, and transgender individuals who have been sexually harassed and / or assaulted write the words ‘Me, too’ on their Facebook page, perhaps we can give people an understanding of the magnitude of the problem.”

It wasn’t long before someone decided to coopt her tweet to add an inclusion beyond the original intent. I was re-watching an episode of Rick and Morty last night, the one where there is a giant head in the sky holding an Intergalactic Idol music competition. The giant head gets nuked in the face and replies, “Boo! Not cool!”

To whoever altered the tweet: Boo. Not cool. Don’t hijack stuff. Start your own stuff.

And now this is where we need to understand nuance, and maybe chill a bit.

Derailment pisses me off. When I wrote my viral piece about women being treated as property, titled “She Doesn’t Owe You Shit,” there were plenty of men commenting “Works both ways” or “He doesn’t owe her shit either.” These men weren’t victims; they were just being shitheads, as was evidenced by their misogynistic follow up comments. It got so bad I decided to write a follow up piece called “Feminism and the Men Who Refuse to Understand.”

The explanatory analogy for why this is wrong states: “You wouldn’t show up at a fundraiser for breast cancer and shout ‘What about prostate cancer?’”

Milano’s tweet mentioned only women, with good reason. It’s related to the case of (douchebag) Harvey Weinstein and how sexual harassment and assault permeates Hollywood, yet people stay silent and even enable it. Harvey targeted women; let’s be realistic, this is something that overwhelmingly affects women more than men. Just about every woman has experienced sexual harassment, and many much worse. Considering this, I don’t see an issue with the “Me too” movement wanting to focus on women.

But you need to dig a bit to understand all that. You need to have seen Milano’s tweet and known it was altered. A lot of the men who chimed in with “Me too” thought they were being asked to. There likely was no intent to derail.

I operate a pretty popular Facebook page and often write about subjects ripe for derailment. I see such derailment all the time. I can recognize it in an instant, and I always call it out.

Well, except for this one comment by some jackwagon on my “NOT me too” post. This is total derailment: “Guys can be harassed to and women can be offenders. Lets keep that in mind.” Fuck that guy and his shitty grammar.

The others didn’t have that vibe. And they didn’t have the “Not all men” vibe or the “I’m only saying all lives matter because I don’t give a shit about black lives” vibe either.

Aside from many men thinking they were invited to chime in based on the altering of the tweet, there is a nuance that changes the landscape of what happened.

When a guy says, “What about the men/whites/straights” etc., it’s just to be a shit disturber. They’re saying, “I’m part of this group and some bad stuff has happened to them so I’m going to use that to derail your complaints and make it about my people instead of yours.”

In this case, however, it’s not about groups, it’s about individuals. When a man says, “Me too,” he’s saying, “This bad thing happened to me.” And I think you could add to this an implicit message of: “I understand. I believe you.”

He’s fighting against patriarchal values and toxic masculinity to be vulnerable and say he can empathize, because he’s felt the same pain. I’m not a mind reader, but I’ve read a lot of text over the years; little of this reads as derailment. It reads like sympathy and solidarity.

The altering of the tweet was not cool. Also not cool was how many women jumped on men who proclaimed their “Me too” status as trying to derail it, to make it about men. Some of the counter comments were vicious and amounted to a giant shut-the-fuck-up.

There is plenty of history of men needing to STFU, but in most of these cases I saw nothing to indicate nefarious intent with men’s proclamations. Many thought they were invited to speak. And the nature of the comments revealed a desire to show empathy, not be contrary.

Which isn’t to say there weren’t a bunch of assholes ragging on the movement. But I don’t think they were doing it via proclaiming they too had been assaulted or harassed.

For the men saying “Me too,” I understand why there was backlash from some women. Derailment is so pervasive I see how the instant reaction to men joining the chorus can be viewed as an effort to derail. There is no shortage of men jumping in online to shut down women’s voices and make it all about men. But that nuance …

A guy isn’t going to say, “Me too” to be a shitlord. He’s admitting he’s been a victim of sexual harassment or sexual assault. In a patriarchal society rife with toxic masculinity, this isn’t easy for a man to do. It shows vulnerability; not something society encourages men to do.

I’m not saying, “Me too” must involve men; but much of the involvement wasn’t coming from a bad place. It was innocent. It wasn’t intended to derail.

Men being victims of sexual harassment and assault does happen. Perhaps we don’t need to talk about it right now, as part of this, but eventually this dirty laundry needs airing to help them too.

On the homepage of www.MaleSurvivor.org is the following message: “You are not alone. It was not your fault. It is possible to heal. It is not too late.”

Sex-based offensives are brutal; they strike deep into a person’s core, ripping them apart. Perhaps men proclaiming their “Me too” experiences weren’t appropriate here, but all things considered, they’re still admitting to being victims of a horrible crime. We shouldn’t jump down their throats for it and automatically proclaim derailment.

Everyone deserves a chance to heal.

UPDATE: I used CNN for my source on the Alyssa Milano tweet. It has since been brought to my attention that, while Milano may have brought her star power to help popularize “Me too,” the campaign is the work of activist Tarana Burke, who started the movement 10 years ago. Follow Tarana on Twitter here.