Lifting Weights Is Better for Fat Loss, But Not for the Reason You Think 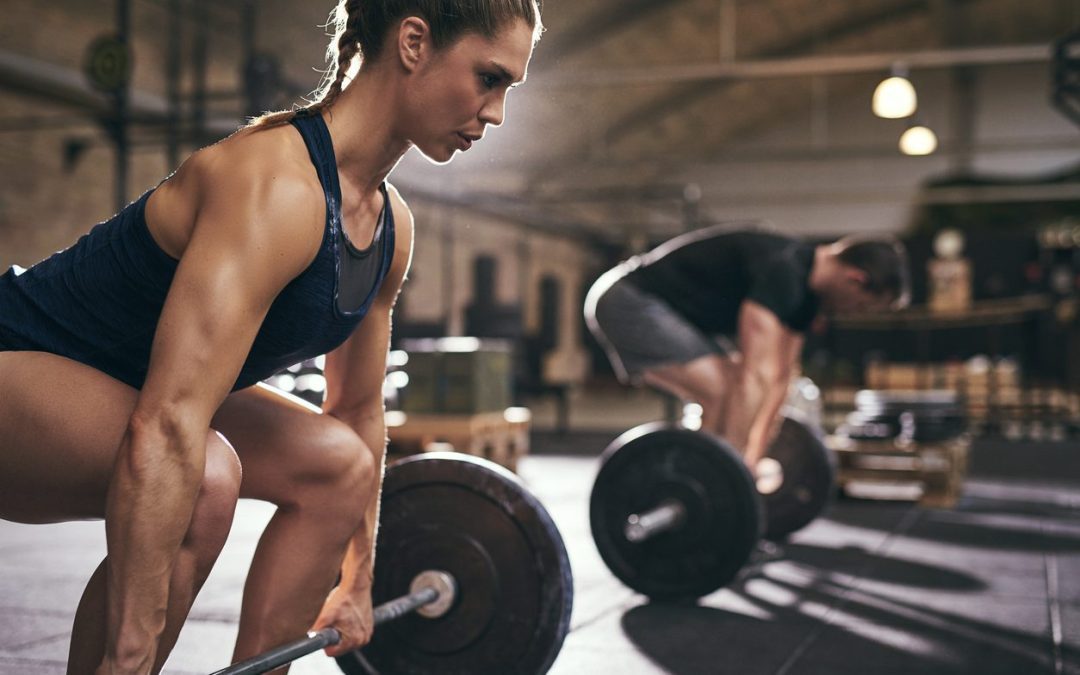 Weightlifting is totally better for fat loss than cardio, because broscience.

In this case I’m going to agree with the bros; even though I’m a Boston Marathon qualifier, there is a compelling argument why weightlifting is better for lowering body fat.

Muscle Mass and Metabolism
Stories have abounded for decades about the metabolic boosting effects of adding muscle, and they’re largely bullshit.

Whether it’s “a pound of muscle burns 50 calories per day while at rest” or if it’s “30 calories,” I’ve never seen any scientific backing for the claim. It’s apocryphal, and I busted it a while back for the Los Angeles Times, interviewing a metabolism researcher and looking at multiple scholarly sources. The reality is that muscle only burns about 6 calories per pound per day while at rest, and if you’re dropping a lot of fat, you also need to account that a pound of fat burns about 2 calories per pound/day at rest.

Hypothetically, if you gain 20 pounds of muscle and lose 60 pounds of fat, you break even in terms of effect on resting metabolism. This doesn’t even take into account that you’re 40 pounds lighter overall for every step you take and every flight of stairs you climb, meaning fewer calories burned each day.

Long story short: even adding considerable muscle mass does NOT transform you into some all-day mega calorie burning machine. Sorry.

The Caloric Cost of Cardio vs. Lifting
Essentials of Strength Training and Conditioning puts “vigorous” weightlifting at 6 METs (six times resting metabolism). Compare this to a fast-ish run of 7.5 mph, and the caloric burn rate is more than double at 12.5 METs. As an example, a guy who weighs 220 will burn about 100 calories per hour on the couch, 600 calories per hour at vigorous lifting, and 1,250 calories per hour running at 7.5mph.

Oh, and never mind about caloric “after burn” for cardio or weights. It’s been way overblown.

It worth mentioning the broscience articles that say cardio slows your overall metabolism. Duh. Any exercise will do that. That’s what getting in shape means. Fine-tuning your body into a higher performance machine, via either weights or cardio, doesn’t turn it into a “fat incinerating blast furnace” while at rest. It makes it more efficient, and added muscle mass doesn’t make much of a dent in this.

There is more to this story, however.

Comparing Via Clinical Study
A 2012 study published in the Journal of Applied Physiology of 119 overweight or people with obesity randomized them into three groups: Resistance training alone (RT), aerobic training alone (AT), or both.

Check out this graph. RT is on the left, AT in the middle, and both on the right:

Obviously, both is the way to go for fat loss, but it’s also worth noting that, for this study, doing both took twice as long as just RT or AT. Not everyone has that kind of time or motivation.

But what about changes in muscle mass? We have another graph: 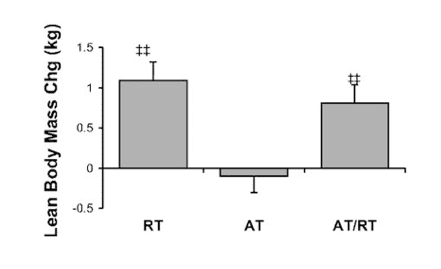 Whoa, that really sucks for aerobic training. They lost muscle. And it still “killz gainz bro” a little when coupled with RT. Using this study as an example, strict RT gained the most lean body mass.

So far, for fat loss, aerobic training is winning. But we’re not done.

But still, look at those two graphs. Even gaining muscle didn’t seem to make much difference for these folks in the just RT group. What’s more, eventually you’re going to stop building muscle, so this benefit is finite.

And yet, it is important to realize that …

Life Is Not a Clinical Study
It’s one study of sedentary and overweight / people with obesity, and not necessarily representative of what happens in the real world. That study is a pretty literal translation of the caloric cost of AT vs. RT. But the way people behave in the real world can be different, especially over time. This study lasted for eight months, but when it comes to physique transformation at the individual level, it can be a years long project that involves different behavioral parameters than an interaction between scientists and study volunteers.

And what all of this has ignored so far is that …

Lean Bodies Are Made in the Kitchen
No matter the exercise type, burning calories is the least important thing exercise does. I’ve been saying this for years. Performance enhancement and health improvements are more important, but when it comes to fat loss, the ability to change eating behavior is a significant benefit of regular exercise.

Exercise sending appetite off the rails is a myth that is based either on extreme amounts, like marathon training, or because of a psychological effect of “I exercised, therefore I earned this treat.” I’ve examined how exercise affects appetite for my Chicago Tribune column, and what it boils down to is that intense exercise builds up the brain power for making better eating decisions. There is some evidence that aerobic exercise may do this better than weightlifting, but that’s a clinical study and this is the real world. I know that it takes plenty of brainpower to push hard with weights. These pumped up cognitive capabilities can be used to transform you into a better eater by enhancing your ability to plan, make decisions, and control the impulse to eat high calorie treats.

So, maybe the brain boost with aerobic exercise is better for dietary control than weightlifting is, but I’m still sticking to my original claim that hitting the iron can be better for fat loss.

I’m finally going to tell you why.

Psychology Rules
It hit me one day while cycling; an epiphany that flushes much of this information down the toilet. Humans are unique creatures with unique motivations. I know so many who love lifting and never do anything aerobic, and they’re lean. Many are ultra-lean. Conversely, I know plenty of aerobic junkies who have higher body fat percentages. I’ve met hundreds, possibly thousands of lifters who don’t do anything aerobic, and vice versa. And the lifters are usually leaner.

What gives? Here’s the aforementioned epiphany.

I don’t have a scientific study, but rather a quarter century of observation and talking to people, plus logic and some good guesses. Weightlifting seems to create a mentality where aficionados are more concerned about what and how much they eat. Visit any weightlifting blog / message board and nutrition and fat loss are hot topics. Conversely, those who only do aerobic activity seem to pay less attention to nutrition, or even use it as an excuse to eat. I’ve sure done it. Many a long bike ride has been done to earn a night of drunken gluttony.

People who lift often do so in a social environment. There is usually (but not always) more emphasis placed on vanity. They talk to one another. They get nutritional advice from trainers (not always the best idea, but that’s for another article), and sometimes, when working with a trainer, clients feel more obligated to get results, and this includes paying more attention to the nutritional aspect.

Runners, swimmers and cyclists are often engaged in a solo activity and not with regular coaching. It has been my experience with this community that they care less what gets shoved into the piehole.

The plural of “anecdote” is not “data,” but in the absence of data there is an observation: runners mostly talk about running, and lifters more often talk about nutrition.

So, there you go.

But What to Do?
Now that you know all this, what choice should you make? Personally, I’m a fan of both RT and AT because they complement each other, and in a perfect world you would give them fairly equal time. However, if you really are time / motivation pressed and can only choose one (and personal preference doesn’t factor in), I’d have to give the edge to the iron, but that’s based on some personal preferences.

For a comprehensive analysis of the various pros and cons of cardio vs. weights, be sure to read my Cardio vs. Weights Cheat Sheet. Regardless of which you choose, my Caloric Deficit Cheat Sheet is also a good resource. You can also feel free to exercise purely for performance, health benefits, and enjoyment, and not give a single crap about fat loss. That’s allowed.

But if fat loss is your goal, and you do choose to go solely aerobic, take heed about not ignoring nutrition, and feel good that you’re lapping everyone on the couch.