Leave Her Alone; She’s at the Gym to Work Out 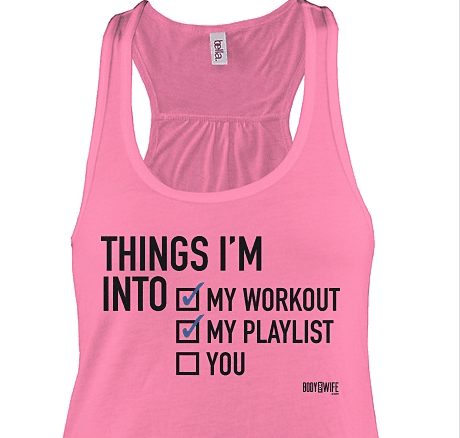 “Women’s Only” gyms are sexist.

That was a heaping pile of sarcasm, just FYI.

There are many reasons why women’s only gyms exist. Conversely, the reason why men’s only gyms barely exist is that there simply isn’t a demand for them. If women started constantly harassing guys in the gym with unwanted attention, giving them unsolicited advice, intimidating them and getting angry and abusive if their pickup lines are rejected, then I expect there would be demand, but that isn’t happening.

What is happening is that men are creating demand for women’s only gyms by creating an environment that is unpleasant for many women to exercise in, namely by treating the gym likes it’s a night club and every woman there is more interested in finding mates than lifting weights.

Some women just want to work out, and men need to let them.

Headphones are the international symbol of “I’m not interested in talking to anyone.” And yet, I’ve seen guys go so far as to walk up to a woman and pull out one of her earbuds so he could start yacking at her. I’ve seen it more than once, and I’ve had women tell me several times that it has happened to them.

Here are some explanations as to why most such advances likely are not welcome.

She’s Not in the Mood
“When I’m at the gym, I’m focused on two things,” Beth told me. “Working out and thinking over anything I’ve been working on.” In other words, she’s not thinking about some guy picking her up.

“My hair is plastered to my head thanks to a combination of bobby pins (to keep the hair out of my eyes) and sweat; and there’s nary a smidgen of makeup anywhere on my face,” Beth said. “I don’t exactly feel attractive at this point. Even if a guy thinks I’m attractive or cute, I don’t. And that goes a long way toward affecting my confidence, so any advance is suspect.”

It Interrupts Her Workout
Lifting weights, counting reps, maintaining good form – all these things require concentration. Coming up and chatting with her, or even trying to catch her eye, interferes with this. Chances are, she’s there to work out, not get worked over by your leering.

Many people time their breaks between sets, and if you’re trying to start up a conversation, you could be blowing her timing. You could also force her to cut her workout short.

“My biggest issue is people pestering me when I’m busy,” Dani told me. “And even when I tell people I’m married, they continue to flirt, and it crosses the line.” She doesn’t mind being social with friends between sets, but hates it when random guys start chatting with her in the middle of an exercise, blowing her concentration.

Lack of time is the No. 1 reason people give for not exercising, and in the modern world, we need to squeeze in workouts where we can. If she must spend time fending off your advances, that’s less time she has for exercise. Not cool.

I’ve noticed attractive women at the gym, but at least tried to be casual about it: a quick glance using the mirror and back to work.

Others are not so subtle.

“I was on the leg press wearing short running shorts, and one guy kept very obviously looking at my legs, and it really creeped me out,” Elizabeth told me.

Kristi had a creepier creep. He approached her at the gym, criticized her form and told her they should be workout partners. Then he grabbed her workout log and wrote his name and phone number in it.

And when she didn’t call, he got angry. Even after telling him to back off, he kept hassling her. Some Googling of his name uncovered that he was a registered sex offender. Kristi approached the gym’s management and, even though it turned out there had been numerous complaints about him, they refused to speak with him out of fear of a lawsuit.

But that’s OK. Kristi got some friends to straighten the guy out. He got the message.

Does this whole article mean you can never speak to a woman at the gym? No, but be cool. Realize the signs of someone who is there just to work out and let her be. The gym is not your personal dating website, and it’s not cool to constantly make people feel uncomfortable.

I’ve also been told that some women don’t mind being approached at the gym if it’s done well. And by “done well” realize that this means the situation needs to fit some pretty tight circumstances. I’ll remind you that the gym is primarily for exercising, not for hooking up.

First off, before talking to a woman, ensure that she is not be wearing headphones. This doesn’t mean that if she isn’t wearing them that she is by default on the prowl, but it’s kind of a bare minimum requirement. Beyond that, I spoke to several women about what does work in terms of meeting people at the gym, and Rule #1 is: “Be a regular.”

If they see you there frequently and you’re not obviously acting like a douche who leads with his penis, they’ll be more open to chatting with you at some point. Another important thing is to “wait for the green light.” Kris told me, “Make eye contact. Make sure the green light is given by a smile or approachable face.”

Another important thing is to “pick your moment.” Meaning: not mid set or during an exhausting cardio session. “If you’re going to talk to her,” Sarai says, “do it while she’s stretching or about to leave.” Kris added, “I’ve had great chats while foam-rolling.”

Beyond that, don’t go for cheesy pickup lines, but rather be yourself. Don’t be condescending by saying something like “Isn’t that a little heavy for you?” You’ll also want to be careful with compliments. “I do tons of squats to keep my ass defying gravity, but a comment about that is not appreciated. You can save it for when we know each other better,” Jen says, adding that she would much prefer a compliment on her strength as opposed to her shape. “A workout-related compliment would totally work for me,” Kris concurred.

So, you don’t have to pretend women don’t exist at the gym, but don’t pretend like they’re there for your amusement either.

A VARIETY OF OTHER DESIGNS / STYLES / COLORS ARE AVAILABLE. VISIT STORE MAIN PAGE TO SELECT.

Thanks to my friend Jodie Parkhouse for the design work.