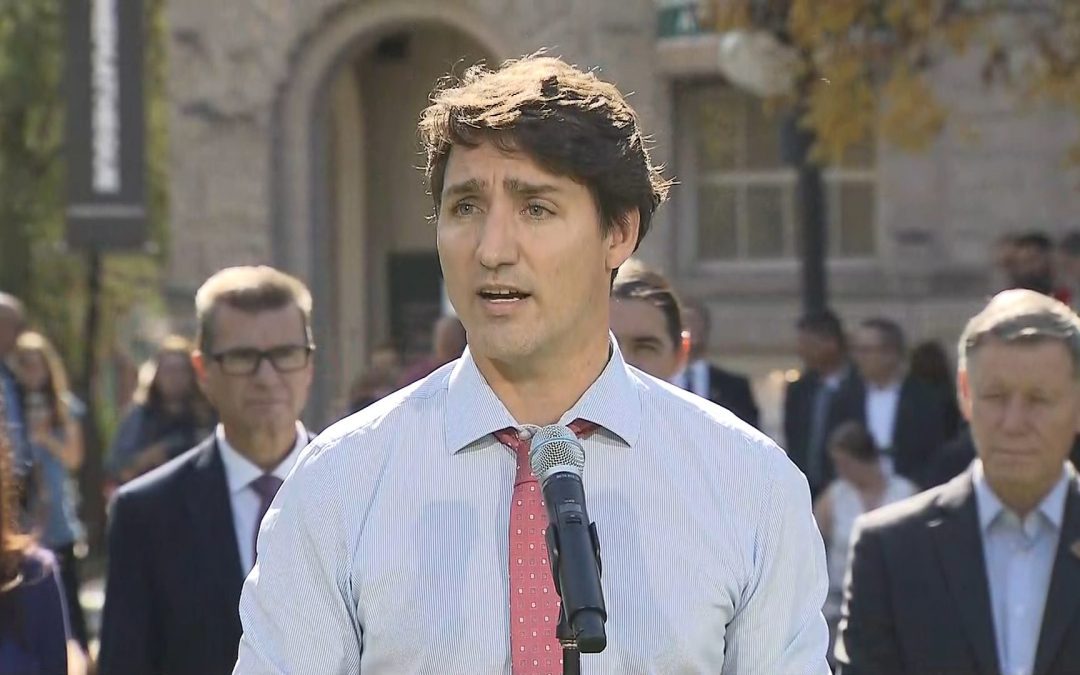 Goddammit, Justin. You fucked up.

Many are right to be upset with him. Racism is a problem throughout the world and Canada is no exception. I can understand that those directly impacted by his fuck up might be pissed.

It definitely wasn’t cool, the brown and black face. Especially since it happened more than once.

I won’t examine the circumstances or when it happened, but instead will look at two things:

The first is that he said, “I shouldn’t have done that. I should have known better, but I didn’t and I’m really sorry.” He also said, “Darkening your face, regardless of the context of the circumstances, is always unacceptable because of the racist history of blackface. I should have understood that then, and I never should have done it.”

I don’t see any excuses in that apology. He owned his fuck up.

The second is the man and his record.

But before I get into that, I want to take a moment to talk about what being Canadian means to me.

In 2014, my first book was published by Random House Canada. That year, Canadian Living Magazine did a piece on Canadian authors, asking them “What was your proudest moment as a Canadian?” I was one of those polled.

My answer was: “2005, when Canada became the fourth country in the world, and the first outside Europe, to legalize gay marriage.”

I was proud because it was a good, kind, and just change in the law. It’s the type of thing Prime Minister Trudeau approves of, and embodies, as he’s no stranger to marching in Pride parades to support members of the LGBTQ community.

In 2015, the ruling conservative party in Canada ran smear campaigns against Trudeau that said, “He’s just not ready.” The message was that he lacked experience.

And there was some truth to that. He’s not the man his father was. His father was a genius. Justin is reasonably intelligent, but he is no genius.

Nevertheless, I voted for Trudeau’s Liberal party in 2015 for one simple reason: I believed Justin to be a good man. I believed him to be kind and caring and inclusive. And when it comes to tough election decisions, I figured voting for the one who seems to be the most decent human being wasn’t a bad strategy.

And yet, people who are kind and caring and inclusive can fuck up. Case in point, these photos of him that recently came to light. Again: Not the smartest PM we’ve ever had.

Here is something to consider: In 2015, Justin Trudeau went to the Toronto airport to greet Syrian refugees who were fleeing a war. “You are home,” Trudeau told them. “Welcome home.”

Does this seem like the actions of a man with a bigoted heart?

Justin Trudeau has been a mediocre Prime Minister. That being said, I’ve been voting in Canadian federal elections for over thirty years and cannot think of a single PM we’ve had in that time who was better than mediocre. So, I’ll say that, historically speaking, he’s about as good at his job as I’ve come to expect possible.

Regarding this scandal, I believe there was no malice. There was stupidity, yes. There were fuck ups. But I don’t think it came from a bigoted heart. Perhaps I’m wrong, and he knew full well the racist acts he committed, yet did them anyway. But even if that’s the case, it’s fair to say he has changed. Justin’s behavior as PM, and his platform as a leader, is not one that is marred by hateful behavior.

Nevertheless, people—especially those marginalized by this behavior—have every right to be angry with him. Conversely, those who lost their jobs to automation and want to use Trudeau as a scapegoat may wish to not blindly believe what conservative pundits tell them.

Anyway, regarding a lack of hateful behavior, the same cannot be said for the leader of the party that may unseat Trudeau as Canada’s next leader.

Andrew Scheer wants to be Canada’s next prime minister, and it’s possible he may achieve that goal. This is a man who, in the year Canada legalized same sex marriage, was vehemently opposed to it. He “likened same-sex marriage to trying to re-define a dog’s tail as a fifth leg.” (Link.)

Scheer never apologized for that.

Scheer has never participated in a Pride event.

Scheer’s record on a woman’s right to control her own body is most concerning.

I know that Justin Trudeau is not perfect. His record on keeping election promises may be good, but many First Nations members feel betrayed. And I wouldn’t be surprised if more indiscretions of his come out. I reserve the right to eat these words I write. I hope I’m not wrong about him, but I must concede it’s possible.

I think Justin means well. I think he tries. I think he has a good heart and mostly represents inclusive and caring values. These are things that are important to me when it comes to voting. It’s why I will vote for his party again next month.

Perhaps you disagree when I say I believe Justin Trudeau to be a mostly good man. That’s fine.

If this scandal has you thinking you can’t vote for his party, that is also fine. There are other parties to vote for.

However, if you lambast Trudeau for this fuck up, all while intending to vote for the party of Andrew Scheer, then I am bound to point out the hypocrisy.

Andrew Scheer, by his actions from years ago, and ever since then, have shown that he is not a good man.