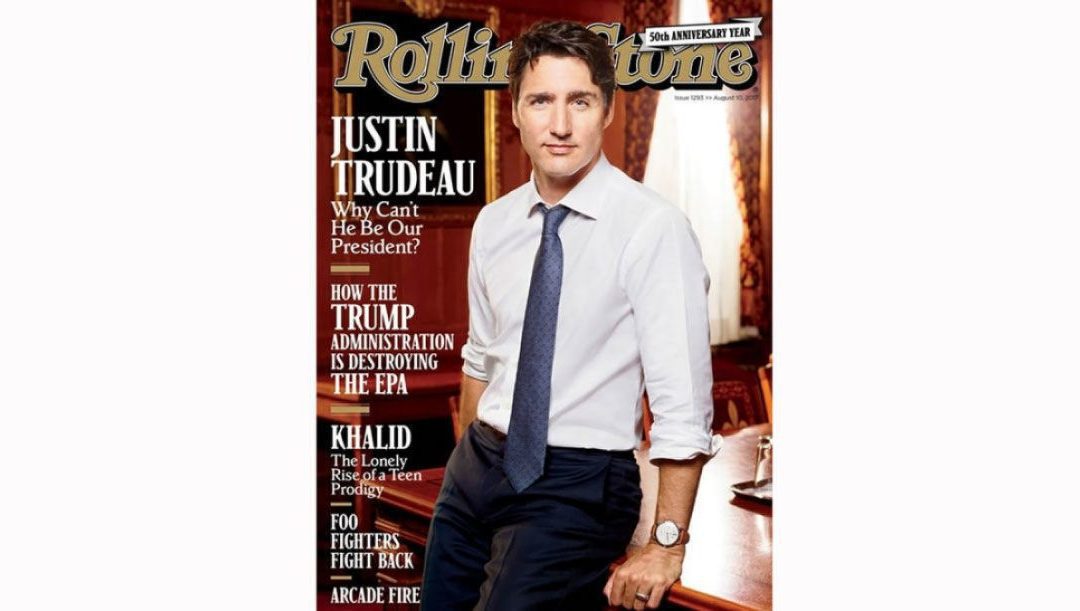 I wonder if Canadian Prime Minister Justin Trudeau realizes how much of his current popularity is owed to Donald Trump being president.

I am Canadian. I voted for Justin. I would vote for Justin again. I almost certainly will vote for him again, but I’ll explain more on the next Canadian election in a bit. I’ll talk about why I voted for him in 2015 first.

I voted for him because he seemed like a good guy with a good heart. Also, I usually vote for his party at the federal level. The guy who had been in charge for a long time was too conservative for my liking, and kind of a dick to boot, so no way I was voting for that dude. The other guy running was too far left, and leader of a party that has never formed a federal government in Canadian history. He also kind of creeped me out.

But Justin seemed … nice. Like he wanted to help. I figured we could do worse.

Looking south, it’s true. A country can do worse.

Justin’s father, Pierre Trudeau, spent a whole lot of years running Canada. Fifteen, to be exact. Pierre was a brilliant man. It’s been said Justin got his dad’s charm and his name, but not his brain. He’s not at the same intellectual level. Justin is reasonably intelligent, but lacking his father’s genius.

Justin, in my opinion, is doing an okay job. I might go so far to say a “good” job. But certainly not great. Yet there he is, on the cover of Rolling Stone, with the caption: “Why can’t he be our president?”

I expect the missiles will begin to fly once someone explains to Trump which direction Canada is in.

The piece points out some of the differences between Trump and Trudeau. Donny defunded Planned Parenthood. Justin is very pro-choice. Trump wants to making pot smoking more illegal, Trudeau is looking to legalize weed nationwide. Canada is standing up to Russia, whereas the United States is climbing into a urine soaked bed with Putin. Trudeau is acting to mitigate the opioid crisis, yet Trump’s position seems to be more along the lines of “Fuck those guys.” The American president doesn’t appear to care about climate change, whereas the Canadian prime minister’s stance on the environment is … well … that one’s complicated.

According to this piece, Trudeau is trying to be both a defender of the climate and a champion of big oil.

Beyond that, there are plenty of broken promises. The website TrudeauMetre, which proclaims to be “a non-partisan collaborative citizen initiative that tracks his performance with regards to his electoral platform,” has details. Of his 226 election promises, 67 haven’t been started despite almost two years holding majority power, 71 are in progress, 54 have been achieved, and 34 have been broken.

One of the big complaints regards promises of electoral reform. It’s hard to blame the guy. Why would you reform a system that swept you into a majority government? But about that majority government. It doesn’t mean most Canadians wanted him as their leader.

Here is how the 2015 election broke down in terms of popular vote:

More than 60% of Canadian voters wanted a different guy. That’s one reason why you’re hearing a lot of Canadians say of Justin anything from “Meh” to “Fuck this guy.” But because of the parliamentary system, his party holds a majority government. Which kind of means what Trudeau says, goes.

South the border, a lot of the anti-Trumpers will see Trudeau and say, “I will have your babies!” Because, comparatively speaking, the dude walks on Lake Superior and turns Michigan tap water into Malbec. The pro-Trump crowd likely hate Trudeau for the same reasons they love Trump. The two are quite different.

I said he’s not that great, but that needs some qualification. He’s a politician. There is no such thing as a “great” politician. BUT! But … I’ve been voting in Canadian federal elections over three decades, and I am comfortable in saying that of all the prime ministers we’ve had in my voting memory, Justin is the least shitty.

In Canada, we bitch about our leaders as much as anyone, and “least shitty” is high praise. Trudeau, in my opinion, is doing a good enough job. But he’s still a politician. Anyone who is “great” I don’t think could get elected. Welcome to democracy.

I will find fault in any politician, no matter how “great.” I live in a city run by the guy who won the 2014 World Mayor Prize – they named Naheed Nenshi the best mayor in the world – and I still have issues with him. My city doesn’t have fluoridated water, for fuck’s sake!

Despite my complaints, there are many things I appreciate about Justin Trudeau. I like that his cabinet is diverse and representative. I like that he welcomes Syrian refugees and marches in gay pride parades. I like that he acts like a feminist rather than merely pays lip service. I like that he’s never given me a reason to doubt he does care about not just the people of Canada, but the citizens of the world. Like I said, I think he has a good heart. When it comes to a leader, a country can do worse. We’ve seen worse. We are seeing much worse in other areas of the world right now.

So, comparatively speaking, maybe he is great.

I will almost certainly vote for Trudeau in the next election. I can’t see the NDP as being a player at the federal level because they never have been. And Andrew Scheer, who is the new leader of the Canadian Conservative party, is too conservative for my liking. Scheer said he wouldn’t propose legislation on abortion, but he is against it. I can’t see voting for someone who is anti-choice.

Justin, I like you. You’re doing okay, for a politician. Barring some colossal fuck up, I’ll be there for you in the next election. You may not be great, but that’s not what’s needed to get my vote. You just need to suck less than everyone else.

When it comes to many world leaders, you definitely suck less.