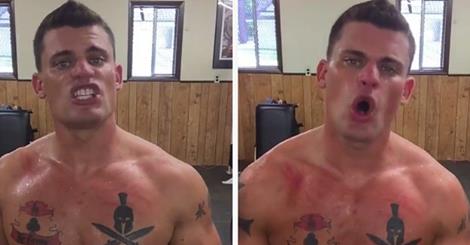 “You are a disgusting fat body, Private Pyle!”

The drill sergeant in Full Metal Jacket spoke those words, and we all know how things turned out for those two characters.

Fictionalized bathroom murder-suicides aside, when you have a captive audience of enlisted men who have no choice but to follow your orders, being a raging douche canoe can motivate them to succeed. But there is a big difference between what you can expect of soldiers under your command that you are training to survive in combat and how to motivate the general population.

This brings me to John Burk, an Iraq war vet and former drill sergeant as well as a self-styled “fitness motivator” who thinks that Full Metal Jacket style is the way to help people lose weight. For this week, at least, I believe he qualifies as the biggest douchebag in fitness. As evidence, see how far you can make it through this video:

Why even talk about this guy? Because the video has gone viral. Why has the video gone viral? Well, why is Donald Trump ahead in the polls for leadership of the Republican Party?

In his video Burk says that fat people are “lazy” and “utterly repulsive and disgusting.” It’s a five-and-a-half-minute long hate-filled rant about how despicable Burk finds two-thirds of the population.

Burk says, “I’m not going to accept you for who you are with that bullshit excuse of ‘You should love me because I’m beautiful.’” News flash, John: No one is saying you have to find fat people beautiful. Your tiny little brain is allowed to find attractive whatever you wish.

Burk also says, “It is not okay to be overweight.” Well, there are valid concerns about excess body fat, especially that which is located around the midsection. I wrote about the dangers of obesity for my Chicago Tribune column and have also done battle with the misinformation spread by Health At Every Size. Nevertheless, body fat is but one indicator of health, and there is a lot more to the equation, which is why the Edmonton Obesity Staging System was created.

Burk proclaims that he wants to motivate people to change, but this kind of ranting screed about how much fat people suck; how they’re “repulsive” and they’re gonna die and their kids are gonna be bullied (and then die) and they need to stop being such lazy, fat fucks … that is NOT the way to get people to change their behaviors.

I’ve written numerous articles and even a book on fitness motivation. I’ve read reams of research and interviewed the leading experts on the subject, and not once did I ever discover that shame and fear were effective tools for motivating people to adopt healthier habits.

In fact, the opposite is true. The research shows that shaming people with obesity leads to weight gain. In a 2013 paper published in PLoS ONE, researchers from Florida State University asserted that not only does stigmatizing obesity lead to poorer mental health outcomes, but the authors stated: “Rather than motivating individuals to lose weight, weight discrimination increases risk for obesity.”

And another study published in the journal Obesity in 2014 looked at 2,944 UK adults over four years and discover that those who reported experiencing discrimination over their weight gained more pounds than those who did not. After accounting for baseline difference the study found that, on average, those who faced fat shaming gained a kilogram, while those who didn’t lost 0.7 kilos. See how that worked? Shaming = weight gain / no shaming = weight loss.

In a Twitter exchange with John he told me “I don’t coddle” and “I don’t baby people.” As I wrote in my piece about HAES, there is a difference between coddling and compassion, just as I also wrote about how there is a difference between inspiring and shaming people. Burk also told me he doesn’t listen to critics. Well that’s pretty damn obvious, because if he did listen to constructive criticism then perhaps he wouldn’t behave like such a colossal asshat.

Burk seems to think the opposite of coddling and babying is to go full raging and shaming douche nozzle. The reality is, you can get the tough news about the dangers of obesity across and expose the faulty logic behind poor excuses without destroying self-esteem and damaging mental health in the process.

But John has his supporters, yo! Many on his Facebook page and on articles written about his video have come out with a collective “Right on!” about how John has “hit the nail on the head,” and they’re totally motivated now, and stuff.

Yeah, let’s talk to those “motivated” people a year from now and see how they’re doing. This is coupled with the fact that for every one person he might have helped with this video there were likely ten others made to feel horrible by it, adding to the negative emotions society heaps on them. It’s one more thing that causes obesity to spiral out of control.

And even for that rare person who appreciates John’s approach, the fat-shaming train wreck game show The Biggest Loser provides clear evidence that such methods rarely work long-term. Just like in an infantry boot camp, the contestants on the show have little choice but do what they’re told by their fat shaming “trainers.” And because they’re stuck 24/7 in that calorie-deprived labor camp, they do lose weight.

But as soon as they get their freedom, despite having the overwhelming extrinsic motivation of their very public weight loss, the majority of the show’s participants gain the weight back.

In fact, John Burk is the epitome of what is wrong with the personal training industry. We’ve seen his like before – this kind of shaming by trainers is nothing new – and we’ll see such ilk again in the future. The older versions of John Burk didn’t help people with obesity, and the new breed won’t either.

I have lost count of how many people have expressed their gratitude for me helping them discover a passion for exercise and healthy eating after a previous trainer had all but destroyed such passion through shame and guilt and heaping insults.

Obesity is a complex phenomenon that has significant environmental causes, and the solution to obesity will be equally complex and require changes to our environment to generate measurable results.

One thing is for certain, screaming at people like an insane, hateful jackoff isn’t the cure for obesity.