This piece was first published on my old site on January 20, 2014. It was fairly popular, being shared on Facebook about 700 times.

No, it’s bloody well not.

I didn’t want to keep you in suspense with that click-baity headline. People aren’t knocking over convenience stores or fencing grandma’s jewelry in order to fund their cupcake habit. Sugar, or any food, does not meet the criteria for being called an addictive substance.

But saying it is sure does sell books.

This morning I received an email from a publicist with this as the opener:

Sugar is the new controlled substance. More addictive than cocaine, the deadly white stuff has become the focus of health professionals worldwide who are highlighting the dangers of over-indulgence.

The book is entitled The Sugar Detox. The lead author is an RD, and as much as I respect the designation, some go to the dark side. One RD wrote a book called Bread is the Devil. I think it maligns the profession. Anyhoo, the other author is an MD – another one gone to the food fear mongering dark side, joining the ranks of Dr. Wheat Belly and Dr. Grain Brain and Dr. Friggin’ Oz – but this MD is a dermatologist.

I guess that’s why part of the shtick for this book is about how bad sugar is for your skin, and how detoxing (another trendy word to pull in the gullible) from sugar will make it glow, and stuff.

Another book I’ll make mention of is The Hunger Fix, by Pam Peeke, another MD. I’ll share the subtitle to see if you pick up on those hot button words that translate into instant sales: “The Three-Stage Detox and Recovery Plan from Overeating and Food Addiction.”

Oh, and the endorsement on the cover is from Dr. Oz, just FYI. He says the book “… outlines a practical plan to navigate the treacherous tightrope over the food addiction ravine.”

I’ve read Peeke’s book cover to cover, because overall it’s not actually too bad. It is competitive to my (and my co-author Margaret’s) book, because Peeke advocates exercise as a tool to control eating behavior. Nevertheless, Dr. Peeke fails to make her case for food as an addictive substance. Also of note is that while Peeke goes into detail on how junk food affects the brain, providing ample details about dopamine and how intake of highly palatable food influences its secretion, conspicuously absent from the book is the word “opioids.”

Opioids play just as important a role in creating a compulsion to eat junk food as does dopamine, so how did she miss that? And yes, the appropriate word here is “compulsion,” not addiction. Highly palatable food can be compelling, but it does not meet the criteria for being a truly addictive substance.

In a 2012 study in Nature Reviews, the authors concluded that although highly palatable food may have addictive-like properties, it does not meet all the criteria of an addictive substance. “The vast majority of overweight individuals have not shown a convincing behavioral or neurobiological profile that resembles addiction,” the authors wrote.

Despite efforts by some to have food addiction included, the fifth edition of the Diagnostic and Statistical Manual of Mental Disorders (DSM) did not classify “food” as an addiction. According to Nicole Avena, a research neuroscientist in the fields of diet and addiction at the University of Florida College of Medicine, even though highly palatable food affects the same brain mechanisms that addictive drugs do, there is not enough evidence to warrant a full psychiatric diagnosis for food addiction. “There are a lot of differences between food and drugs,” Avena told me.

“It’s a matter of degree and vulnerability,” said Carolyn Davis, a professor at York University in Toronto specializing in the psychobiology of obesity. “Regular drinkers aren’t necessarily addicts; they aren’t dependent. When it comes to food, I think it’s a small population that is truly addicted.” Davis said she was struggling to separate food addiction from being an extreme form of binge-eating disorder, which is in the DSM. “‘Food addiction’ isn’t a good term,” she said.

The Nature Reviews piece I referenced said food doesn’t meet the criteria to be an addictive substance. And in that review they make their case with a convincing graphic. 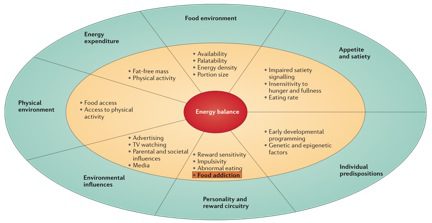 This graphic is entitled “Mediators of energy balance.” Energy balance is what affects body weight, no matter what some low-carb zealot tells you. Look at the highlighted portion of the image. That’s the role of “food addiction” in terms of causing fluctuations in body weight. In the grander scheme of all the things that can affect waist size, it’s one small cause in a sea of larger issues in the obesigenic environment. For those who don’t know, the word “obesigenic” is scientist speak for “it makes you fat.”

Getting into additional details in the Nature Reviews piece, the authors destroy every argument made for linking food to having addictive properties. For example:

Tolerance: The addiction model proposes that needing more food to reach satiety is the same as needing more drugs or alcohol to get intoxicated. The authors dismiss this based on the fact that intoxication and satiety are not the same.

Withdrawal: The authors state that there is no convincing evidence that humans experience withdrawal symptoms for food. Think of what happens when you go off chocolate. Can you realistically compare that to a person detoxing from drugs or alcohol? No, you can’t.

Time commitment: Drug and alcohol abusers spend a lot of time seeking their mind-altering substances, as well as times focused on using them. There is no way to make a realistic equivalency to food because of the pervasiveness it has in society. Junk food is easily available and does not create impairment that requires foregoing of other activities.

Other criteria for qualifying as an addiction are things like persistent desire and larger amounts consumed than intended, but the authors states that “This criterion requires the application of severity and impairment thresholds to be meaningful.” In other words, the severity isn’t there, and with junk food consumption there isn’t any neurological impairment. Food doesn’t intoxicate.

So why tell you this? Why bust the myth of food as an addictive substance? Isn’t this one of those separating fly shit from pepper kind of things I rail against?

The answer is: I tell you this because I don’t want you to despair. I want you to have hope that you can change your eating habits and resist the call of the cookie, the cupcake or the cheeseburger. Telling people sugar is more addictive than cocaine makes the situation seem hopeless, but there is hope. Lots of hope.

Why do people have such a hard time battling their food compulsions? Because they’re going about it the wrong way. We use blind restriction and willpower, and it doesn’t work. Food is not addicting, but it IS compelling. It is a challenge to resist regularly shoveling sugary/fatty/salty treats into our pieholes, and to effectively meet that challenge you need to develop a set of skills. Renowned obesity researcher Dr. David Katz told me eating healthy is all about skill power rather than willpower. Willpower is a finite resource that gets worn down, and then you eat crap. Developing skills in regards to food takes time, but it reduces the need to rely on willpower alone.

One of those skills is avoiding food cues. A food cue is something that compels you to eat, and is often an image of tasty food. Information about food cues is practically nonexistent in The Hunger Fix, and yet Dr. Peeke is guilty of perpetuating them by putting a yummy cupcake right on the front cover (and potato chips on the back cover). She didn’t seem to realize that her book cover makes the alleged food addicts crave junk food more because that image is enticing to them. Same goes with the image on the cover of The Sugar Detox. Hell, Dr. William Davis says we’re all gonna die from wheat bellies, and yet the cover of his book is a stack of bagels. For people who claim to be so well informed about food and wanting to help you becoming a better eater, they make critical errors in permitting these “demon” foods to be advertised on their book covers, because they only serve to reinforce the compulsion.

So what are these skills you need to learn in order to transform into a better eater? Well, it requires a lot more space to describe than I can fit into a single blog post. It takes an entire program, and thankfully, I’ve already written that program up for you, working alongside a brilliant woman with a PhD in psychology that focused on eating behavior and the link to obesity. The program was vetted by a respected RD as well.

The program is called: Lose it Right: A Brutally Honest 3-Stage Program to Help You Get Fit and Lose Weight Without Losing Your Mind. It’s being published by Random House Canada on April 1 of this year.