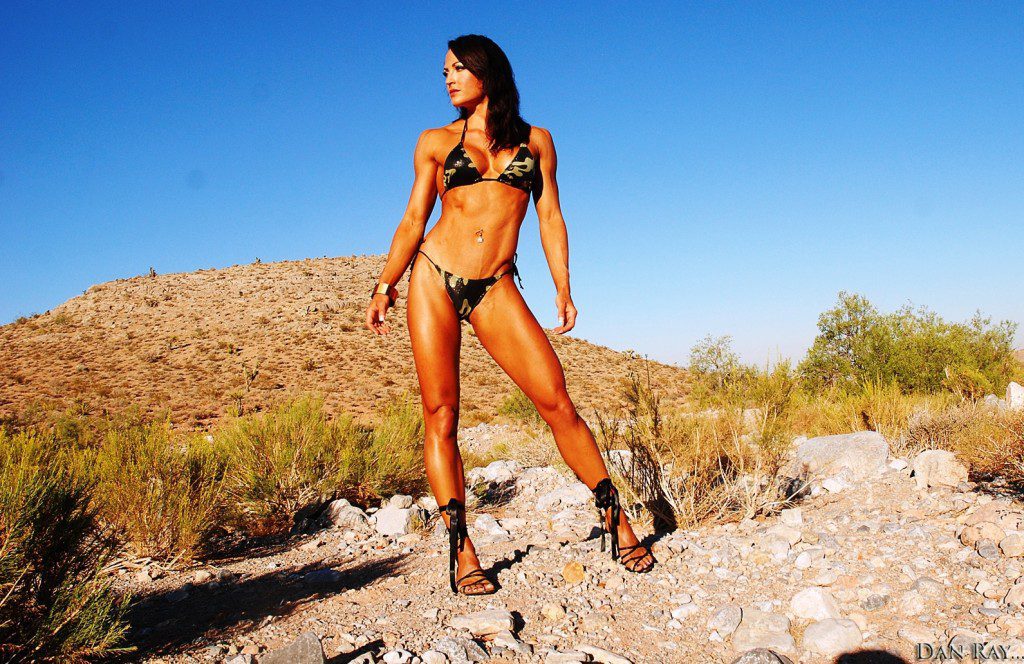 “Nobody ever became a bodybuilder by accident.” My friend Jen Sinkler told me this. We were chatting about the fear some women have over lifting heavy weights. “I don’t want to bulk up,” they say. Well, bulking up takes years of tremendous effort, a specific muscle-building nutrition program, and for those on the extreme end of the spectrum, pharmaceutical assistance.

Here is what happens when women lift weights. They become:

On that last one, lifting is like a fountain of youth. Lifting keeps you young because it makes it possible for you to keep doing stuff – difficult stuff – well into your senior years while others are falling apart on the coach glued to Downton Abby. Or something. I have no idea what that show is about.

Thirty-three-year-old Erin Stern is a fitness model and the reigning Ms. Figure Olympia. She’s graced the cover numerous fitness magazines, and I happen to know a number of women workout warriors who have girl crushes on this physique competitor from Tampa, FL. She is the reigning queen of fitness, which probably makes you think she eats nails for breakfast, spends all her time working out, counts every calorie, and has the for-real tiger blood that Charlie Sheen can only dream of.

And that’s one of the reasons I like Erin. I’ve interviewed her twice now, and while you might have the expectation that Ms. Figure Olympia is all about GRRRR! HARDCORE!, the reality is she takes a practical and passionate approach to fitness that anyone can learn and take inspiration from.

And no matter what your fitness goals, Erin someone worth listening to.

“Women should lift for their overall health, strengthening and protecting their joints and bones,” Stern told me. “You’ll be able to carry your groceries and kids easier.” Echoing Jen Sinkler’s comments, Erin feared bulking up when she first started lifting weights and potentially losing her femininity, but those fear were unfounded.

“I learned that I could push myself and lift as heavy as possible and it was very hard for me to put on muscle mass.” That’s a reality of being a woman. Even most men struggle to gain muscular bulk. I lift hard, am six-feet tall, and am a lean and mean 170 pounds. Like Jen says, you won’t become a bodybuilder by accident. Even working your way up to an extreme level of lifting won’t lead to waking up one morning to find you’re unintentionally huge. “It’s not a realistic fear,” Erin said. “Under conditions where I’m trying to bulk up I really had to try hard, taking creatine and timing nutrients properly; even then it took a couple of years.”

If you’re still fearful of lifting, “You can try circuit training first and then move to heavy lifting later on if you want,” Erin said.

“There should be a purpose to why you’re going to the gym,” she said. “For a lot of people it’s to become more athletic and stronger. I’m a fan of sport-specific training.”

And what should come as a “Well, duh!” to anyone who knows their way around a weight room, Erin is a fan of focusing on big, compound lifting movements that involve using more than one joint.

These are the six basic lifts Erin advocates be the focus of any lifting routine:

(To learn more about these moves, here’s a book I love: Strength Training Anatomy. The author has one for women as well, but I advise everyone, regardless of gender, to  the one linked above, as it’s applicable to either sex and has 50 more pages than the women-specific book.)

There are some good reasons why Erin focuses on these six moves.

“Esthetically it’s important because muscles are working together so they flow together better,” she said. “It’s also better for time management because you’re working all your muscles and burning more calories than with simple isolation movements.”

I asked Erin about her opinion on isolation movements like biceps curls.

“My opinion has changed recently,” she said. “Since I started doing chin ups, my biceps have not only gotten stronger, but esthetically, they look better.” We both agree that things like biceps curls have their place for finishing off, but the way to build them best is via the compound, multi-joint movements.

I was pleased to learn that Stern takes the same approach to weightlifting machines that I do.

“Machines always have a purpose. They’re good for beginners to learn how exercises work. As a finishing exercise it’s always good. If you don’t have a spotter they can be good too.” Yes to all of that. For me, I always start with free weights, but towards the end of the session my muscles are done for when it comes to things like free weights. However, there is still some gas in the tank, and I may want to finish things off with a machine. There’s nothing wrong with that. However, for the serious lifter, machines shouldn’t be where you start.

On the aerobic training side, “I don’t do much,” she said. She prefers mixing things up with intervals and Tabata workouts to get leaner, but reports, “If you really love long duration cardio it is possible to strike a balance. I’m not saying get rid of it.”

Although Erin says she’s not a follower of “paleo dieting,” she said, “If it wasn’t around 10,000 years ago, I try not to eat it.” She prefers to stick to the outside ring of the grocery store and focus on foods with one ingredient. As an example, the ingredients in one apple = one apple.

“I’m not too concerned about calories,” she said, but she doesn’t eschew carbohydrates. “I need those carbs because of the Olympic lifting and the sprints I’m doing at the track. I tried low carb and it didn’t work for me.”

And when it comes to sustaining a lean physique, Erin knows the biggest secret of all.

“I cook a lot of my own meals. I prefer it that way.” Obesity rates have risen dramatically in the last 50 years, and a big reason is people have forgotten how to cook. When I was a kid, we almost never ate out – it was a rare treat. Now it’s commonplace, with a doubling of food dollars spent eating out, and restaurant, take out and fast food meals pack a helluva caloric wallop.

That doesn’t mean Erin never eats out, however.

“When I eat out I always go for grilled meat, a salad and brown rice. Making it as clean as possible. Getting dressing on the side. I don’t stress out too much about it.” The benefit of this clean eating is that, “When you start to eat clean and your body becomes accustomed to consuming simple products so a McDonalds cheeseburger just doesn’t have the same allure. When I do crave junk food I usually think ahead about how it’s going to make me feel crappy, and I usually end up getting something else like a frozen yogurt.”

I had a frozen yogurt the other day. First one in a long time. 150 calories, tasty and filling. Good stuff.

From an eating motivation perspective, Erin has some great advice. “Don’t call it a diet. A fad diet is not going to be sustainable. Make small changes over a long period of time.” Yup.

Beyond the traditional workouts

But Erin also realizes that her physique competing can be a little at odds with competition. “I’m going to do high jump, and I’m thinking about doing 400m, but I haven’t decided yet because it’s a lot of training, and not sure if I can maintain my physique if I’m training to do the 400. I’m carrying some muscle for esthetic purposes that won’t make me any faster.”

I know about that. I’m training to qualify for the Boston Marathon, and there is a lot of muscle I’m carrying that is completely useless for this endeavor. The extra weight will slow me down over 26.2 miles. Still, I intend to keep it.

I’ll save Erin’s best advice for last. Know that it’s something I firmly believe in and advise you follow:

“Find something you enjoy doing,” Stern told me. “There are thousands of different ways to get in shape.”