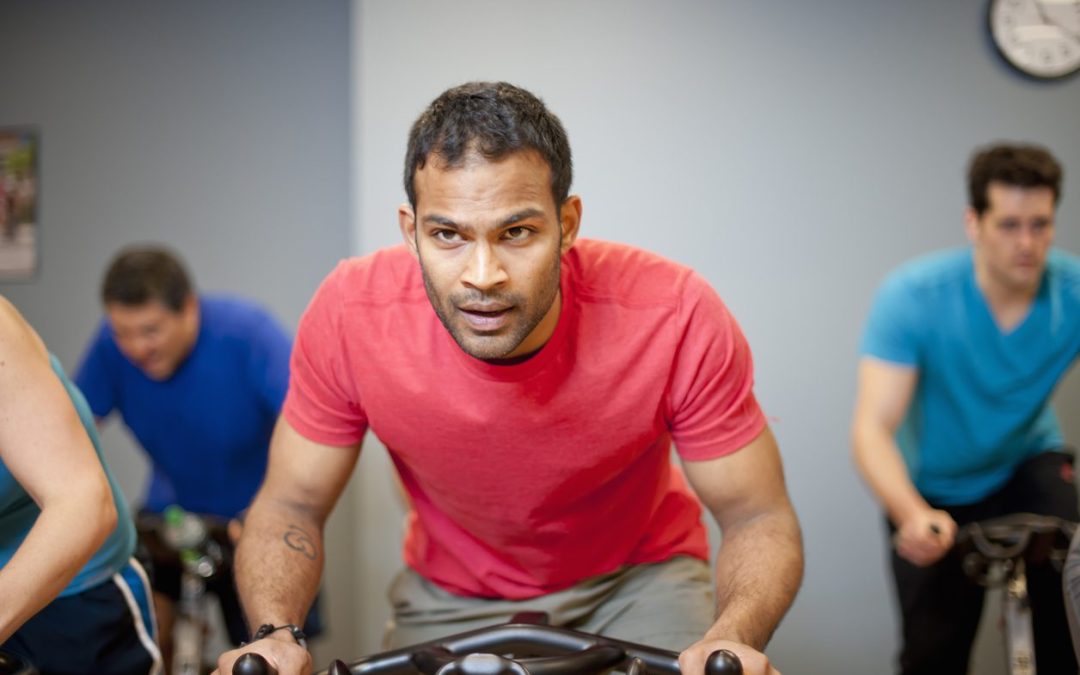 I am a workout hermit. I ride alone, I mostly run alone, and I lift alone in my little man cave. One day, I envision foregoing all human contact and filling said man cave with cats bearing names like “Schwarzenegger” and “Thor.”

But in days gone by I have done the social thing when it comes to exercise. I strongly advise being social to those who struggle with fitness motivation, as it is a proven method to boost adherence. For a time, I was a member at a high-end club with free indoor cycling classes.

And just FYI Spinning® is to indoor cycling as Kleenex® is to tissue. The former is a brand and the latter is a category.

There are many different types of indoor cycling. I don’t know if the type I did once a week for about two years was Spinning or not, but what I can tell you that it was not stupid. It was not stupid because the instructor did not have us doing stupid shit.

We rode our bikes, hard.

And it was great fun. It was motivating. Why was it motivating? Because the instructor was awesome. The instructor, whose name I cannot recall, often wore a T-shirt that said, “I yell because I care.”

But it was fun yelling. He had a great personality that people reacted positively to. We pushed ourselves hard in those classes, which were always full to capacity, and lamented if our favorite instructor wasn’t available. Sure, it was still fun with other instructors, but this one guy stood out as awesome, motivating and encouraging. You never wanted to miss a class he was teaching.

And not once did he ever have us doing stupid shit on the bike.

I was probably the first person to publicly criticize SoulCycle in major media. Here is the front-page feature piece I did for the Los Angeles Times over two years ago. Have I ever done a SoulCycle class? No, I have not, for two reasons. The first is that at the time they were only offered in New York and LA, and I live in Calgary, and the second is that I have serious low-back issues, and I won’t put my lumbar discs in jeopardy for a story.

However, I did interview a woman with a PhD in exercise physiology who is both an indoor cycling instructor and has taken a SoulCycle class for that story. I interviewed a bunch of other experts who didn’t have much nice to say about using a stationary bike for things other than stationary cycling.

Now, we have a recent article in Slate that says SoulCycle has jumped the shark. The author of that piece linked to mine in it, and she told me mine was very helpful in writing hers.

But this isn’t meant to be a rag just on SoulCycle, because there are many clones out there. There are many indoor cycling classes who try to make them engaging and fun with gimmicks rather than quality instruction.

They use weights, yoga, bars, upper body workouts and exercise practices that any qualified exercise physiologist will tell you are unsound in order to keep the clients entertained.

The problem with this method of instruction is twofold: You don’t get as good a workout when you’re not focused on proper cycling technique, and you can become injured. Generally, it’s not one of those “GAH! My back!” moments, but rather micro-trauma that builds up over many months, so that one day you simply find you’re in severe pain, and you don’t even know why.

It’s NOT the silly gimmicks that make a class motivating.

It’s the quality of the instructor.

As an instructor, you must endeavor to be a motivating force that people are drawn to. As a client, you should seek out people who motivate you and don’t make you do stupid things. You’ll get a better, safer workout and not wreck yourself so you can keep going to class for years to come.

Oh, and never listen to what Tracy Anderson says about anything fitness related.

This piece was first published on my old website on January 13, 2014. It was quite popular, being shared on Facebook almost 4,000 times.