How to Stay Lean Without Losing Your Mind 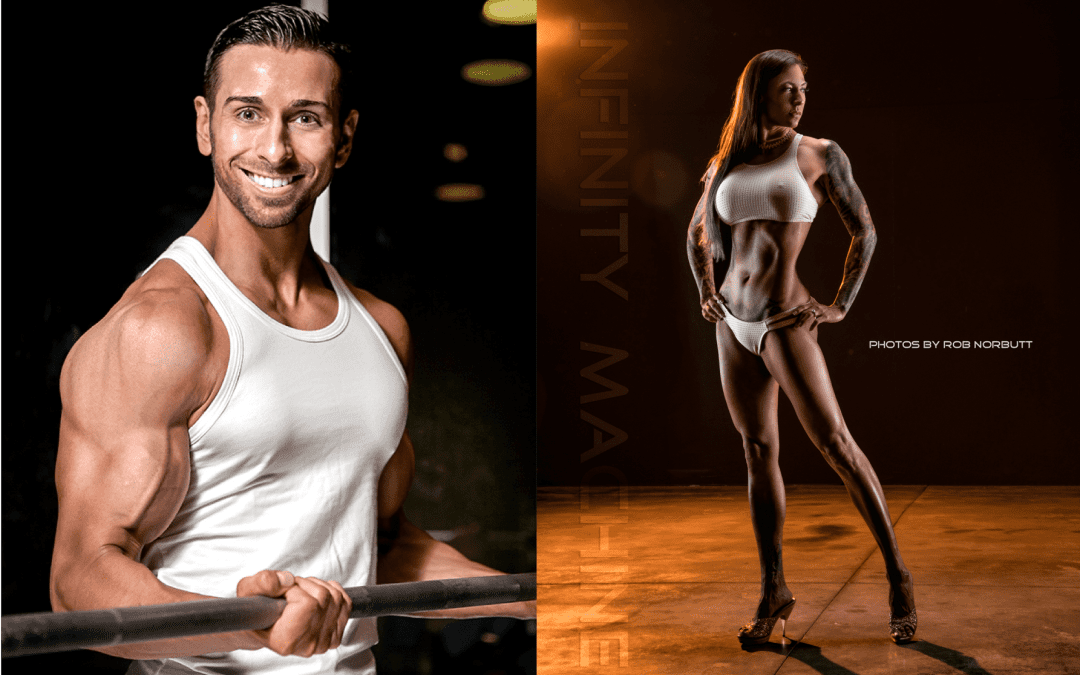 Just like there is much maligning of obesity, there is also an (admittedly lesser) tendency on social media to crap on people with the fitness model physique.

I’ve written a lot about body acceptance and not obsessing over the scale or what you see in the mirror. While fat shaming is unquestionably worse, fit shaming is a thing. I wrote a piece for the Chicago Tribune about women who were shamed for being fat, then shamed again, although in a different way, after getting fit.

When we see someone who is incredibly lean and fit, there can be a tendency to judge them. Some may say they are vain, are obsessed, have eating disorders, don’t have busy lives … And the reality is, some of that can be true. Disordered eating behavior can be a problem for those with the ultra-fit-looking body. Perhaps they are obsessed. Or, perhaps it’s their job to look that way.

I’ve written about how much it can suck to be super lean for Men’s Health. I also interviewed a documentary filmmaker for the Los Angeles Times about how “unbalanced” her one and only fitness competition made her life. But the reality is, there are people who can live that way while also having busy lives, and actually enjoy the process.

And we shouldn’t hate on them for it, or assume we know their story, or think poorly of them because of what they’ve chosen to dedicate part of their time and effort toward. Rather, if physique change is something you desire, perhaps you can learn from and be inspired by them.

I talked to a couple of friends who have accomplished great things with their bodies and (mostly) stayed sane during the process. It did involve some learning and road bumps, however.

Liz Benda – International Federation of Bodybuilding Pro
Liz Benda, 42, regularly competes in the “bikini class,” which she described as “the least muscular and least lean” of the various competitive classes. Years ago, she saw a friend do it and thought she looked amazing and decided to give it a try. “I had no idea what I was getting myself into,” she told me.

Her reasons were based on a desire to get on stage. “I don’t sing or dance, but as a kid I did ballet and have always been a bit of a ham hidden inside a shy person.” But when you’re on that stage, it’s not a lot of fun. “It’s a stressful 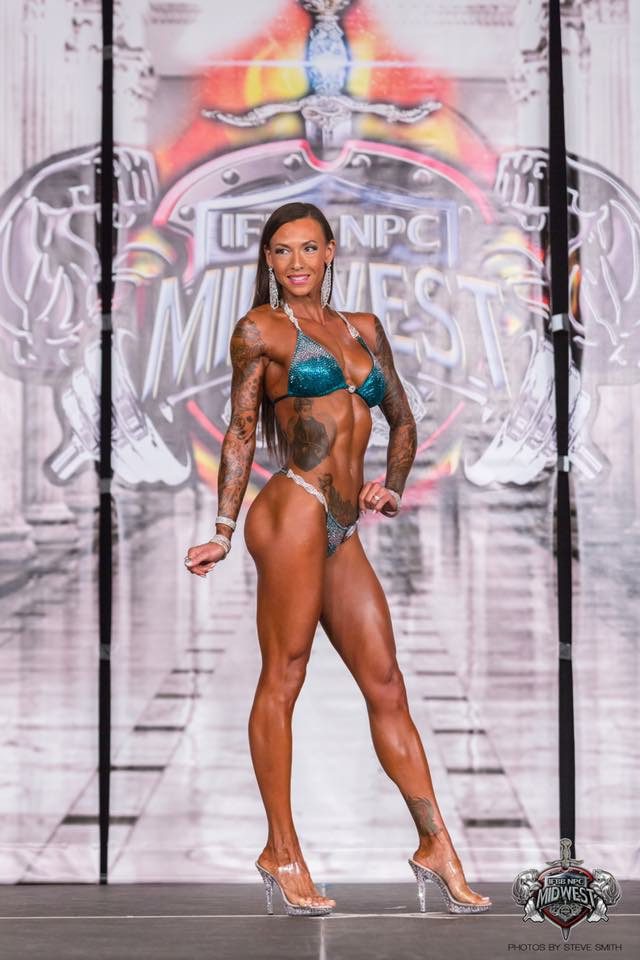 event because you feel the worst you could feel but you look amazing. You’re tired, you’re hungry, you’re over it.” Liz has done 10 amateur and eight pro shows. And at first, her approach to getting stage ready was less than wise.

“My first few competitions, I didn’t know anything about dieting for them. I had an old school dieting coach that had me eliminating a lot of foods.” She said these eliminations were not based in science. And the intense restriction she could only handle for a few days, followed by a Krispy Kreme binge. “My weight would go up and down.” And she would gain a lot of weight in the off season. It was becoming more and more of a challenge to lose weight for a show because she’d gained too much after the previous show.

Over time, however, she evolved toward a more rational eating strategy.

“I don’t restrict any food items now. It’s more macronutrient and calorie focused.” She said she doesn’t have binges anymore because still being allowed to have treats prevents cravings. And she doesn’t have to hyper measure, either, due to being practiced. “After a while I just knew the calories. I can eyeball it.”

Liz says she loves food and loves going out for dinner, as well as enjoys cooking and baking. (I’ve had some of her baked treats—they’re yummy!) She says she’s “Pretty yeah whatever” about a lot of things in her diet, including alcohol.

And it’s not just about looks. Liz enjoys having a body that performs well. Here she is giving me a piggy back ride.

Because Liz changed to a more rational approach, she doesn’t gain much weight in the off season any longer, staying lean year-round. Rather than restrict calories too much as she prepares for a show, she prefers to add in a bit of aerobic exercise to her lifting regimen to up her daily burn.

She says it boils down to knowing what you can handle and what you’re willing to do. To pursue something like this, you have to believe it’s worth it and believe you’re capable of doing it. Otherwise, you’re going to have a bad time.

Aric Sudicky, MD
Dr. Sudicky, age 34, just finished his family medicine residency. I am married to a woman who survived such a residency. It is … not fun.

“There were brutal rotations,” Aric said.

Aric used to be a trainer and fitness model who lived in the gym. Ironically, he says, “my physique has gotten better” since going through medical school and residency. Part of that is because of how his motivators have changed. 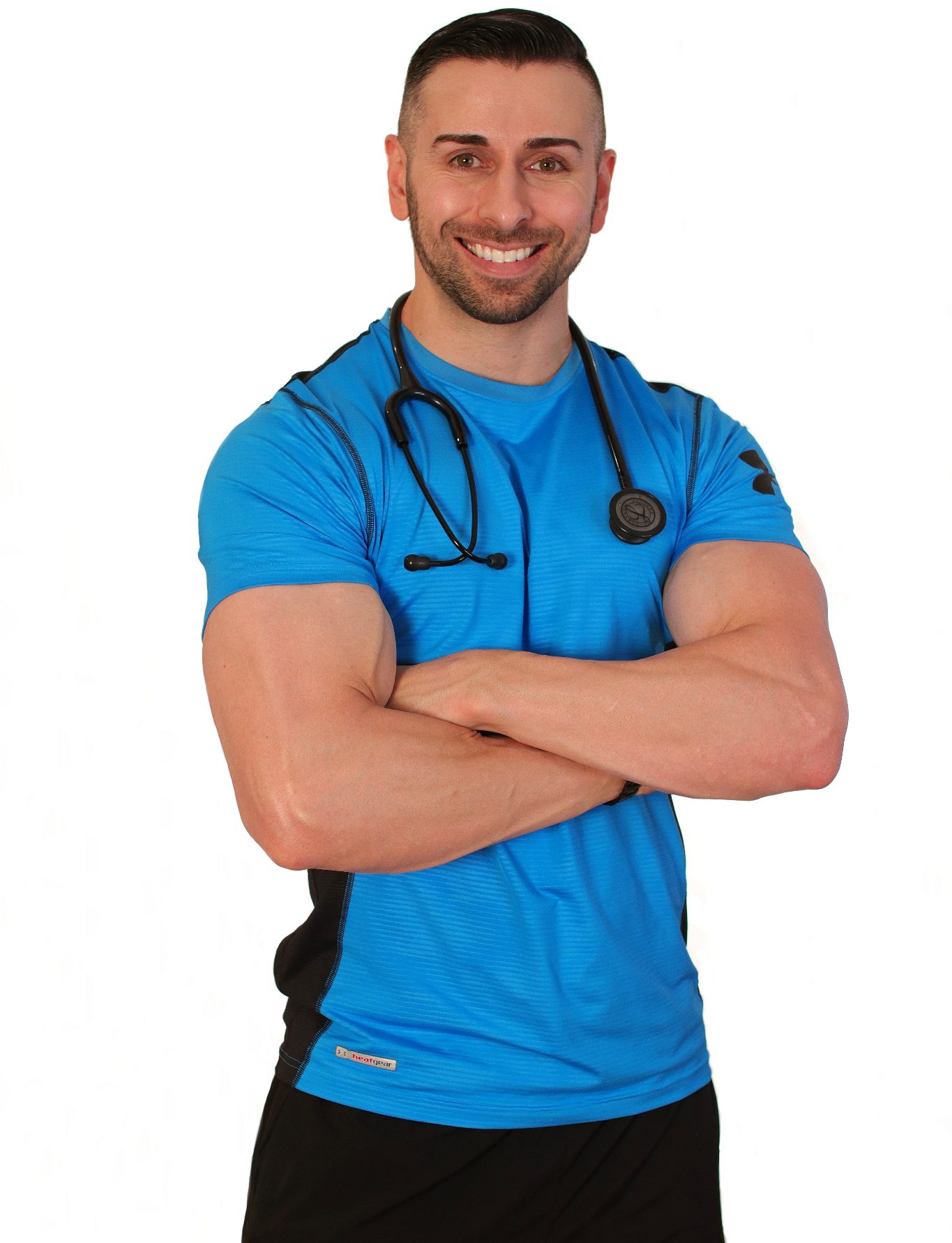 “Ten years ago I was putting food on the table by being a pro fitness model,” Dr. Sudicky said. “I couldn’t help but part of my training be focused on esthetics. Through five years of medical training now my focus is on reducing my risk of things like cancer and diabetes and heart disease. Esthetics is far less important these days than preventative medicine is.”

So … how did his physique improve because of this?

“As a fitness model the one thing I never had time for was to grow muscle because I always had to stay very lean. But now I’ve been able to increase my calories just a little and able to grow five or so pounds of lean mass in the last five years. My energy level is higher as well.”

To live a very fit and lean lifestyle, Aric recommends that the first thing is to find your reasons for doing it. “If exercise and eating healthfully is just as important in your life as anything else, you’re going to find time to do it.”

Because he was staying fit and eating well while in residency, he had to be highly organized.

“In residency, every minute matters, so I had to have every meal prepped in the fridge or freezer. I’m proud to say I’ve never once consumed a single meal made inside a hospital.” Like what Liz said, practice is what made it easy. He became a master of quickly putting together his meals to take on shift. It’s just something you get used to and it becomes fast and automatic rather than an endless chore.

“If you find your reason to do it, it doesn’t feel as painful. Whether it’s to be fit and healthy for your family or to live longer, you may not see it as a chore. I don’t feel bitter about the process. I quite enjoy it. You have to find a way to make yourself happy doing it.”

My recommendation is to live the life you want and let others live theirs free of judgement. If having a fitness model like physique is your desire, know it can be done via living a life you love, rather than one you hate.

Photo credit of Aric in feature image is Harry Leonard.