Hoarding Toilet Paper is the Least of Our Worries I know COVID-19 is not one of those poop-yourself-inside-out kind of diseases, but despite the lack of getting the runs, I understand the run on toilet paper: You can’t wipe your ass with a can of lima beans, and no one wants to be quarantined with a bunch of people with nasty butts.

No one wants to be quarantined, period. We want to live our lives. A concert I was looking forward to is cancelled. My friend’s trip to Paris next month isn’t happening. It’s my 25th wedding anniversary this spring and we were taking the family to Maui, but that is cancelled. The condo has been fully paid for and we may not get that back. Our retirement savings took a major hit.

But for others, it is so very much worse.

Our only concern is the virus. We won’t go hungry. We won’t lose our homes. Our investment portfolio will recover.

Travel, events, school, and public gatherings are being cancelled. A friend who works in a theatre has been laid off. Public speakers are seeing their gigs they worked hard to secure get cancelled. Struggling musicians have nowhere to play. Those who earn income from sporting events will struggle. People will stop going to restaurants and bars and the servers who rely on their tips will lose their income. Personal trainers and massage therapists and even dog walkers and sex workers face client cancellations. With the closing of schools, people without alternative childcare will be put in a terrible spot.

And on and on.

Due to underlying conditions, my family is at higher risk from this virus. And so, I’m very supportive of extreme measures being 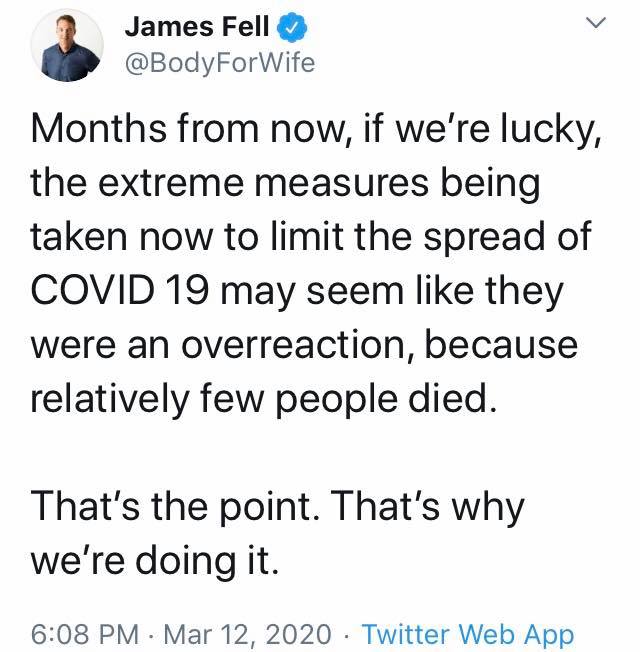 taken to limit / slow it’s spread (read about “flattening the curve”). Economically, we can survive those restrictions.

I’ve seen people downplay the threat of this virus on social media. Some of this may be out of ignorance of the dire threat we face, but it is also due to people who are concerned over how these measures are going to “tank the economy.”

But we are talking about millions of potential deaths from this virus. It’s not a fucking drill. It’s not an overreaction. We have already seen that countries where severe restrictions were quickly put in place that the infection and death rates have gone down, whereas those countries slow to act are paying the price.

The restrictions must be put in place. You can debate that, and you’ll be wrong. It will suck, but it must be done, because the alternative is so much worse.

And yes, as I’ve made clear, I make these statements from a position of immense privilege. My only concern is the virus, so of course I want it contained, despite how it will financially devastate many. I’m not sure I can truly be objective on this, but I’m looking at it from the perspective of a lesser evil, because economies can recover. The dead cannot. And yet, I know that I deserve every accusation of “That’s easy for you to say.”

So we must help one another, and push our governments to help those who need it most.

The social order in many countries is shit. It’s an attitude of “Fuck ‘em. I got mine” or even engaging in egregious acts of plague profiteering. For the short term, many will only get through this because of community action. Making sure others who need it have enough to eat and have childcare so they can work and pay the bills.

My friend Carolina Belmares made a Facebook post recently that brought to my attention something I had not considered: how this crisis will lead to a rise in domestic abuse. She wrote “children and women who suffer from domestic violence are facing their worst form of hell: days on end in close quarters with their abuser(s).”

She explained how this becomes compounded when you add economic anxiety into the mix, and implored people to understand that “We are the village.” We need to be there for each other. 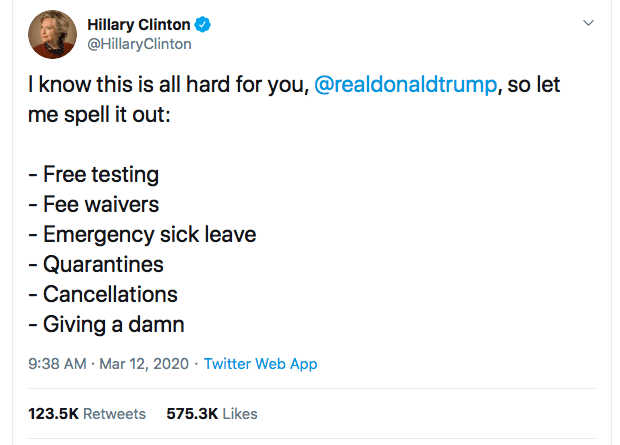 Because for many, the government just fucking isn’t.

The economic situation for many is having to work long hours just to stay alive and in poverty. When that gets disrupted at this level, people go hungry. They lose their homes. They die, but not from the disease. They die because there was no safety net. They die because the governments we voted in didn’t care about them. They cared only for the rich and making them richer.

In the near term, all we have is each other, but in the longer term, we must hold leaders who fail us accountable. We must use our votes wisely to demand that they do their fucking jobs and look after all citizens.

A day of prayer won’t cut it.

My book THE HOLY SH!T MOMENT, is now available. GET IT HERE!