Hey, Kevin Spacey, I Fixed that Shitty Apology for You 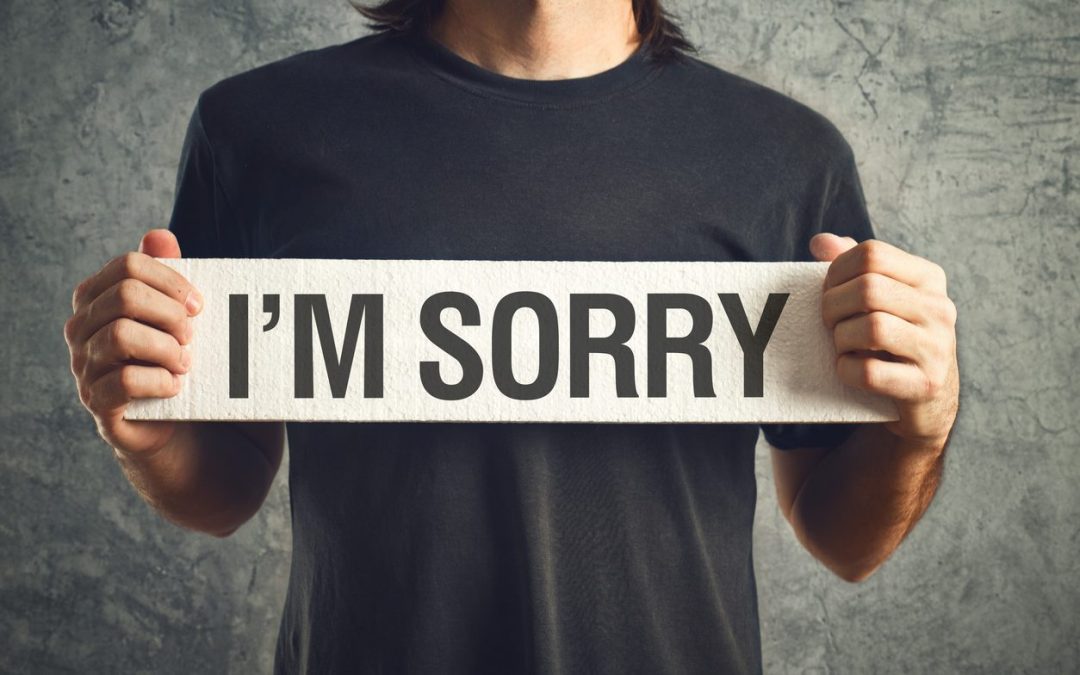 It started off okay, then Kevin fucked it up.

In the second paragraph, instead of driving home the apology, he deflected.

For those who don’t know what this is about, actor Anthony Rapp, who plays Lt. Stamets on Star Trek: Discovery, accused Spacey of sexual assault. From BuzzFeed:

Rapp is publicly alleging for the first time that in 1986, Spacey befriended Rapp while they both performed on Broadway shows, invited Rapp over to his apartment for a party, and, at the end of the night, picked Rapp up, placed him on his bed, and climbed on top of him, making a sexual advance. According to public records, Spacey was 26. Rapp was 14.

Rapp describes being invited out to a nightclub by Spacey at the age of 14 (when he said he looked younger than 14), and taken into a VIP area with him. Spacey then invited Rapp to a party at his apartment a few days later.

But Rapp was the only child at the party, and he didn’t know anyone. He went into the bedroom to watch TV.

More from the article:

“My memory was that I thought, Oh, everybody’s gone. Well, yeah, I should probably go home,” Rapp said. Spacey, he recalled, “sort of stood in the doorway, kind of swaying. My impression when he came in the room was that he was drunk.” Rapp doesn’t remember Spacey saying anything to him. Instead, Rapp said, “He picked me up like a groom picks up the bride over the threshold. But I don’t, like, squirm away initially, because I’m like, ‘What’s going on?’ And then he lays down on top of me.”

“He was trying to seduce me,” Rapp said. “I don’t know if I would have used that language. But I was aware that he was trying to get with me sexually.”

Rapp said he had to struggle to get away from Spacey. Also from the article:

Seeing Spacey now, “My stomach churns,” Rapp said. “I still to this day can’t wrap my head around so many aspects of it. It’s just deeply confusing to me.”

And you can see Spacey’s tweet below in response: 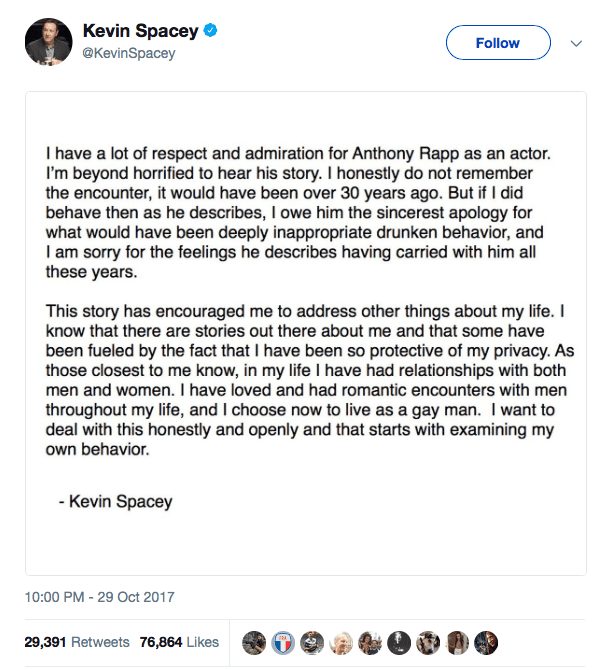 What we have here is a 26-year-old man who, when sober, invited at young-looking 14-year-old BOY to a night club, and used his connections to get him in the door. Then he invited him to a party at his apartment where there were no other children.

Over 30 years later, Rapp’s “stomach churns” when he sees Spacey. The article attests Rapp has gone public with his story, finally, because of the allegations against Weinstein, “to try to shine another light on the decades of behavior that have been allowed to continue because many people, including myself, being silent.”

Rapp’s tale paints a picture of Spacey being inappropriately interested in a 14-year-old. This isn’t the kind of thing you can blame on “drunken behavior.” And it’s not anything to conflate with coming out as gay, either.

The article is lengthy and provides great detail of how Rapp was fearful of Spacey over the years, and told many people of the assault in 1995, which is confirmed by Rapp’s brother. Rapp also said he has shared the story with close friends over the years. There is one other allegation against Spacey on Twitter by journalist Heather Unruh, but it’s hearsay with no details.

If we give Spacey the benefit of the doubt regarding not remembering what happened; if we accept that this was a solitary event, then here is my idea of what Spacey’s apology should have looked like. I keep only the first three sentences:

I have a lot of respect and admiration for Anthony Rapp as an actor. I’m beyond horrified to hear his story. I honestly do not remember the encounter.

But, reading what Anthony described, the description of how, after all this time, seeing me makes his stomach churn, I cannot help but believe him. To hold such a story of childhood trauma inside for over thirty years, and bravely come forward now … this isn’t something that happens when someone is being false. It is also supported by him telling this story to others over the years. I may not remember it, but under these circumstances, I can’t deny it. It must have happened as Anthony says. Me being drunk is no excuse at all.

And so, I wish to offer Anthony my sincerest apology. I am deeply sorry. Anything I can do to make amends, I will. This is causing me to re-evaluate my life and my choices.

You’ll note there is no mention of being gay or coming out in this version. These are things that have NOTHING to do with the molestation of a 14-year-old boy. It also ditches the wishy washy “maybe it happened” crap. If you read the entire BuzzFeed article, it seems pretty clear Spacey did something horrible.

Kevin, if a PR person helped you craft that apology, you need to fire them.