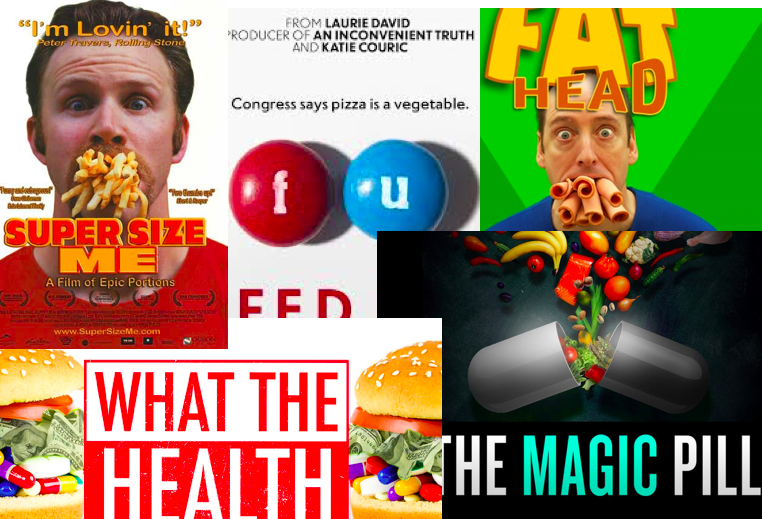 Moron: “But have you seen What the Health?”

Because of Netflix, you get to binge Jessica Jones doing strange things to a black mirror instead of going outside where there are lots of insects and people. And, according to those Zeitgeist movies on the network, people who are actually insects.

Netflix is awesome for not engaging with the world. It has some wonderful fiction programming. Unfortunately, the majority of their food documentaries also qualify as fiction, but they’re not sold as such.

This list isn’t exhaustive. And not all the documentaries qualify as truly “dumbfuck.” But there’s enough food documentary dumbfuckery on Netflix to justify the title I used.

Cowspiracy
Militant vegan propaganda pushing an abolitionist approach to consuming all meat products or the world is going to explode and it’s going to be all your fault, you filthy carnivore.

Farmageddon
Oh, look. A bunch of pro-organic appeal to nature raw milk cured my son’s allergies bullshit. Speaking of bullshit, organic is nothing more than a marketing gimmick. Yes, it DOES use pesticides and “natural” is a bullshit word causing mass death.

But don’t trust what the Center for Disease Control has to say about the dangers of raw milk, believe hippies who say it’s miracle disease curing moo juice.

Fat, Sick, and Nearly Dead
Okay, I get it. Having significant obesity and associated health problems, then making the commitment to losing weight to alleviate these conditions is a challenging endeavor, so let’s do it in the most dumbfuck way possible!

I wrote an entire science-based book on wise ways to lose weight, and this approach ain’t it. How did Joe Cross lose weight? Fucking juice. A 60-day juice fast. Where to start with the stupidity? First off, not eating for two months is what we call a dumbass crash diet of extreme unsustainability. Joe managed it, but he’s got a lot of money put into a documentary to sustain him. That’s why he’s an outlier. Secondly, juice is basically sugar water. It removes all the wholesome goodness of fruits and vegetables and is little better than drinking Coke.

Despite being one of the dumbest movies on the list, he made a sequel. Juliet. Foxtrot. Charlie.

Fat Head
The creator of this film did it as a counter to Super Size Me (also on this list). And it just goes to show that the answer to one dumbfuck film is not to go all the way to the other end of the spectrum of dumbfuckery. It’s like saying the answer to Breitbart is Occupy Democrats.

Except in this case, it goes from all fast food is dripping in saturated fat and is totally going to kill you and over to conspiracy theory nonsense about how decades of research into the dangers of a high fat diet is all bullshit because reasons. Militant low carbers are just as annoying as militant vegans, FYI.

Fed Up
Sugar is the new cigarettes, or some such bullshit.

Yeah, added sugar is a problem, but such fear-mongering schlock is how you get deranged food cultists that have an unhealthy relationship with food. Calm the fuck down.

Food Inc.
Organic is a marketing gimmick, and this film is part of its advertising strategy.

Just FYI, if the world went organic, about 5 billion people would starve to death.

Food Matters
No diet cures cancer. I mean, the movie advocates Gerson Therapy. Fucking Gerson Therapy, because blasting coffee up your ass is the cure for cancer. This, in short, is a movie that can kill people. Fuck everyone associated with it. Read my piece about bullshit cancer cures.

Forks Over Knives
A subtler version of vegan propaganda. Not complete dogshit, but canine feces is definitely present.

Global Waste
Yeah, wasting food is bad, but it perpetuates the idea that the solution to feeding poorer nations is to send them our leftovers. This is a popular gambit in the anti-GMO crowd.

I repeat: “Natural” is a bullshit word causing mass death.

Hungry for Change
Chemical phobia (everything is a chemical, dumbasses) mixed with sugar fear mongering (“It’s not fat that makes you fat, it’s sugar that makes you fat”). MSG and Aspartame and corn syrup, oh my! Oh, and sugar is totes addictive. Even more than cocaine.

In Defense of Food
Okay, the advice of “Eat food. Mostly plants. Not too much.” is pretty solid. But Michael Pollan is known for pushing a pro-organic agenda and having a less-than-stellar reputation for journalistic integrity.

Magic pill
Keto is the dumbfuck diet du jour, but according to this dumbfuck film, it’s a “magic pill.” Also, wheat is in everything and is killing you. Never mind gun control, we need bread control!

PlantPure Nation
Americans are fat so we’re gonna ‘Murica the shit out of this by putting the flag and the Statue of Liberty on the poster for this movie and say that plants are the cure for everything and by the way we have a website with the same name as this movie where you can buy lots of stuff cuz we based this on that China Study stuff but we still want to be all capitalist and shit.

Oh, and of course it launched in theatres on July 4.

Supersize Me
Oh, look. It’s the movie that helps start all this nonsense. Sort of a patient zero of food documentary dumbfuckery. Morgan Spurlock ate nothing but McDonald’s for a month and he got fat and his health markers went to absolute shit … except that while regular imbibing at Mcdonald’s isn’t exactly a great idea, when people dug beneath the surface of Spurlock’s claims to run the numbers, it didn’t add up. Is it possible that he lied? Sort of like he lied about being a decent human when he was actually a serial sexual harasser and rapist?

Sustainable
Technology and efficiency are bad, and we need to do shit like we did in the old days and organic is totally not a marketing gimmick and billions won’t starve if we all go organic because Rodale said so.

That Sugar Film
Another of those N1 experiments that are about as science-based as Tim Ferris’s 4-Hour Body.

The filmmaker gains fat, gets pimples, gets sick, is moody and lethargic. I mean, he might as well just kill himself before the sugar does. SUGAR IS EVIL OMG!

Actual evidence for these claims? Bah. Who needs it? Instead, listen to these “experts” with dubious “credentials” who agree with my outlandish claims.

What the health?
“The Health Film That Health Organizations Don’t Want You To See.” Because science is bullshit and real experts have nothing on us, the makers of Cowspiracy. Eggs are as bad as cigarettes. Meat is cancer. Milk is … also cancer. Go vegan or die!

Sensationalistic extremism is what sells, folks. You’ll likely not find much in the way of balanced, science-based advice in a food documentary. Netflix is about entertainment, not education. Learn the difference and watch Glow or Queer Eye instead.

James S. Fell, MA, MBA, has bylines in the Los Angeles Times, Chicago Tribune, the Guardian, TIME Magazine, and many other publications. His blog is read by millions and he is the author of two books: The Holy Sh!t Moment: How Lasting Change Can Happen in an Instant (St. Martin’s Press, 2019), and Lose it Right: A Brutally Honest 3-Stage Program to Help You Get Fit and Lose Weight Without Losing Your Mind (Random House Canada, 2014). Order them here.