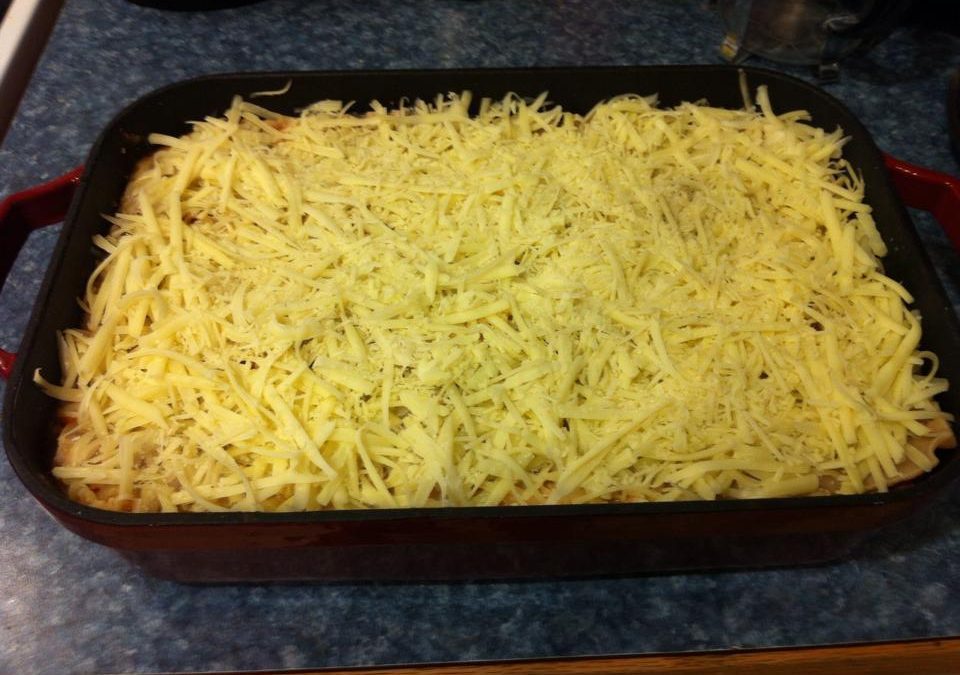 I get my sauce from a jar. Yours is made from scratch. Mine is better, because the taste isn’t tainted with sanctimonious douchebaggery.

“Oh, you get your sauce from a jar? Wow, I can’t believe you don’t make it from scratch. I always—”

Yes, I get my sauce from a fucking jar, and my lasagna is still delicious. I got shit to do, so I cut some corners. Go make your sauce from scratch up there on your high horse while you try to make others feel like lesser humans for getting it out of jars. Eat some fucking dark chocolate while you’re at it, you holier-than-thou ass monkey.

You want some fancy vegetarian gluten free eggplant lasagna recipe? You go away from here. This is some basic shit. Basically fucking tasty and doesn’t take all fucking day. And I make a shit-ton. Cuz leftovers. Or cuz having lots-of-people-overs. Bring booze.

About the Sauce
My turn to sauce shame: Just say no to Ragu. Prego isn’t much better.

I prefer Classico. I like the four cheese one, but pick whichever variety strikes your fancy. Except for this one. 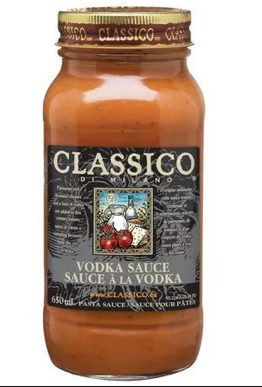 “Vodka Sauce”? What the fucking fuck? Why in the name of Charles Manson’s dingleberries would you make a pasta sauce with vodka? Vodka flavored lasagna? Barf and puke and retch.

I’m having a flashback to being 17 and drinking an entire bottle of the shit straight. Later that night I barfed up my toenails. No hyperbole. It took three months for those toenails to grow back.

*Prays for death in Canadian*

It was horrid. I pulled muscles. I cried. My sister laughed at me. I didn’t speak to her for a month, and only partially because that’s how long it took my vocal cords to grow back.

Ingredients to Make a Metric Shit-ton of Epic Lasagna

Spinach. Spinach is “missing,” because spinach in lasagna is dumber than invading Russia in pre-global warming era winter. “Oh, hey. Here’s a great idea. Let’s take this wonderful Italian dish and fucking ruin it by putting in a layer of green shit that’s going to turn to slime and taste bitter as all fuck.”

Fuck you and your damn spinach. No spinach.

While you’re at the store, buy one of those fucking pre-made loaves of garlic bread. I love that shit.

Preparation
You’re going to need a big-ass frying pan, preferably one with a lid.

Putting It Together
No one likes burnt fingers, so do this thing. What thing? Don’t just dump the noodles into a colander. Instead, drain the hot water out of the pot and add in cold water and let sit for a few minutes. Otherwise: hot noodles = ouchie fingers.

This is only two-layer lasagna. Why? Because you don’t need three, so stop layer shaming. Two thick layers are good. So, remember your noodle math and make sure you boiled the right amount.

Put down a layer of the beef-sauce-vegetable goop on the bottom of the pan. Use half of it. Duh.

With a spatula, add a smooth layer of all of the Ricotta-egg mix. Sprinkle on about one-quarter of the mozza, because why the fuck not?

Add a layer of noodles.

Add other half of beef-sauce-veggie goop.

Cover with some tin foil, not too tight.

Bake at 425 for 40 minutes. Remove foil. Bake another 20 minutes. Don’t forget to throw that garlic bread in there for the last 10. Let sit for 5 minutes.

Serves: More friends than you got.

Important! Make sure you have a deep enough baking pan. Because if that shit boils over you’re gonna set off every motherfucking smoke alarm in the house, and smoked lasagna is not nearly as good as smoked salmon. If you do not have a deep enough pan, then be sure to bitch about your lack of a deep pan every time your best friend is in proximity. Then, one day, if that friend is actually a good friend, he (or she) will get you the motherfucker of all lasagna pans. We’re talking cast iron club a full-grown seal to death with this bad boy. Hell, you could club Heidi’s ex-husband Seal to death with it.

This is where shit gets weird.

I have no idea why this happens, but it has been agreed upon by many that it is so.

I’ve made these lasagnas in advance, and rather than baking them I’ve covered them and put them in the freezer for a couple of weeks, then thawed them out and baked as usual.

And it’s better. I have no idea why. There’s some weird lasagna-freezer Twilight Zone shit going on in there.

I mean, the unfrozen is still pretty awesome; so one idea is to use two smaller pans, make some for tonight, and freeze the other pan for another night so you can see for yourself.

To get more recipes and other cool shit subscribe at www.Patreon.com/JamesFell.