Dr. Mark Hyman’s Journey Toward the Dark Side Is Now Complete 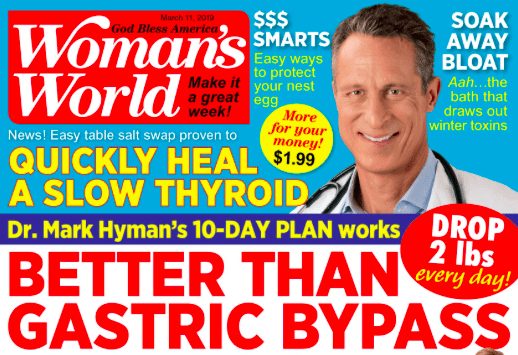 Did anyone else hear a flock of ducks go by?

When you sell sugar as the dietary boogeyman, you sell books. Lots of books. Dr. Mark Hyman has hit #1 on the New York Timesbestseller list a whopping ten times with his various writings. It’s because anti-sugar cultists eat that shit up as a side dish to their ridiculous very high fat diets.

And like a certain politician, Hyman can spew alternative facts and his followers accept it as gospel. In 2017 my friend Yvette d’Entremont wrote a piece exposing how Hyman uses research to “bolster” his anti-sugar claims, but when you actually look at said research, she discovered it says exactly the opposite of what Hyman claims.

A book could be written about the bullshit claims Hyman makes. Anyone who understands just how full of shit the weight loss industry is can tell via a quick look at the product page on Dr. Hyman’s site that this is not someone who should be trusted. It’s all detox this and metabolism booster that and weight loss supplement other things.

Hyman is the Director of Functional Medicine for the Cleveland Clinic, which proclaims to be “one of the largest and most respected hospitals in the country.” And yet, the clinic has been exposed for its frequent embracing of alternative (*cough*bullshit! *cough*) medicine.

Hyman has lambasted things such as caramel color, saying they cause cancer, while selling supplements that contain caramel color.

He has been accused of mangling autism science, blaming it on a toxic environment and using it to push his detox protocols.

He has fear-mongered over fluoride.

He has referred to conventional medicine as obsolete and on par with bloodletting. He rejects the germ theory of disease.

He has even suggested that vaccines cause autism.

It seems Mark went full Darth Hyman long ago. And I suppose he did; perhaps this isn’t a “new low.” But it’s definitely one of those things you look at and say, “What the fucking fuck?”

Nine years ago, I was published by the Los Angeles Times for the first time. It was this piece, about the utter bullshit that is every page of that toilet paper masking as a publication titled Women’s World Magazine.

A quote from my article:

the primary headline read: “The Juice That Melts Belly Fat! Drink Two Glasses a Day — and Lose 9 Lbs. and 3″ in a Week!” Lose 9 pounds in one week? Is the juice made out of tapeworms?

And in the ensuing decade, the rag has gotten only worse at math. Now the covers frequently proclaim a physiologically impossible loss of two pounds per day or more.

Perhaps not “impossible,” but close enough to it. Let’s break it down.

The more a person weighs, the faster they can lose weight, so let’s use a heavier example. A 40-year-old woman weighing 400 pounds would burn approximately 3,000 calories a day being sedentary. If she ran a marathon that day, she’d probably be at around 7,000 calories total burn for the day. So, with a pound of fat being 3,500 calories, if she consumed nothing but water, and ran a full marathon, this 400-pound woman could burn off two pounds of fat in a day.

That isn’t remotely realistic for even a single day, let alone sustainable.

As I wrote here, even losing a pound a day is highly unrealistic. If you want to read some science on how fast you should lose weight, read my piece here.

But as the feature photo shows, Dr. Hyman isn’t just on the cover of Women’s World, he’s proudly sharing it on Twitter. And it’s not some confusion, because he shared the cover that said his “10 DAY PLAY works BETTER THAN GASTRIC BYPASS.”

FYI, when it comes to sustainable weigh loss for those with significant obesity, nothing works better than a gastric bypass.

My friend Dr. Yoni Freedhoff has long been a critic of Dr. Hyman. I asked him for his thoughts on Hyman’s sharing of the cover photo. This was his reply:

While it’s true that physician authors ultimately have no control over how stories are written or publicized, that Dr. Hyman chose to promote a piece claiming his 10 day detox diet “works better than gastric bypass” speaks either to a lack of shame, knowledge, ethics, or some combination therein. Sadly though, it’s not surprising given this is the same man who sells a $300 detox kit on his web store (among many other expensive, dubious, products). That the Cleveland Clinic got in bed with him is a huge stain on their reputation and suggests that for them, profit trumps science, Hippocrates be damned.

With his sordid past, and this latest travesty, it appears quite clear than Hyman has been putting profit before patients for a long time.