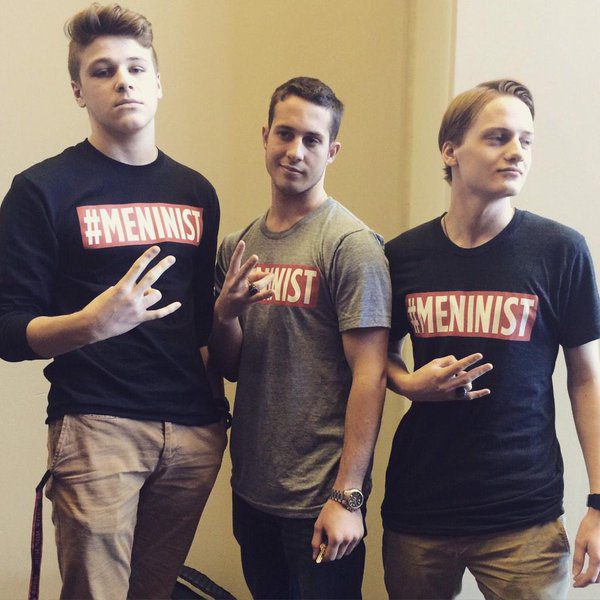 Some say, only douchebags use the word douchebag. But when making such an assertion, they’re using douchebag as an insult against those who say douchebag, perpetuating the usage at an additional level, creating doucheception.

Some words are problematic out of the gate; others have legitimate usage yet have been coopted. Take “holistic,” as an example. Sounds like an awesome word to describe an all-encompassing approach to … stuff. Except it’s been taken over by the woo-fuck-quackery crowd to sell anything from overpriced organic produce to bullshit cancer “cures.”

Is “douchebag” problematic? I can see why some believe it so. While it’s not in direct reference to a woman’s body, the word is “vagina adjacent.” There are two reasons I consider douchebag tolerable. Feel free to disagree.

The first is commonality of usage. A small minority are up in arms over words like “dumb” and “lame,” asserting they’re ableist. It’s extreme word policing by the fringe; I don’t fret over it. Likewise, with douchebag, the outcry is from a small number. All stripes use various derivations of “douche” in regular conversation; it rarely raises an eyebrow, unless “tard” is added as a suffix.

The other reason is the douche is a product with a sordid history; an example of capitalism at its most nefarious. Women were made to feel unclean via a vile marketing campaign, and the “solution” is a harmful product. A gynecologist at the Cleveland Clinic Women’s Health Institute wrote of douching: “Your vagina cleans itself, so avoid using a douche, which may actually harm vaginal health.”

So, using douchebag as a pejorative is putting the product in its proper negative perspective. It’s not insulting women or women’s body parts. Rather, it is insulting that which is harmful to women and their intimate body parts. In both the literal and metaphorical sense, douchebags should not be allowed near vaginas.

Perhaps you consider me a douchebag for that stretching of logic. That’s okay. I was getting warmed up. I’m about to enter the mind of the douche so I can relay to you what they’re thinking when they use these words and phrases. Behold!

Nice Guy
I’m a nice guy because I didn’t rape you. I’m being patient and pouring friendship into you until sex falls out. Why is it taking so long?

SJW (Social Justice Warrior)
There you go again, caring about people who aren’t white males. You don’t understand how persecuted we are. Fucking SJW.

Feminazi
My fellow men and I were being marched off to die in gas chambers when we thought this one up.

Incel
I’m celibate. But’s it not voluntary. It’s involuntary. I’m an involuntary celibate. And this is my made-up word to describe how frustrated I am the women of the world don’t realize they owe me sex.

Virtue Signaling
I know you don’t care about that cause. You’re just virtue signaling to make you feel superior. Also, true marriage is one man and one woman. Because Jesus.

Hypergamous
Women are sluts who sleep with lots of guys who aren’t me only because I don’t have a job or any redeeming qualities whatsoever.

Identity Politics
I don’t like it when policy discussions are about issues that aren’t all about me.

Token Resistance
She just doesn’t want you to think she’s a slut, even though she’s totally a slut. That’s why she keeps saying no. Keep pushing. She’ll give in. She totally gave in. It was token resistance. Did you see what she was wearing?

Pretty AND Smart
Big emphasis on “and.” Because it’s such an unusual combination. Like a talking dog.

White Knight
Look at you, being in support of equality. Loser.

Sapiosexual
Sez so right there on my Tinder profile. Means I can’t get hard until you do some calculus for me. It also means I’m, like, super-duper smart. Saying I’m sapiosexual is how I signal my smarts. Because I’d never date a woman smarter than me. (They don’t exist.)

Prepare to be mansplained to a lot, accompanied by a series of unsolicited dick pics.

Pussification
It’s all that political correctness preventing me from being a real man. I need to go buy an AR-15 so I can get my man card back.

Gynocentric
Men are the true oppressed!

Beta
Not me. I’m totes alpha. Not just an asshole. Alpha.

Cuck
I’m an incel but you’re worse because you care about women which means your wife sleeps with other men. Black men.

Mangina
Any man who advocates for women has a vagina. Duh.

Freedom of speech!
“Some people’s idea of [freedom of speech] is that they are free to say what they like, but if anyone says anything back, that is an outrage.” Who said that? Sounds like a bunch of beta cuck mangina bullshit. Sir Winston Whoville?

Let me tell you what Milo said …

All Lives Matter
And by “All” I mean “White.”

Black on Black Crime
I only care about this when someone complains about a cop shooting an unarmed black person. Again.

“Not all______”
I’ve never done it, so that means it doesn’t happen. I mean, I would do that if I thought I could get away with it. What’s a derailment? Won’t someone think of the men?

Reverse Racism
I haven’t suffered centuries of oppression, but someone called me cracker.

Kek
I’m not sure what this means except it indicates me as a gullible follower of the alt-Reich. Whatever it’s supposed to mean I can assure you it’s not important.

Sheeple
I mean, do your research.

Females
Chew my food for me, female. It’s not just an adjective, it’s a noun. You females need to learn your place, because I’m a man, and you’re all just a bunch of females. You’re merely a gender. Feeeeeemales.

Friend Zone
All the annoyance of having to associate with a female, with no access to any of her holes.

Meninist
Because feminism swung the pendulum too far the other way.

Triggered
Because I don’t have an intelligent comeback.

Echo Chamber
I was Just Asking Questions and those females need a safe space because I triggered their snowflakes and they banned me so now their page is an echo chamber.

Participation Trophy
It’s everything wrong with ‘Murica. You need to earn your keep. No free rides. Get a job. That guy who was born into mega millions is gonna make us great again.

Egalitarian
I’m not a feminist, I’m an egalitarian. Speaking of which, men are oppressed and need, like, way more power. Shit is totes gynocentric.

Bigly
What? It’s a word.