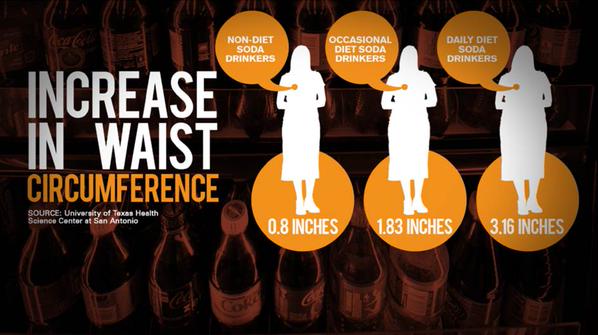 Google Analytics tells me most of you are Americans, and so I drop the extra “u” when I write stuff like, “The behavior of my neighbor wearing battle armor was humorous.”

But something about the word “soda” seems wrong. In Canada, we call it “pop.” Now that I think about it, calling it pop is pretty stupid. But to us, soda is club soda, which is basically carbonated water, or Coors Light, or something.

The study looked at older folks, and as they aged all of them got fatter, but the non-diet soda drinkers got less fatter. That bad grammar was purposeful. Either that or aspartame gave me an aneurysm. Over about a decade, non-diet soda drinkers gained less than an inch around the midsection, occasional drinkers gained almost two inches of waist blubber, and the daily drinkers? More than three inches of the dreaded belly fat.

I’ve been in this industry a while, and I know the term “belly fat” grabs people’s attention and leads to the creation of bestselling bullshittery in the form of books like the Belly Fat Diet and the Belly Melt Diet. The belly is one of those dreaded “trouble spots,” and, according to this study, diet soda will make your trouble spot even more troublesome.

Sky is falling and all that shit.

I was waiting to publish my post on this because I wanted to see what my friend Dr. Yoni Freedhoff had to say. I knew he’d write about it, and I was 99% sure I knew what he was going to conclude. I thought Yoni would say the study sucked, and I was right.

From his blog, which you should totally subscribe to:

If you’re going to conclude that diet soda consumption is linked to weight gain and increased abdominal circumference you’d damn well better control for diet as a whole given that diet beverage consumption may simply be a marker for people who eat more indulgent foods and think, erroneously, that choosing the diet pop with their mega combo will somehow protect their weights and waists, and because there is no known plausible mechanism for a direct link.

Then he said the fact that people even saw fit to publish this study was “mind boggling.” But hey, Food Babe has a book out. People will publish anything.

Speaking of publishing stuff, I wrote a book, and for that book I interviewed Purdue University Nutrition professor and registered dietitian Richard Mattes, who said of diet soda and weight gain: “It’s not a product of the artificial sweetener, it’s more of a cognitive effect. If you think that you’ve earned more food by drinking diet soda, it’s not going to work. You have to make a conscious effort to not go hog wild later on.”

So, basically what Yoni said.

Maybe the study title should have been entitled, “Study Shows People Don’t Understand How Calories Work.” Because people do drink diet soda then think it means they’re “being good” about their diet and therefore deserve some kind of indulgent reward. What’s more, diet soda isn’t exactly health food. I would argue that there is a mentality around its consumption where perhaps they are a little less health conscious. People who do decide to abstain from such drinks are, more than likely, more concerned with their nutritional intake as a whole. THAT is why they have smaller waistlines.

Occam’s friggin’ razor. Duh. There is no magical chemical reaction taking place where the aspartame opens a portal from a parallel universe and pulls adipose tissue into your midsection. The simplest, and in this case almost certainly correct, answer is that people who drink diet soda are more likely to have shitty diets.

I love me some Diet Coke. But I can see my abs. How is this possible? It’s because I know way more about nutrition than the average diet soda drinker, and understand that this does not mean I get to go “hog wild” on the “mega combo.”

People give me shit for my Diet Coke drinking, and yet never say a word about the fact that the “after” picture on this site and on my social media pages has me hoisting a giant mug of a Class 1 carcinogen.

Is aspartame good for you? Probably not, but all that sugar in regular soda is bad for a lot of reasons too. There isn’t a direct link between sugar consumption and type 2 diabetes, but high sugar intake often leads to higher levels of body fat, and that does increase the risk of T2D, along with a host of other ailments. It’s way worse than any potential problems posed by aspartame, which the alternative medicine crowd has blown way out of proportion.

I find it amazing that people will consume large quantities of unregulated and questionable supplements, yet complain about something that has been extensively tested for safety by multiple regulatory agencies.

The most common artificial sweeteners on the market (aspartame, sucralose) are classified as GRAS—Generally Recognized as Safe. The World Health Organization, the Scientific Committee on Food of the European Commission, the Joint Expert Committee of Food Additions of the United Nations Food and Agricultural Organization, and the United States Food and Drug Administration were all involved in granting this classification. The available data about the use of a substance must be known and widely accepted by qualified experts in order for it to receive the GRAS classification. There must be consensus that the substance is safe under the conditions of its intended use. Over 100 regulatory agencies around the world are cool with this stuff in moderate doses.1

I read that aspartame can increase the incidence of bladder cancer in male rats, though. Hmmm … scary stuff. Actually, if you look at the data, male rats are highly prone to bladder cancer in the first place—it’s almost like if you sneeze on the buggers they get it—and they received 100 times the amount any human would normally ingest.2

In conclusion, diet soda is safe, and isn’t going to make you fat all by itself. It’s the behaviors that can come with its consumption that will possibly lead to weight gain. Now that you know this, you can feel free to consume it without fear of it making your mitochondria have a meltdown or creating a rift in the space-time continuum of your torso thereby generating a gravitational pull of butter towards your belly.

But still, water is always your best choice when you’re thirsty.