Dad Sandals are the Fucking Best

It’s like you actually believe I give a shit about your fashion opinions.

I am a suburbia-living dad who loves cargo shorts. I draw the line at socks with sandals, but I will wear those dad sandals, because fuck flip flops.

I bought a pair of flip flops once. And I wore them, once.

Within ten minutes there was a hole worn into the skin between my big toe and the toe next to it on both feet. Flip flops are the most useless footwear ever created and I’d rather fire walk with Tony Fuckface Robbins than ever put those things on my feet again. You can barely walk properly in the stupid things, let alone run. They fall off easily, and there is that annoying tendency for that stupid post that goes between your toes to friction away your tender flesh, as I immediately discovered. Again: Fuck flip flops.

And fuck Crocs too. I never even tried those, because while I’m light years from being any kind of fashion maven, they are Trump’s scrotum level of ugly.

Some people think the dad sandals are equally ugly. I guess that’s a personal judgement call because I think they look fine. But it’s not about the looks. Like cargo shorts, it’s about the function.

See those sandals I’m wearing in the feature photo? Those are spite sandals. Well, not really, as I don’t advise doing anything in a marriage out of spite. But I did keep them for NINETEEN YEARS as a sort of “You were wrong, and I was right” kind of thing. When I first bought them (Timberland brand), we had a new baby (dad sandals!) and my wife gave me shit for spending $95 on what she saw as an extravagance. Those sandals traveled through ten countries on four continents, waded through lakes, rivers, and oceans, climbed slippery rocks, have been permeated with campfire smoke, and were once chewed on by a large dog.

There was lots of cliff diving too, in case the photo didn’t make that clear.

They’ve been stitched once (because of the dog) and the soles needed to be crazy-glued back into place a couple of times. But they were the most enduring and comfortable footwear I’ve ever had. Alas, it was time to let them go. When first purchased, they had amazing grip. I could walk over seaweed slick rocks and not slip. But over the decades, the grips wore away. To finally force myself to say goodbye, I left them in a garbage bin in a Las Vegas hotel room. It was a sad parting. I worried I’d never find another pair like them.

I spent a long time searching, and finally found a suitable replacement for $170 (Ecco brand—these ones). After almost two decades, the inflation seems about right. My wife gave me no grief over the price tag on these new sandals. I’ve won damn few arguments in our three decades together, but I won that one.

I can climb slippery rocks in these sandals. I can swim in them and jump off a 55-foot cliff and let them take the impact on my feet (that’s me on the left). I can 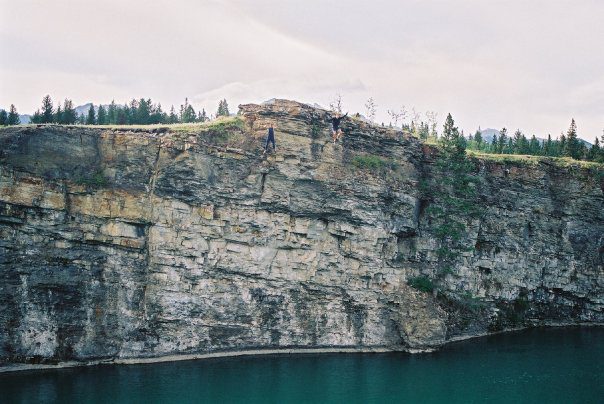 RUN in them almost as fast as if I was wearing running shoes. They don’t wear holes in between my toes or my heels or anywhere else, even if I wear them all day long.

I will wear my cargo shorts with my dad sandals and drink local craft beer while telling dad jokes and grilling my motherfucking cheeseburgers in my suburban backyard as I’m appreciating my lawn that’s so green it glows in the fucking dark.

And all will be right in my world, no matter how ugly you think my sandals are. Because it’s not about you. It’s about me, and my dad feet.