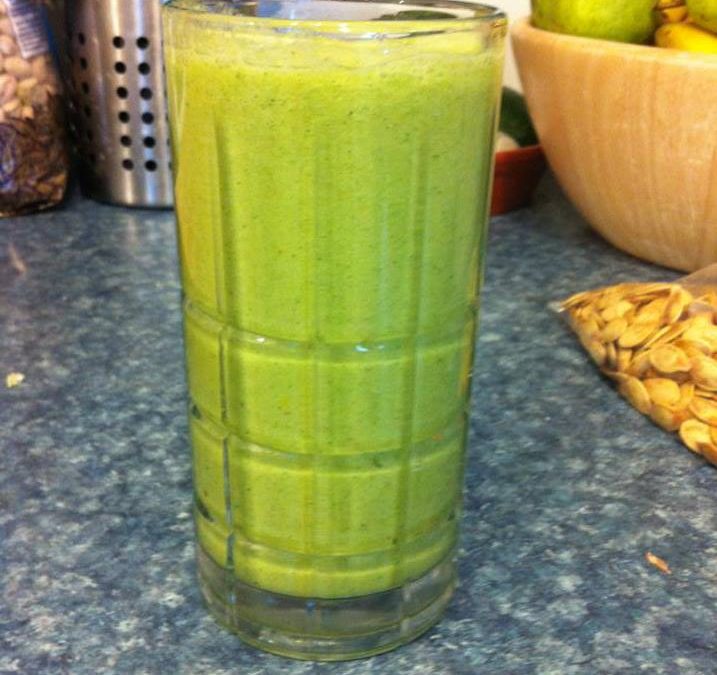 When I was a boy of about six, I crawled into my mother’s lap as she sat on the couch. We snuggled for a bit, her arms wrapped around me, then her hand felt something slimy.

The green vegetable mixture that had been on my dinner plate was oozing out of my pocket.

Dammit. I’d forgotten to flush it.

I always hated most vegetables and would secretly stuff them into my pocket at the dinner table then dispose of the evidence down the toilet afterwards.

In my motherfucking lasagna, I told you not to put spinach in it, because fuck that.

I don’t like green food. I have never liked it. And so, I’ve always struggled with my vegetable intake. This is about taking something unpleasant—consuming green stuff that is nonetheless good for you—and learning how to make it suck less.

This is NOT about using juice as a tool for “cleansing.” A piece on Slate.com exposed the folly of replacing food with hyper-expensive and over-processed vegetable juices as a tool to purge your body of, like, toxins, and stuff. Such thinking is unscientific hippie bullshit that can nonetheless get your crappy documentary on Netflix. Don’t do it. And if you really don’t mind selling your soul, you can even get a dumbfuck sequel to your stupid documentary.

This is just about getting more vegetables into you, and doing it the right way.

The why is YOU DON’T CONSUME ENOUGH VEGETABLES! Okay, maybe you do. If you’re constantly tasting the non-Skittles rainbow of brightly colored, high-nutrient, high-fiber stuff that grew out of the ground, then you’re good. Get outta here. Nothing in this piece for you.

But chances are, you need to drink this shit, because according to the Center for Disease Control, fewer than a quarter of Americans consume the recommended minimum of five servings of fruits and vegetables a day. The reason why is pretty simple: most of us think they’re yucky. This is an evolutionary response; our innate taste desires are pretty basic. We crave sugar, fat and salt because they all enhanced survival in a time when calories were in short supply. Kale and broccoli were low on the priority list if strawberries and mammoth steaks were on the menu.

But in a land o’ overriding sugar-fat-crap plenty, vegetables are now your friends. This piece isn’t about satiety and weight loss (because more chewing helps reduce food intake), it’s about health and longevity. And drinking vegetables is about hitting, and even beating, that daily vegetable target, without losing any of the good stuff or having your taste buds rebel like you just tried to choke down a non-alcoholic beer. As far as “cleansing” goes, feel free to have one of these vegetables drink replace a beer, a soda, or a sugary treat. You are now cleansed. Feel better?

There are myriad ways to fuck this up. I know, because I did. Read on, and learn from my mistakes.

But I did not fuck it up in the worst way—the way most people do. Pay close attention, because this is important enough for me to bold and go all caps commando:

DON’T YOU FUCKING JUICE IT. THAT’S A HEAP O’ DUMB, SON. YOU BLEND THIS SHIT!

Juicing is bullshit. Fuck going to juice bars, fucking buying expensive juices at the store because of alleged miracle ingredients, and fuck your stupid multi-level-marketing fuckery.

“Juicing” is bullshit. It is bullshit because it removes fiber and polyphenol phytonutrients and gives you a weak-ass glass of liquid calories that doesn’t satiate worth shit.

THIS IS ABOUT BLENDING, NOT JUICING. BIG FUCKING DIFFERENCE.

What’s the difference? Everything that goes in the blender, goes in your face.

Also, it’s thicker, or sludgier, or something, but you can choke that shit down, cuz healthy. And while chewing is removed, the calories in these are still pretty low and I have found them to be reasonably satiating. Not as satiating as eating  all those vegetables, but as we already established,I’m not going to eat those fucking vegetables. So, this is my compromise.

Perhaps it’s a compromise that will work for you.

But it may cost you a little. I used to do this with a 20-year-old Osterizer we got for a wedding present. It worked … not so well. I mean, it blended the stuff, more or less. But, chunks. The “liquify” setting on a cheap blender is a goddamn liar.

So, I got a Vitamix. This one. It ain’t cheap, but it gets the chunks out.

Now let me tell you what happened the first time I tried this.

I went to the grocery store and bought a ton of vegetables I rarely (and in some cases never) buy. The first time out, this is what went in:half a bell pepper, some grapes, asparagus, part of a beet, broccoli, kale, carrots, and some mixed greens that include spinach.

So, I crammed that all into my shitty old blender, added a couple of cups of water, and set the Osterizer to vaporize, and this is what I got. 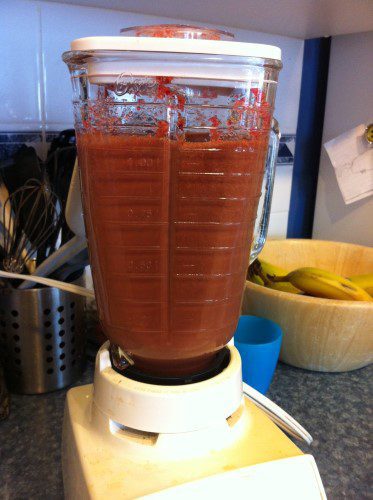 Holy hemorrhaging hippo hemorrhoids but that looks awful. Guess what? It tasted even worse than it looked. The beet was definitely a mistake. A lot of it was mistake. I still managed to choke it down through a sheer force of will, but my wife took one sip and said, “No way.” I don’t blame her, as it tasted like dog food that had been barfed up, eaten, then barfed up again.

I wrote about my woes, and received advice on Facebook, and then I began to experiment, and I learned. Here is what I put in mine now. I don’t cram it in all at once. It works better if you follow the blending intervals:

If you value harmony among your cohabitants, I recommend serving with Beano, because broccoli farts.

Anyway, it’s not bad. It’s not a milkshake, but it’s actually okay. My wife will even drink it, and you should too. When? Well, if you have a regular day job, I recommend doing it right when you get home from work, and then it can keep your stomach busy while you wait for dinner to be ready, so you don’t go snacking on something sugary or fatty.

Whenever you do it, just get that stuff in you. It may not make a lot of difference to how you feel right now, but a few decades from now it can make the difference between living vitally vs. in a hospital bed with tubes sticking into orifices.

So, there’s your choice of what to stick in your orifice: a veggie drink now or a plastic tube later.