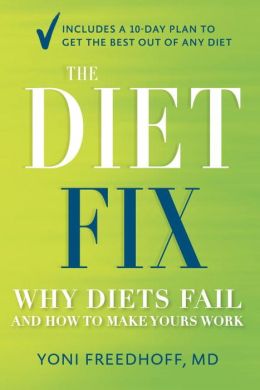 I don’t throw around the word “mentor” casually.

Yoni Freedhoff, MD, is one of my mentors. I don’t even like having mentors, because it forces me to admit I don’t know everything. And so, the people I put on the list of “James’s Mentors” is short indeed.

Just FYI, this is a review of Yoni’s new book, The Diet Fix.

But I’ve learned through the process of writing my own book that, especially in this field, the book is a reflection of the author. This is a crap-filled industry, where even good people are tempted to go to the dark side in order to make a buck. It’s gimmicks and scams that sell, and you must have an overriding quest for seeking truth and dispelling myths in order to resist the pressure to play the Weight Loss Inc. game and do the right thing instead. Not the right thing for one’s bank account, but for readers.

And so, this is not just a book review, but a review of the person behind the book. Before I talk about The Diet Fix, I want to talk about the author.

We first met via email. He sent me a short note to say that he “adored” my Bowflex article in the LA Times, which ran September 2010. I wasn’t sure how someone could adore an article, but go read it and maybe you too will find it worthy of adoration.

And that started an online friendship that lead to us eventually meeting in Banff, Alberta. I have hiked with Yoni and his lovely wife, and drank beer with them, so that makes the friendship official. We’ve shared many emails, phone calls, and I’ve interviewed him a number times for articles and he is quoted extensively in my book. He gets big kudos in the acknowledgements as well.

When it comes to weight loss, there is no one I trust more. Dr. David Katz ranks high as well, but I don’t personally know Dr. Katz that well.

But I do know Yoni, and he’s had great influence on me. He gave me a reality check about the role of exercise in weight loss. When I say that “burning calories is the least important thing exercise does” – that came from him. He also smartened me up in regards to fat shaming. I wasn’t exactly bad about it before, but he made me understand that there really is no place for it, and that if I cared about my readers I’d not only purge it from my writing, but do battle against it.

He also taught me a lot of other stuff. I read his blog almost every day. Let’s just wrap it up and say he’s awesome and then I can talk about his book.

My book comes out about a month after his, and I want you to buy both of them. They’re complimentary. Being a strategic thinker kind of guy with an MBA who does not have a degree in exercise physiology and is not a registered dietitian, I usually play to my own strengths and focus on the big picture. When it comes to the finer, scientific details of weight loss, I speak to experts (that’s why I have a co-author).

My book is big picture, and Yoni’s gets into tactical details. Like I said, they’re complimentary.

Dr. Freedhoff is founder of the Bariatric Medical Institute in Ottawa. He has been on the frontlines of weight management for years, dealing with challenging cases first hand, using an evidence-based approach and seeing what works and what does not. Years of study and direct knowledge are behind the creation of this book. There are few weight loss authors with his in-depth experience with real people. Think on that the next time you read an article by some keyboard commando who read some abstracts on PubMed and now thinks he’s knows everything there is to know about getting in shape.

Yoni’s life work went into this book. Being that he’s an MD, I expect he has the luxury of foregoing gimmicks like saying you should eat like a caveman, or based on your blood type, in order to sell books. I’m married to an MD, so that income gives me the same luxury in terms of writing a weight loss book that’s based in reality. A.K.A. A book with decreased sales potential.

I think Yoni’s book is going to be a bestseller anyway. Because it’s so refreshingly different from what else is available. I mean, not all that is published about weight loss is crap, but much of it is. Yoni’s book is the opposite of crap.

Wow. Over 700 words in and I’m finally ready to talk about the actual book. Can you say “man crush?”

The Diet Fix doesn’t ask you to suffer. That’s another thing I learned from Yoni: suffering is not an effective strategy. You can have your treats and eat them too because you can’t sustain a lifestyle you hate.

This book is for those who have tried other diets and failed. So, it’s for everyone.

Yoni gives a great history of the diet industry, examining the most popular approaches and why they fail. He created a list of “dieting’s seven deadly sins” that are Hunger, Sacrifice, Willpower, Blind Restriction, Sweat, Perfectionism and Denial. These are what many popular diets expect of you, and in most cases they don’t work. Well, I’ll admit I’m still a fan of the “sweat” one, but I give people plenty of time to get there, and teach them to sweat because they want to. Yoni rails against the mindset found on The Biggest Loser, which has “bonus points for puking.” I too am against exercise-induced vomiting.

He also looks at the 7 Deadly Trauma’s created by dieting: Guilt, Shame, Failure, Depression, Despair, Binge Eating and Weight Cycling. These are the things that put you on the yoyo, where weight is lost and regained time and again.

What follows is an exposé of many of the most popular diet myths, exposed via science and logic. The first third of this book is getting you ready to get started, and Freedhoff does that by getting you out of the dieting mindset. Think on the title: The Diet Fix. This book is a fix for all those popular/crazy/silly diets that people try, and in order to walk the proper path, it’s important to start from a place of understanding that these diets usually don’t work, and why.

And that takes you into Dr. Freedhoff’s program. The Diet Fix goes through a 10-day resetting process. This isn’t some lose 10 pounds in 10 days nonsense, but it’s more preparation for what is really to come.

So this review doesn’t seem like some giant love letter to Dr. Yoni Freedhoff, I’ll admit to having my reservations about the 10-day thing. There are different things he has you focus on each day in order to get into a healthy lifestyle mindset, and it is all excellent information, but placing it within the context of 10 days to change things didn’t work for me.

But I admit that this is personal. I’ve always been a fly-by-the-seat-of-your-pants kind of guy. I prefer winging it when it comes to a lot of things, and when it comes to sustainable weight loss and fitness, my approach is to seek out a Zen feeling, when you work on developing a sense of what is working over a period of months and even years, slowly doing the tortoise crawl towards what really is right for you. I’m fond of this approach because it was my own experience. In over 20 years of being a fit guy, I’ve only ever followed a detailed program twice, and they were both to make ambitious race times and only lasted a few months. The rest of the time, I’m doing what feels right.

My book does have a six-step program that can be done in as little as six months or as long as 18 months, but I give readers a lot of leeway to use it as a general guideline, picking and choosing what feels right for them.

I think this 10-day reset is targeted at tougher cases. I generally work with and write for folks who aren’t very overweight or obese, and not suffering from significant medical problems. My suspicion is that people who visit a place called the Bariatric Medical Institute are indeed tough cases, and more in need of firmer rules to follow to get them on the proper path. My “do what feels right” approach probably won’t work for them.

The second half of the book is where things get really awesome, and provide a lot of excellent tactical details and suggestions for how to live a life that leads to weighing less. This is where Yoni’s experience as an obesity doctor shines through, providing a breadth of tips and tricks that cover all the bases of weight loss and weight management.

Another recommendation of Yoni’s I’m not in favor of is the use of scales, but I know I’m against the grain on this one. Again, I have to find a couple of things to disagree with in this book or you’ll end up thinking I got paid to write it.

I know the research supports the use of scales, but I don’t like them. I think there are more important things to measure that can work just as well as measuring your weight, and perhaps even better. Yoni gives good advice about scales in The Diet Fix, teaching you how to use them properly. If you’re a scale type person, then make sure you follow that advice.

In regards to scales, it can be a trial and error thing. Try his approach, and if it works, great. If it doesn’t, there is also my approach. I like to transcend the scale, which goes along with my whole Zen thing of not caring what I weigh. I track miles run or cycled, weight lifted, and what I can see in the mirror. I also count fruits and vegetables consumed, beer drank, visits to fast food restaurants, and desserts eaten. By focusing on these types of numbers, I never need worry about a scale.

But Yoni and I are different people with different approaches. I’m a fitness guy, and I preach an exercise-focused lifestyle, and that’s something that takes months and years to adopt. To a degree, we work with somewhat different populations, although there is certainly overlap.

In the end, I learned a lot from reading this book, and I’ll probably steal some of his ideas when I write my next book. It’s not like I haven’t been stealing ideas from Yoni for years already.

Yes. Buy Yoni’s book, and read it. It’s great stuff. It comes out on March 4 and is available for pre-ordering. Here is a bunch of links to do so: