Beyond Meat: One Day, We Will All Be Vegan 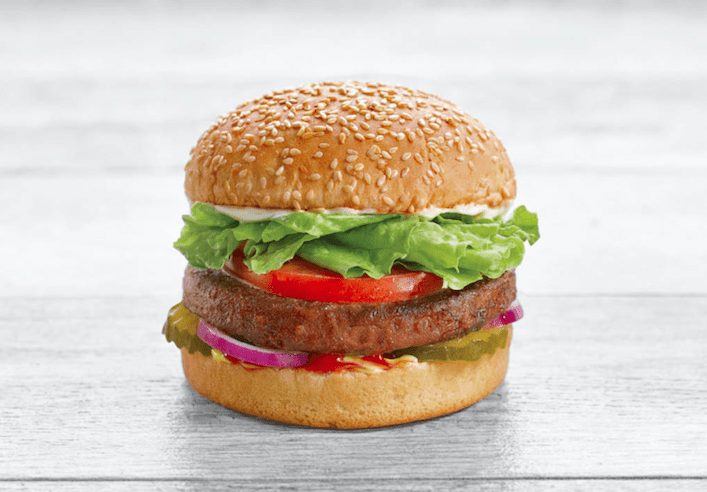 If you enjoy a good space opera full of funky aliens, interstellar warfare, and bumping uglies in zero g, Peter Hamilton is your man. Admittedly, he does tend to excrete the sheets with his endings, but the books are still great fun.

One book he particularly phoned in the ending on was titled Fallen Dragon.

It’s been a long time since I read it, but I recall that, upon visiting Earth, the hero of the novel hooked up with some hippie chick. They spent time hanging out together, steaming up the bedroom, and taking breaks for her to refuel him for more sex sessions. When he learned that the meals she prepared contained the flesh of dead animals, he was most upset.

In this future, eating animals for sustenance was a thing of the past. It was considered icky.

Yesterday I drove seven hours with four teenagers in the vehicle. Two of said teenagers are my offspring, and therefore highly obnoxious. After arriving at our destination, I was in no mood to cook. We went to A&W.

McDonald’s, Burger King, Wendy’s … Never been much of a fan of their burgers. I finally had In-N-Out a few months ago in Vegas and found they tasted a lot like the A&W Teen Burger, which of the main fast food burger joints, is the one I like best. But get those fucking pickles off it.

I decided a taste test was in order. I got both a Teen and the new “Beyond Meat” burger.

Before we get into taste, let’s examine some numbers.

Amazingly, the Teen Burger has slightly fewer calories, but saturated fat and cholesterol is much higher. Still, the vegan burger is not free of saturated fat, and its sodium is a bit higher than the Teen, which is surprising considering the Teen has bacon on it.

If someone gave me this burger and said it was chopped up cow, I’d believe them. I’ve seen a number of articles of people lauding the taste. My wife liked it too.

But the Teen tastes better. Because the Teen has cheese and bacon.

I tried eating just the burger part of each for comparison, and the taste was virtually indistinguishable, although there was a slight difference in texture. The real meat was a slightly chewier. The vegan patty falls apart in your mouth easier. Not saying one is better than the other, just an observation.

But one day, we will all be vegan.

I’m not about to go all militant vegan on you. I’ve been pretty clear how I feel about those guys. I don’t have any issues with eating critters, because they’re yummy and nutritious and humans have evolved to gain sustenance from them. Eating vegan can be done in a healthful way, as I pointed out in this piece, but being an omnivore is fine too, so long as you’re not embracing the dumb fuck diet du jour, because going high fat is not a great idea, no matter what the cholesterol conspiracy theorists purport.

Before getting into the how, I’ll do a brief overview of a world without meat.

Health
Semi-scientific books, shitty Netflix documentaries, and those aforementioned militant vegans have bullshitted aplenty o’er the health dangers of meat and the benefits of going vegan. Can you say a vegan spews bullshit? Whatever. It’s some kind of shit.

That’s not to say there aren’t health benefits. High meat and high saturated fat consumption aren’t good for you. Plant-based diets have proven benefits. My friend Dr. Spencer Nadolsky, who really knows his stuff about cholesterol and heart disease, did an experiment of going vegan and his bad cholesterol cut almost in half. He found a number of other health benefits as well. Of course, you can go vegan by eating potato chips and drinking Coke and it’s not going to be good for you. The point is to do vegan well.

There are reams of research and much debate, and I’m not turning this article into a book about it all. The reality is that the weight of scientific evidence is clear that we’d be better off eating less meat and more plants. Remember: heart disease is the #1 cause of death in the North America, and our ridiculously high meat consumption, and low plant consumption, is a primary culprit.

The Environment
Plenty of debate on this one too. Again: not writing a book here examining it all, but I’ll make a statement based on logic and observation.

It makes sense that no longer eating meat would be better for the planet for myriad reasons. Plenty of articles have been written with the “Nuh-uh” message of how using lots of water and plants to feed methane dispensers for years before we eat them is totally fine. But realize we’re dealing with a thriving industry that has a vested interest in pushing propaganda under the guise of science to make it seem like our desire to feast on farm flesh has no negative impact on the environment. There are lots of ways to twist the numbers to make it seem like it’s all peachy for the planet, but I am extremely skeptical that this is the case.

I’m not going to try and convince you either way. Do your own homework on it and decide.

Ethics
I’m pretty yeah whatever on this, because it’s the world I grew up in. Millenia ago, just about every society on the planet had slavery, and most people were fine with it. Except for the slaves, I imagine.

But if we don’t have to eat meat, then I suppose we probably shouldn’t. We could stop altogether.

This is one of the “arguments” the staunch pro-meat folks have that makes me laugh: the one about what are you going to do with all those animals. They’re just gonna die anyway blah blah.

Have you ever heard of phasing things out? When cars were invented, we didn’t go burning all the horse-drawn carriages and saddles on Day 1.

The point is that breeding of new stock for consumption would be reduced over time. Existing stock would be consumed and just not replenished if there were a better option.

So let’s talk about that better option.

The Future of Food
It’s going to happen, I am certain. Although I cannot say when.

We will all be vegan one day. And when I say “we,” I mean humanity. It may take another generation or three. One day, our ancestors will look back on the eating of animals and be horrified the same way we view human slavery.

I had to teach my kids to drive, and let me tell you how much fun that was. Will they need to teach their children to drive? Possibly not. What is almost certain is that my children’s grandchildren won’t ever need to learn. Just like I never needed to learn to ride a horse.

Human ingenuity has brought us some amazing things. The device I’m writing this article on is far more advanced than a manual typewriter. We’ve been to the moon, and if you say that was faked I will tell Buzz Aldrin and he will come to your house and knock you on your ass.

Cue Six Million Dollar Man music: “We have the technology …”

Well, not yet. But that A&W burger shows we’re making progress.

Here is my prediction: One day, in the not too distant future, you will be able to buy food that is 100% plants, but be indistinguishable from meat. Imagine a steak that:

It’s going to be technology combined with self-interest that makes the shift. If it can be done cheaper and healthier, we’ll do it. It’s not going to be those militant vegans guilt-tripping people with their obnoxious memes on Facebook that causes change. When you’re offered with a better product for less money, the holdouts for real meat won’t last. The market will decide, and eating critters will slowly be phased out.

I expect eating meat will become a niche market for the rich, and then eventually it will go away all together. One day, humans will look back on our meat-eating ways with disgust, much like the spacefaring character in that Peter Hamilton novel.

We’re not there yet. And so, in the meantime, I’m having steak for dinner tonight.