Bad Grandma: A Tale of Changing Your Path 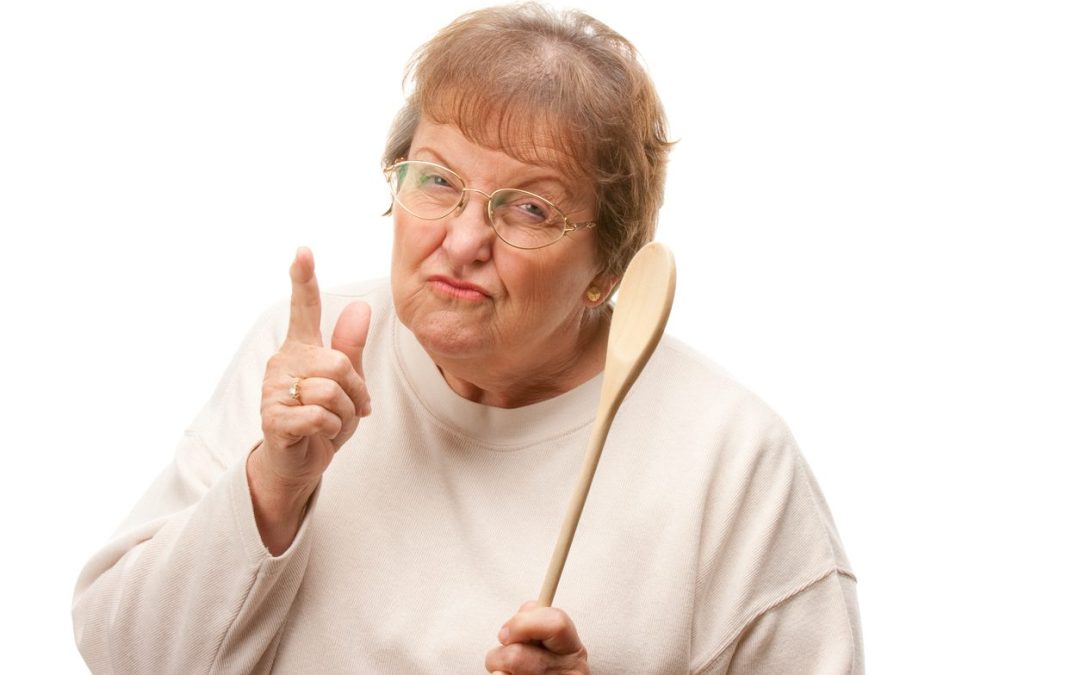 My grandmother was an evil and bugshit bonkers hell-beast of a woman who hated everything and everyone. A while back, we were having a family get together and my sister asked which kid had possession of grandma’s engagement ring.

“Isn’t that one of her Horcruxes?” my son said. I almost died laughing.

Speaking of crazy grandmothers and almost dying, there was blood everywhere, and I was screaming. The blood was pouring out of my left knee; childhood trauma provides vivid recollection despite more than four decades having past.

We were visiting my grandmother in Victoria. A friend named Brent was chasing me through the house in a game of tag, and the sliding glass door that led to the back deck was sparkling clean.

In other words, I thought it was open. I was only five.

Fortunately, I did not go through the window. I hit it with my knee, and fell backwards. Then, blood, plus screaming. This, followed by my uncle driving me to the hospital through the rolling coastal hills at a speed that punished the suspension of the pre-1970s model four-door car while my mother had a minor meltdown in the backseat as she attempted to hold my knee together with six squares of toilet paper.

I still hadn’t stopped screaming. I remember the screaming, not the pain.

Thirty stitches plus an annoyed doctor and nurse later, we went back to grandma’s house and she proceeded to chew me out about her shattered glass door.

That was my first inkling she wasn’t such a nice person.

It’s not good to air the family’s dirty laundry, but she’s been gone a long time, and while she didn’t have much positive impact on people’s lives while she was above ground, perhaps this lesson I’m about to share can allow her to provide some benefit to the living.

I achieved a fuller realization she was demonically cuckoo for Cocoa Puffs a few years after destroying her window. My parents divorced and we had no choice but to live with her for six painful months. I was getting an apple and she told me to give her half. I got a knife and cut, and being a young lad, it was a haphazard job. I was left with one piece substantially larger than the other.

It seemed wise to give my grandmother the larger half, so I did. Then she proceeded to berate me for being a “greedy little bugger.” She told me I should have given her the bigger half. I was looking at my half, which was about one-third of an apple, and then looked at her two-thirds of an apple, and said to myself: You really are a nutbag.

I won’t repeat any of the racist slurs she often spewed.

When I was 12 we moved into a new house and she came to visit. This house had a garbage disposal in the sink, which I thought was the epitome of cool. When I showed it to her she gave me a derisive look and said, “It’s some goddamn dirty Jew who invented that stupid thing.” I remember thinking, Really? If that’s true then Jews are awesome.

For 31 years, I watched my grandmother torment my mother. My mother told me horror stories about her childhood, and I believe them. Mom had one of the shittiest, most abusive childhoods you can imagine. So, yes, she’s a little neurotic as an adult.

But she is not at all abusive, quite the opposite.

I have never wanted for love. Mom showered my sister and me with love to the point it was almost annoying. “Yeah, I get it, Mom. You love me, but now you’re embarrassing me.” I always knew from my earliest days that, no matter what, mom had my back.

And yet, when she became pregnant for the first time with my older sister, there was panic. My mom dreaded she would be like her own mother and perpetuate a cycle of abuse. She spoke of this to her doctor, who gave her some simple yet poignant advice: “The suffering you’ve endured can be undone by loving your children with all your heart. Think of what your own mother would have done, and do the opposite.”

The advice sounded good, but did not fully resonate. The fear remained.

Later, at home, she felt my sister kick. My mother told me of feeling the growing child inside her. She believed the kick was a message saying, I am here, and I need you. Even though my sister was not yet born, my mother realized in that instant she loved her in a way she had never loved another person before.

In a moment, she knew she would never be like her own mother. Down to her core, she was certain she would be the most loving and caring mom she could possibly be. And she has been.

Such a sensation, where you achieve total clarity of purpose in an instant, qualifies for the word: “epiphany.”

I remember having my own life-changing epiphany once. I was in my 20s, and I was overweight, drinking far too much, flunking out of university, and deeply in debt. Then I read a simple quote by folk singer Joan Baez, of all people, who said, “Action is the antidote to despair.”

It was so simple to realize that all my problems could be fixed via concerted effort. Some face a world of disadvantage through no fault of their own, but the hole I resided in was of my own digging; I realized I could start building a ladder and climb out.

And so, I followed Joan’s advice and I acted. My despair waned.

Part of that action involved exercise. For 25 years, I hated physical activity of any sort. I had zero innate athletic talent. I was bullied for being uncoordinated, and chose 13 channels of shit on TV rather than going out for sports. But I transformed into someone who is now defined by fitness. It has given me far more than just a job. It changed my life for the better in ways beyond counting. Speaking of having a good life, my mom didn’t let her upbringing hold her back. She earned her corner office in a male-dominated industry, becoming a business juggernaut celebrated in the community. What’s more, she took a near-impossible high road with her own mother, putting up with her crap and continuing to look after her rather than write her off. She even forked out a lot of money for a nice nursing home when the old bat lost the last of her marbles.

The lesson is: The circumstances of the first part of your life don’t have to define the second part. No matter what transpired yesterday, or the days preceding it, this does not determine what happens on neither this day, nor the days yet to come.

No one makes it through life without scars. Some are visible, like the one on my knee, and others reside below the surface. The bullying and belittling I faced in school left its share of invisible scars, and for a time I let them define who I was, until it was time to change that.

Sometimes change happens rapidly and with an epiphanic moment. Sometimes it takes years and baby steps. Change is inevitable, but you’re the one who influences the direction such change will take.

If you’re tired of the path you’re on, you can switch to a new one. They’re your feet, and you have the freedom to place them where you choose.