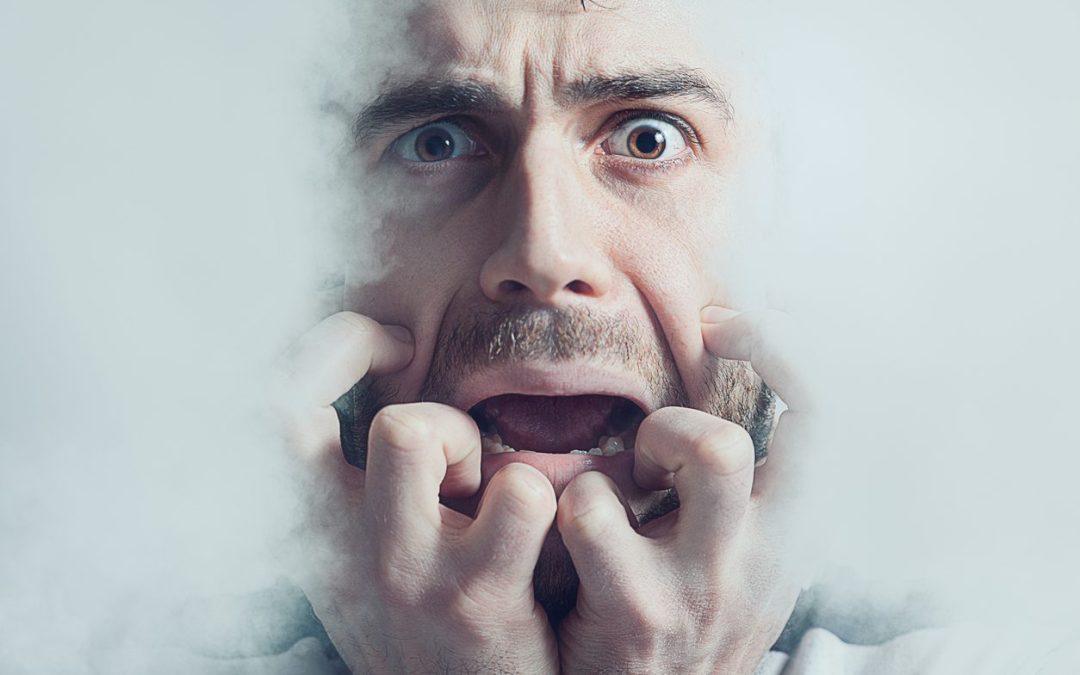 It’s a scene from that new show on AMC called Preacher. Some otherworldly power keeps flying around trying to find a religious figure to inhabit, seeking the right one. If they are unworthy, then you get homunculus guts blown all over a church full of Scientologists.

Or perhaps Tom just ate too much sugar, because that shit is totes toxic, yo.

There is a New York Times bestselling book entitled I Quit Sugar. I haven’t read it, because I quit something too; I quit reading stuff written by fear mongering idiots. The anti-sugar movement is dietary zealotry gone meth-infused apeshit. Perhaps they’re not sacrificing virgins to the star of Top Gun and praying to Xenu to rid their bodies of thetans – or something, I don’t fucking know – but there is ample comparison between religious practices and dietary adherence. Nowhere is this more prevalent than with the demonization of sugar.

It’s worth noting that dietary zealotry is nothing new.

“A primary function of religion was to bind communities together, and there is no better way to unite people than through purity laws about food,” Alan Levinovitz, a professor of religion at James Madison University in Virginia told me. Levinovitz, who is the author of The Gluten Lie, explained, “We’ve seen food used again and again in different cultures and religions as the identification of us/them or being in or out based on what people eat.”

Then he said of modern society, “Sugar is a really good example of this.”

Levinovitz and I talked of how pork is not kosher under Judaism or halal under Islam. “There is no amount of pork that makes it more or less kosher or halal,” he said. “Pork is forbidden, end of story. You see that same kind of religious attitude today with food that something is either made pure or impure by the presence of an ingredient, no matter how small or large, when people talk about sugar as either toxic or addictive. If they find something contains sugar in any amount they become terrified.”

Man, do they ever.

Things came to a head on my Facebook page recently when I created this simple, bullshit busting meme: 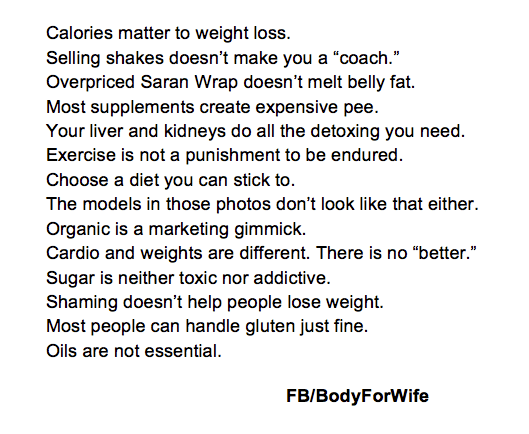 The posting of the meme was seen by almost 2.7 million people via my page alone. It got 4,400 likes and almost 12,000 shares. It also garnered my page over 3,000 new followers in just a couple of days and there were over 200 comments, many of them spawning lengthy threads.

It’s the comments that prompted me to write this article, because holy shit.

There were some who took issue with my claim that organic is a marketing gimmick (it is) and people who didn’t get the joke about essential oils. (Yes, I know it’s about the “essence,” but when you sell them via MLM and claim they fight cancer then I’m gonna make fun of you.)

But as you may have guessed from the title, where people really misplaced their excrement was over the claim that sugar is not addictive.

You think militant vegans are nuts? Well, they are, and I’ve written about them before. And even though the article was popular there wasn’t much pushback from that piece. Most vegans – the not crazy ones – thanked me for writing it and shared the article because they didn’t like getting grouped together with all the fruit loops.

Historically, I got the Team Beachbody zealot invasion over my Shakeology article and the It Works! weight loss Saran Wrap folks were a derp-filled riot over that article. But it was fascinating to see how many people agreed with every claim on the meme except for what I wrote about sugar. It was like their entire identity is built around hating on poor old C12H22O11.

The low-carb zealots are a special brand of keyboard warrior. Whether I’m calling paleo the Scientology of diets, poking fun at those whose nutritional protocol requires peeing on a stick, or writing an open letter to Gary Taubes, they always come out in force to express their displeasure.

But this defense of sugar as addictive was a new level of all caps commando. People are deathly afraid of the stuff, and I’m an idiot for questioning its cocaine-like qualities.

“It’s what psychologists call the monotonic fallacy,” Levinovitz said. “It’s the idea that if a lot of something is bad for you, then even a little is also bad. Sugar is something where that religious attitude of corruption or impurity is replicated.”

And so, they treat it like cigarettes or crack or heroin. No amount is considered safe, and if you consume it, then you’re doomed to become an addict. And because I assert that moderate intake is fine, I’m the enemy.

“They use the consumption of impure foods to marginalize other groups,” Levinovitz told me. “They do that to make themselves feel different and better and more pure.” He even said that, historically, ancient religions used a lot of food-based insults such as “shit eater” or “frog eater” to demean people. I’ve been called “sugar burner” as an insult by low carbers because I like to use carbohydrates to fuel my exercise efforts.

In regards to the alleged addictive nature of sugar, I spent two years co-authoring a book with a woman who has a PhD in the psychology of eating behavior, and this was something we looked at in depth. I turned a portion of that into an article showing that, no, specific foods aren’t addictive, although for a small number of people eating can be. The lack of evidence for sugar addiction got a lot more traction just this month with a review of the research published in the European Journal Nutrition.

Humans are not rats. And when you starve rats and give them a choice of foods to binge on, it’s a “Well, duh!” that they’re gonna go for the highest calorie stuff. If you haven’t eaten for a long time and are given a choice of pizza or celery sticks, which are you going to reach for? If everyone goes for pizza, does that make it addictive?

As a result of all the hubbub, I created a second meme, just to poke the sugar-free bear, and the rectal discomfort renewed. 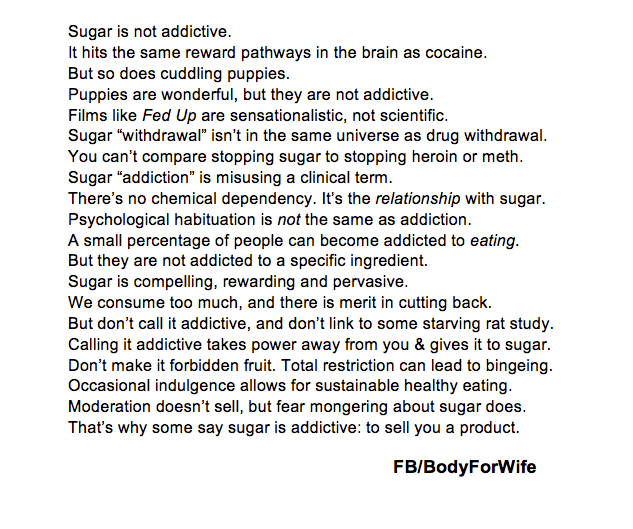 “Dietary zealotry has been around forever,” Levinovitz said, “but nowadays science has occupied many spheres of authority that were once the domain of religion. What is new now is the masking of what is ultimately a spiritual belief with science. They wrap spiritual or ethical or religious beliefs about food in scientific rhetoric.”

On one side, the reason why Jews keep kosher, why they don’t eat things like pork, is because they believe God forbids it. Unless you’re a militant atheist trying to purge the world of religious beliefs, most people are going to mind their own business in that regard because there aren’t a lot of PubMed abstracts you can throw back and forth about what God did or did not say about bacon.

But Levinovitz spoke of “masking” a spiritual belief with science, and that’s what we see with things like the vilification of sugar. Despite some pretty overwhelming evidence to the contrary, they’ll cling to a 9-year-old starving rodent study that somehow invalidates the body of research on the subject. Goalposts are moved, logical fallacies are perpetuated, and no amount of evidence will deter the faithful that sugar is more evil than Satan’s taint.

Like I wrote in the title: totally fucking batshit.

But what’s the harm?

“When you demonize sugar you make it impossible to enjoy a favorite family dessert during the holidays,” Levinovitz said. “You’re making a kid’s birthday into a crisis of faith where you have to decide whether or not to ‘poison’ your child. You’re turning cupcakes into cigarettes, and while there isn’t really a healthy level of cigarettes or crack cocaine, there is a health level of sugar you can give to a child or an adult.”

And we’re not saying just a “safe” or “harmless” levels of sugar, but actually “healthy,” because it is healthy to be able to go to a birthday and be able to enjoy a piece of cake. Psychologically, it’s good for you. And it’s good for dietary adherence as well.

In his book The Diet Fix, my friend and obesity researcher Dr. Yoni Freedhoff writes, “We’re just not built to needlessly suffer forever.” He also writes of the importance of “a prescription for chocolate.”

Total restriction means suffering. Fear mongering over sugar creates a forbidden fruit mentality. Occasional indulgence isn’t going to toxify your innards or make you into a hopeless sugar junkie constantly Jonesing for a fix. Rather, it keeps you sane instead of in a cycle of restriction-binge-restriction-binge.

By why “addiction”? Why did this failed hypothesis get so much support from diet cultists? I have my own hypothesis that I’ve gleaned from years of writing about this industry.

It’s about telling people what they want to hear.

I have witnessed in the realm of weight loss time and again that when you tell people what they want to hear they will throw money at you. “Miracle method” promises of “quick and easy” always outsell the more rational and science-based programs for weight loss. Likewise, people want an easy explanation as to why they have difficulty resisting sugary treats. Saying it’s addictive absolves them from blame. It’s not their fault they plowed through a pile of Oreos, it’s because the sugar in them is “addictive.”

And yet in a lot of ways it really isn’t their fault. But the answer as to why it’s not is far more complex than “sugar is addictive.” It’s not addictive, but it’s pervasive and heavily marketed. It tastes really good. It’s compelling and added to a lot of foods and the more we get exposed to it in everyday foods and use it for comfort eating the higher the likelihood that we have difficulty resisting cravings. There is merit in being aware of added sugar and endeavoring to cut back.

There are a whole host of reasons for rampant obesity, and none of them are that “sugar is addictive.” There are also reasons why low carb diets work for some people, and none of those reasons have anything to do with “detoxing” from sugar or breaking a supposed addiction to it. (Related note, not only is sugar not addictive, it’s not inherently toxic either.)

It is interesting to note that a lot of the same people who proclaim sugar as addictive will laud saturated fat as the solution to one’s dietary woes. Alan Levinovitz explained this succinctly: “If something is going to damn you then you need something that’s going to save you.”

If sugar is evil, you must replace it with something “holy.”

But fat is okay because “The evil government told us not to eat it so it has a counter-cultural cachet,” Levinovitz told me. “It’s very religious with providing inside knowledge that no one else has. It’s empowering. It distinguishes you.”

Will this article convince any of the anti-sugar zealots to see the light of moderation? That is doubtful. But perhaps it will help those on the precipice from falling down a hole into a cave full of fear mongering batshit.