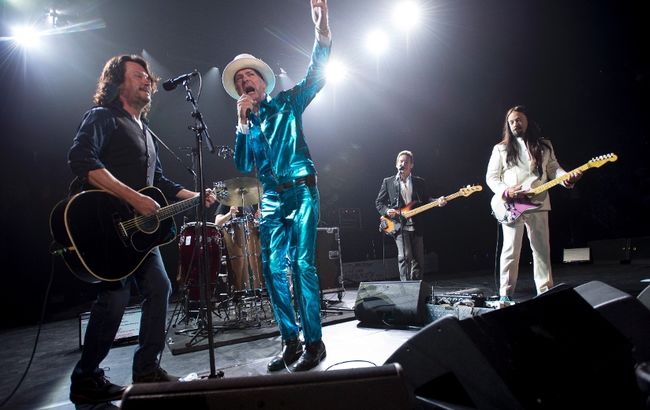 Gord Downie is dying. We drove a thousand kilometers to see him one last time and bid farewell.

Downie is singer for The Tragically Hip. If you have not heard of the band, it means you’re not Canadian. While they have pockets of followers south of the border, they are our band and we don’t share them much. Nine of their 13 albums have reached #1 in Canada.

Hailing from Kingston, Ontario, band members still call the city of slightly more than a hundred thousand people home; they never felt the need to move to a major metropolitan center as their fame grew. Hip lyrics are peppered with references to Canadian history, landmarks and locations. Over the decades they’ve toured back and forth across the north-of-49th landscape so many times that even moderate Hip fans have seen them at least a few times. One fan in our skybox at the July 24th show at Rogers Arena in Vancouver has seen them 20 times. For me, I think this was number 6.

Last spring Downie revealed he has glioblastoma. In lay terms it is referred to as a brain tumor. It’s the kind of tumor for which there is no cure. Glioblastoma is something I’m unfortunately familiar with. It has robbed my family.

But a lack of a cure doesn’t mean modern medical treatment isn’t worthwhile.

The usual approach to treatment for glioblastoma is surgery to remove as much of the tumor as possible, often followed by radiation and chemotherapy. The American Brain Tumor Association states median survival is 14.6 months. Their cause is unknown.

Because glioblastomas have “finger-like tentacles,” it is challenging to remove the entire tumor. They inevitably migrate into other parts of the brain. With our current level of medical knowledge, there is no cure. There are no alternative medicine “miracle” cures either. Despite what some proclaim, there is no evidence that alternative medicine has ever cured a single person of their cancer. Conversely, those who opted for an alternative treatment when facing other types of cancers have lost their lives when modern medicine likely would have saved them.

When faced with a terminal diagnosis, some may take an “It’s worth a shot” approach to alternative treatments. However, modern treatment is still the way, because it can keep you both alive and lively, for a time.

And when such a diagnosis happens, it’s all about time, how much you have left, and what you can do with it.

Gord Downie doesn’t have much time. He wants to make the most it. According to the Globe and Mail, Downie had most of the tumor removed via surgery to relieve pressure on the brain. Additionally, “After surgery, Mr. Downie underwent six weeks of daily Monday-to-Friday radiation treatments combined with an oral chemotherapy drug called temozolomide.” He is also receiving “maintenance chemotherapy” during what will almost certainly be the band’s final tour.

It was after going public with the diagnosis in May that The Tragically Hip announced their cross-country tour, starting in Victoria, British Columbia and working their way eastward to finish next month in their hometown of Kingston. Due to demand, they’re playing two shows in Vancouver, Calgary and Edmonton, and three shows in Toronto.

What Gord Downie has undergone and continues to receive is referred to as “palliative treatment.” According to Cancer Research UK, “Palliative treatment is designed to relieve symptoms, and improve your quality of life.”

A glioblastoma comes with nasty symptoms and negative effects on quality of life. Although treatments such as surgery, radiation and chemotherapy are never considered fun, they are what we currently have available that work, and the cost-benefit analysis is usually positive.

Modern medical treatment is what is allowing for The Tragically Hip to do this countrywide tour. As I mentioned before, the treatment isn’t just about keeping a person alive, but also lively.

Gord Downie was very lively on Sunday night, as was the crowd.

My friends and I were most fortunate to be asked by my friend and fellow fitness expert Mike Howard (visit his website and follow him on Facebook) to join him in his client’s skybox for the show. I’d never had the opportunity to watch a concert from a skybox before, and it made the evening extra special.

I have been to many concerts in large arenas with cheering crowds, but I have never before witnessed what I did two nights ago. Last Sunday evening the crowd was part of the show. Filled to capacity, Roger’s Arena contains many thousands of seats that were barely used. All but a few hundred never sat in them for the entirety of the performance. Cell phones were used not so much to record, but as modern Bic lighters to light the stadium in solidarity. The thunderous roars and sing-alongs put others to shame.

Gord and the rest of the band gave us one helluva show. (Read this review in the Globe and Mail.)

For two hours they played, and Gord’s unique voice sounded as amazing as I’ve ever heard it. You had to be there to truly understand the impact of the crowd on the performance. Though it was never mentioned, we knew this was it. We knew it was goodbye: from Gord to the fans, and from the fans to Gord. This would be our last chance to cheer, so we cheered for all we were worth.

The Tragically Hip did everything they could to make the concert amazing and memorable. I wrote this piece so that people would understand the role of modern medicine in making such a night possible. Without medical treatment, it likely would not have been.

So I wish to thank not only Gord Downie and the rest of The Tragically Hip for such an experience, but the physicians and researchers who toil endlessly to save, extend and improve the lives of cancer patients.

And finally, a special thanks to Mike Howard’s client for the use of his skybox. I understand that Canucks’ Autism Network is near and dear to his heart, so I will be making a donation. I would also ask that, if my writing has ever helped you, that you make a donation, even a small one, as well.