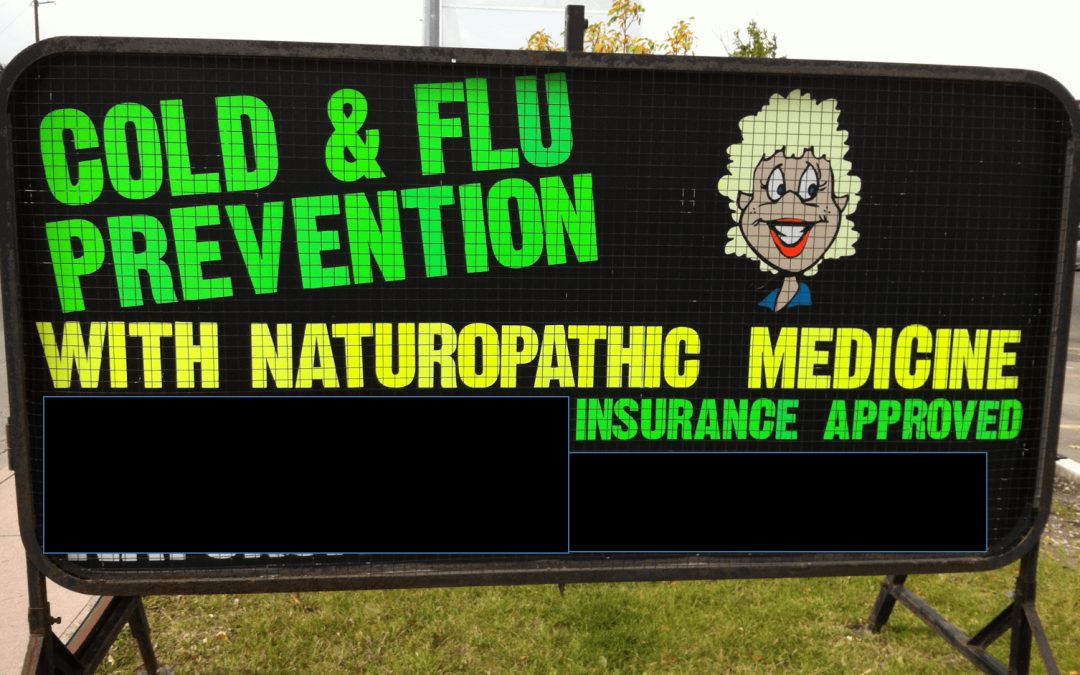 The feature photo of this article, which I saw while out of for a recent bike ride, is the kind of thing that drives me bugshit, because there is negligible benefit to visiting a naturopathic “doctor” to prevent the flu. Why do I put “doctor” in quotations? Because a naturopath is not a real doctor. There is a joke that says ND stands for “not a doctor,” except it’s not a joke; NDs don’t practice real medicine.

Alternative medicine harms and even kills people that need not die, while rarely providing value, because it is often used instead of real medical treatment. Alt med is mostly a wasteland of false promises, and so I rail against it.

Imagine this scenario that, sadly, happens with regularity:

A medical doctor tells a patient she has breast cancer. The doctor recommends a full mastectomy along with chemotherapy and radiation treatment, but they’ve caught it early enough that her prognosis is excellent and she’ll most likely have a full recovery.

Regardless, this is still not fun news to receive. Cutting off a breast? Chemo? Radiation? All that stuff sucks. Medical science is far from perfect, but it’s what we’ve got. Evidence-based medicine is the only thing we know that works, and it does save lives. It saves lives all the time.

But the patient doesn’t like this news. The road to removing the cancer is painful for the patient, but less harmful than leaving it untreated.

Some alternative medicine practitioners take advantage of this situation. They say they can cure the cancer with herbs and juicing and whatnot. And people believe them, because they’re desperate. So they get the alternative treatment, and they get sicker.

And then it’s too late. What once had a high probability of being cured has spread and become a terminal illness. (Here is but one story of this happening.)

It’s an extreme example that unfortunately is all too common. In the case of the flu shot, people imagine that vaccines are toxic and/or useless because of people like the Food Babe, Dr. Mercola, Bill Maher, various mom bloggers and a teenager who faked having horrible muscles spasms after getting a flu shot.

Flu shots are not perfect, but to quote Dr. Ben Goldacre’s analogy of alternative medicine: “just because there are problems with aircraft design, that doesn’t mean that magic carpets really fly.”

Medicine is science based. Alternative medicine often isn’t and is only an alternative TO real medicine. You can learn more about alternative medicine here and more about naturopathy here. You can also read confessions of a former naturopathic “doctor” here. In one blog post, the former ND Britt Hermes wrote, “After researching the practices of naturopaths across the United States and the disciplinary actions by naturopathic medical boards, I believe that unethical practices and chronically anemic regulation are endemic to the profession. Patients are at serious risk of being hurt.” And on her About page she wrote, “I discovered that the profession functions as a system of indoctrination based on discredited ideas about health and medicine, full of anti-science rhetoric with many ineffective and dangerous practices.”

Nevertheless, people who fear real medicine will often embrace useless quackery as an alternative. Not only useless, but also harmful.

To break down how useless and harmful going to a naturopath for flu prevention is, I spoke with Dr. William Schaffner, who is Chair and Professor of Preventative Medicine at Vanderbilt University in Nashville.

On “Boosting” the Immune System

As a starting point, Dr. Schaffner and I discussed this article, “Preventing and Treating the Flu – A Naturopathic Perspective.” Written by a pair of NDs practicing “medicine” in Enfield, Connecticut, Dr. Schaffner said that the only evidence-based advice in article for preventing the flu was the part about washing hands.

But what about all that stuff at the beginning of the article about healthy living? The parts about sleep, exercise, and a diet high in fruits and vegetables sound good, don’t they?

“It’s never been demonstrated to prevent people from catching the flu,” Dr. Schaffner said of healthy living. “At best it would have a modest effect.” That doesn’t mean being in robust health is useless, but it’s important to understand relative risk.

Schaffner explained that many people can become infected with influenza and get only mild symptoms, and others still have an asymptomatic infection. “On the other hand, other people get very sick and some even die from influenza.”

And it’s not that being healthy allows you to avoid the flu, it’s that there are certain characteristics of people who get more severely ill.

“The single most important determinant of how sick they’re going to get is that they’re older,” said Schaffner. And the second most important determinant is having an underlying illness such as diabetes (either type 1 or type 2), or a predisposing lung or heart disease. Also at greater risk are those who are immune compromised from a disease such as HIV/AIDS or are receiving treatment such as chemotherapy that can make them immune compromised.

So, take good care of yourself with diet and exercise, and get enough sleep. You don’t need an ND for that.

“However,” I had to bold that because Dr. Schaffner practically shouted it, “year in and year out all clinicians see young children and young adults in robust health who wind up in the emergency room and in intensive care with life-threatening influenza. Even if you’re an Olympic athlete there is no guarantee you won’t get sick. It’s just a risk reduction.”

As far as “boosting” the immune system goes, “It’s a bogus concept,” Schaffner said. “You will not find it in the medical text books.”

This was the one ND recommendation from the article that made any sense, but it’s far from a guarantee of infection.

His response? “There is no evidence that any of those supplements prevent influenza or any other respiratory infection.”

Schaffner considers visiting an ND and taking that expensive supplement regimen to be not only a waste of money, but potentially dangerous.

“These supplements are not regulated the way medications are,” Schaffner said. “They vary a lot depending upon the manufacturer. Some of them don’t even contain what it says on the label. And there have been a whole series of studies showing contamination as well. You’re exposing yourself to a series of unknown risks for no demonstrated benefits.”

The Only Real Prevention

“The most reliable way to prevent influenza is to stimulate the immune system by getting vaccinated,” Dr. Schaffner said. “Everyone six months of age or older should get vaccinated against influenza each and every year to prevent infection.” Unless such a vaccination is medically contraindicated due to an illness or treatment. It’s important to note that we need to be vaccinated against influenza each year because the strains mutate. Last year’s shot won’t help for this year.

“Vaccines work by faking out the immune system,” he said. “If we get infected by the real influenza virus our immune system responds by developing specific antibodies against that viral strain. If we encounter that virus again our immune system will be prepared and will fight that virus.” And vaccination works the same way. You don’t get the flu, but you teach your immune system how to fight those strains.

With vaccination, immune system is primed to fight. If you’re not vaccinated, it’s like standing there with your eyes closed and hands at your side while the virus comes in with a punch levelled at your face. If you have been vaccinated, your eyes are wide open and you’re ready to fight back (as long as it’s one of the strains you were vaccinated against). Sometimes, your immune system fights so well it immediately kills the virus; others times the infection only gets in a few jabs before you fight it off.

“It is not a perfect vaccine yet,” Schaffner explained. “Among young healthy people it will more often than not prevent illness entirely. Among older and infirm people, it doesn’t prevent the illness entirely but it makes it milder. You won’t end up in the hospital and you won’t die.”

The Real Problem with Naturopathic “Medicine”

“People who are inclined to use naturopaths avoid vaccination; that’s the thing that bothers me the most,” said Dr. Schaffner.

As I mentioned earlier, alternative medicine is an alternative to medicine. Meaning: instead of choosing a scientifically proven method of illness prevention / treatment, they utilize something that is the medical equivalent of crossing their fingers. “There are people who want to do things in a ‘natural way’,” Schaffner said, “and I understand the desire to do that. Unfortunately, it’s just not effective. One wishes it was, but no one has demonstrated that it works.”

Two days ago I was stung by a wasp on the thumb and my entire hand is swollen, itchy and in pain. But a wasp sting is natural, so … that’s good?

So-called natural medicine creates walking disease bags who venture out into the world among us. “No one wants to be a dastardly spreader,” Schaffner said, but that’s exactly what they are.

Help yourself, and help others. Get your flu shot.

To learn more about the prevalence and dangers of influenza, as well as debunking myths and explaining efficacy and safety of the flu shot, read my article here.